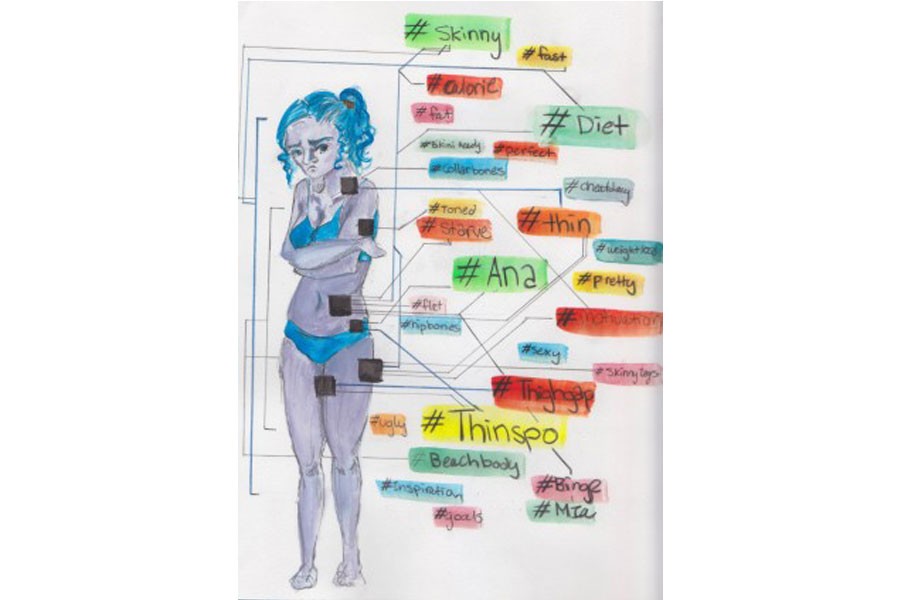 Hashtags like these can be found all over Instagram, but few realize the photos posted with them can fuel eating disorders and body image issues.

“On Instagram, people are posting altered pictures of themselves 24/7,” says Evanston therapist Julie Portnoy. “If social media is constantly saying that you have to look a certain way, teens feel the pressure to do anything to look perfect.”

In recent years, there has been a rise in the number of Instagram accounts that promote disorders such as bulimia and anorexia. These accounts feature images of mostly young girls with protruding rib cages and hip bones, thigh gaps and rail thin legs.

Portnoy says that pro-bulimia and pro-anorexia (known as pro-mia and pro-ana on Instagram) accounts can perpetuate the behavior. “Most teenagers are very impressionable. If you read and see other people harming themselves, it could provoke the same behavior in you,” says Portnoy

Instagram has taken steps to reduce the presence of these accounts and hashtags. In 2012, the company began removing “accounts, images, or hashtags dedicated to glorifying, promoting, or encouraging self-harm,” according to a media release. Instagram also advised users to report any images they think are harmful.

These accounts, however, are making a resurgence. Users get around Instagram’s restrictions by putting their accounts under different names, or adding extra letters to hashtags.

Also, students have also taken notice of prevalence of eating disorders on Instagram and the effects.

“Those pro eating disorder accounts are not only extraordinarily offensive, but show a glamorization of disordered eating that is really misleading,” says sophomore Aurora Wood, who is recovering from an eating disorder herself.

Wood adds that these accounts post “glamorized lies” about eating disorders, and are thought of as lifestyle choices rather than serious conditions. “Nothing about these disorders is glamorous. They are deadly. It would be like someone romanticizing cancer, and that’s just not right.”

Also, Instagram accounts that posts about clean eating have led to rise of a new eating disorder called orthorexia. These accounts often portray the problem as positive, while it is doing the opposite. Those who suffer from orthorexia have a pathological obsession with the purity of the food they eat, so much so that it interferes with their social life and mental health.

Medical professionals do not yet recognize Orthorexia as a clinical diagnosis, but many are coming forward to bring attention to the negative effects of restrictive dieting or eating clean. For example, many clean eating diets have been known to cause infections and dangerous levels of malnutrition.

While the growth of social media has lead to an increase of eating disorders among teens, some in recovery use social media as a place of positive change.

“Me and some other girls who I have been in the hospital with have private Instagram accounts where we share our struggles and stories of recovery to help motivate one another,” says Wood.

Accounts like these are combating the pro-ana or pro-mia images, and are also inspiring others to take steps toward recovery. “These accounts promote positive body images, and that does nothing but good for teens who struggle with their own image, says Portnoy.

Portnoy also emphasizes that this issue can affect all teens, regardless of gender. “You traditionally think of kids with eating disorders as white, middle class, teenage girls, and that is not always the case.” According to a study done in 2011, over 10 million men in the United States will suffer from an eating disorder sometime in their lives.

With Instagram and social media in general becoming more and more influential in our society, taking notice of ways eating disorders and body image issues are shown can help prevent these problems from occurring in the first place.

If you think you or someone you know may be suffering from an eating disorder, call the National Eating Disorders Association hotline at 1-800-931-2237 or visit their website at nationaleatingdisorders.org.