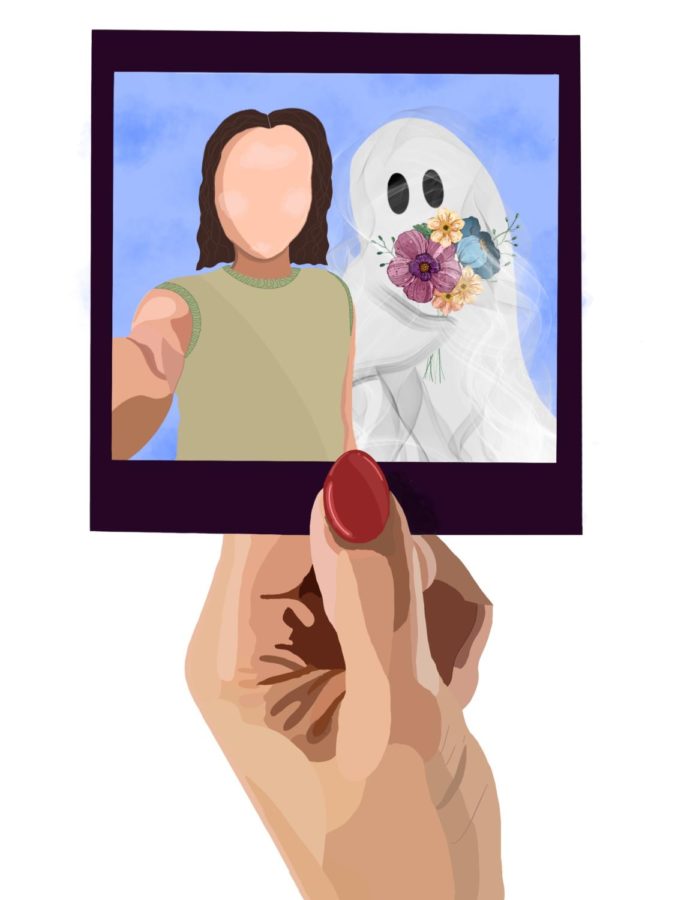 ETHS has a problem: its students are haunted. There’s a sinister force at work in our lives, infiltrating the hallways of the high school and haunting romantic and platonic relationships alike. This supernatural relationship phenomenon is called ghosting.

According to the New York Times, ghosting has been defined as, “when someone cuts off all communication without explanation.” The method of ending a relationship has become so widespread that the New York Times reporter Adam Popescu even went as far as to report, “A ghost is a specter, something we think is there but really isn’t. We’ve all probably acted like this if we’re honest. We’ve all probably been ghosted, too, though sometimes we probably didn’t notice. These are supernatural times.”

At ETHS, the definition has become even more specific. According to junior Kodie Winkler, it can be defined as, “Quickly and immediately cutting off all contact out of the blue—[sometimes] not even out of the blue, [but] just cutting off all contact either online or in person.” Though ghosting has a wide range of depth and misfortune, as technology becomes perpetually more ingrained in our lives, it is undeniable that ghosting is becoming more popular. But as one ducks under the cloak of invisibility, the effects of their actions run deep.

“[It makes people feel] pretty bad,” Winkler says. “It can really kind of mess you up, if you don’t know why… [There’s no] closure for both parties [or for] one party. Sometimes [closure is] really necessary. And that doesn’t come with ghosting.”

Much of the discomfort of ghosting comes from this lack of closure, as explained by Popescu. Without closure, people are left in a state of ambiguity, often leading them to question their behavior in the relationship, which can eventually impact their self esteem.

“For the [person who’s ghosted], it’s degrading in a way, because you don’t know what you did, and this person you thought was close to you just threw you away like you didn’t [matter],” sophomore Caroline Christon says. “Especially for high schoolers and teenagers, because everything’s usually about them, we always turn in and we’re like, ‘What did I do?’ And I think what a lot of people fail to do is think, ‘I didn’t actually do anything. It’s their issue. They have an issue. It’s not my fault.’”

Even further, being left high and dry with no explanation can impact future relationships, as observed by senior Damascus Wheeler regarding his friends who have been ghosted.

“A couple of my friends are scared of commitment now, because they’re scared if they open up to someone, then they’ll leave them again,” Wheeler says.

On the other hand, ghosting can impact the ghoster as well.

“I don’t think a lot of people talk about how the ghoster feels,” senior Peyton Hinterhauser says. “I don’t think anyone necessarily likes to ghost someone, because people feel bad. [Ghosters] have empathy. They’re like, ‘I wouldn’t want this to happen to me, but I really don’t know what else to do.’… You feel guilty afterwards.”

With that said, Hinterhauser believes ghosting can be warranted, and at times, a necessity. In one case, she ultimately ghosted someone because she thought it was the best way out of a bad situation.

“They just were not getting the hint,” Hinterhauser reflects“And I didn’t know how else to do it without being straight up in their face, [saying], ‘I don’t like you. Please leave me alone.’ I think that’s really, really mean. Ghosting is a different kind of mean, because you don’t want to be upfront and say it directly to their face, but your actions are saying it for you.”

While the argument over which is worse—an uncomfortable conversation or no conversation at all—is debatable, it sits at the root of why high schoolers have begun ending their relationships with radio silence. According to Wheeler, the answer lies in emotional immaturity.

According to former head of Los Angeles’ Cedars-Sinai Medical Center psychotherapy program Jennice Vilhauer, this is true. “A lot of people anticipate that talking about how they feel is going to be a confrontation. That mental expectation makes people want to avoid things that make them uncomfortable,” she said in conversation with Popescu.

Rather than cutting off communication, Winkler, Wheeler, Hinterhauser and Christon all believe the proper way to end a relationship is with a conversation.

“I think, [with] any sort of emotional connection you have, you should have the decency to tell someone, ‘I don’t like you’ or, ‘let’s take a step back,’” Wheeler says. “I feel like you deserve to give them that so they’re not wondering what they did wrong in the future.”

But as teenagers, many of us with limited emotional vocabularies, ghosting acts as the perfect escape from the fear of a difficult conversation.

“When you’re in high school, I think you can get away with a lot more things because you’re immature and you haven’t fully experienced life yet,” Hinterhauser says. “Ghosting someone is such a childish thing to do, in my opinion, so teenagers can get away with it because they’re children. But when you’re an adult, you can’t get away with as much, because you should know better. You should just be able to tell them, ‘I don’t like you,’ and they should be able to take it like an adult.”

While ghosting may be more acceptable when you’re young, it may also be more difficult. In high school, especially one in which all of Evanston’s teenagers attend under one roof, is it possible to truly and completely ghost someone?

“We’re in the same building, and you’re going to see them all the time. Their friends are friends with you and your friends, and you’re way too entangled in each other’s lives to be able to actually ghost someone for real [in high school],” Hinterhauser says. “You just have too many roots. It’s too entangled to effectively do it.”

Along with ending contact in romantic relationships, some find that they become “ghostees” within friendships. Though breakups hurt, the sudden death of a long friendship is an unanticipated pain like no other.

“I was ghosted by my best friend of five years,” Christon says. “She and I found out that we were going to different schools, and I don’t know what happened, but she stopped texting me [and] ignored me… When we were in sixth grade, I was still trying to keep contact, trying to keep the friendship alive, because we weren’t seeing each other very much.”

Christon goes on to describe her situation, in which two of her best friends stayed in touch, yet one of them deliberately blocked her out, and eventually stopped responding completely.

“On social media, she still followed me, but I still would say happy birthday to her and stuff. [She] did not read my message. Nothing. I remember thinking, ‘This is not my fault,’ because I don’t know what I did,” Christon shares.

Regardless of the way it’s done, ending a relationship in high school is extremely difficult. It’s awkward, it’s uncomfortable and it’s the reason why ghosts will continue to roam the halls of ETHS for the foreseeable future.