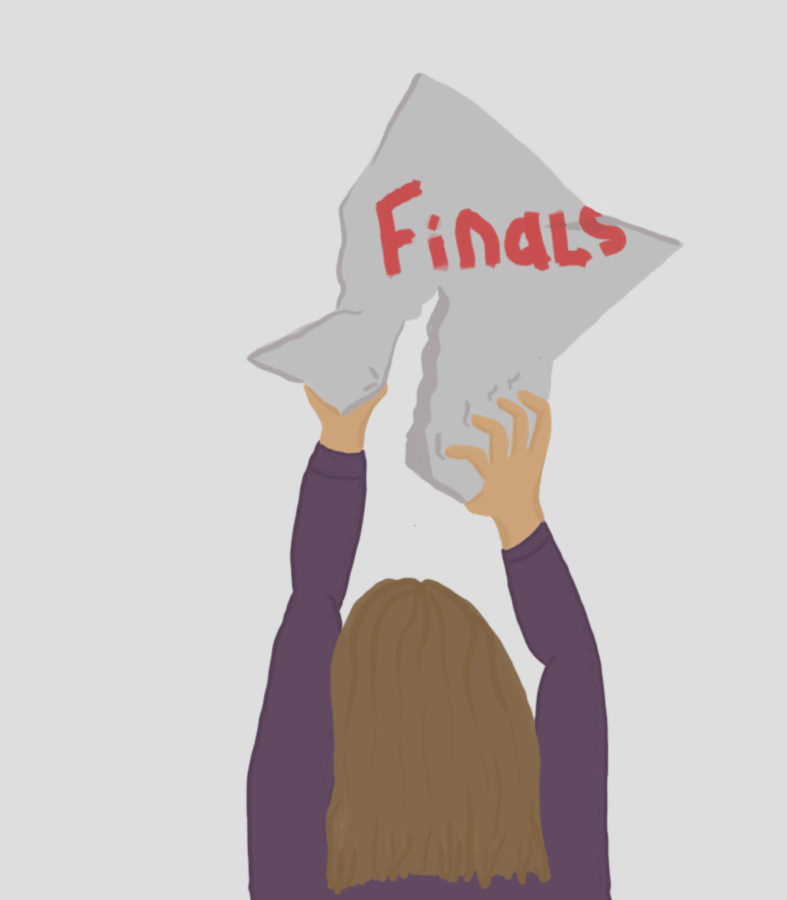 As of spring 2021, ETHS announced it would be eliminating end-of-semester final exams from the school curriculum. Previously, ETHS students had a week of final exams from every class at the end of every semester. At the time, teachers could choose what kind of exam they wanted to give, and finals were worth 20 percent of students’ semester grades.

Different students had a variety of experiences with finals. Senior Daryn Kaplan remembers finals week to be fun, but tough.

“I remember I had one or two [finals] each day. I remember I enjoyed finals week, because the schedule made it so that I could go out to lunch after [the test]. But I didn’t enjoy the weeks leading up to it, the preparation—a lot of cramming everything into my head at once,” Kaplan recalls.

The stress of finals is certainly not exclusive to Kaplan. Countless other students experienced a similar level of stress throughout the weeks of (and leading up to) finals. With e-learning eliminating finals for the first time, many students felt a rush of relief without worrying about semester exams.

“It can be really stressful to take finals, especially [after] how last year was online school, it would have been much harder. I think it could have really stressed people out,” says sophomore Anna Meyer.

When quarantine began, ETHS cancelled finals for the second semester of the 2019-2020 school year as well as finals for the 2020-2021 school year. ETHS announced moving into this current school year that final exams as students knew them would be removed indefinitely. However, teachers still may choose to give students some form of cumulative assessment at the end of the semester.

Teachers have quickly adapted to the new standard for semester assessments, rapidly developing different ways to make up for the elimination of finals. Many teachers, encouraged by the administration, have started using project-based assessments.

“My plans [for finals] depend on the class. For Civics, my plan is a broader project that hopefully pertains to student interest, as opposed to a traditional exam,” history teacher Michael Pond says.

Apart from sponsoring the Student Union, Pond teaches classes such as Civics and AP US History. He recognizes that different classes require a different adaptation to the elimination of finals.

“With my AP students, there is a College Board exam that they’re taking in May. I do know that a number of students want to find success on that exam, and, therefore, they do need that practice,” Pond says. “For my AP US History students, we are having more of a traditional exam assessment.”

Pond’s teaching focuses heavily on learning the skills needed to succeed in future classes and other settings. To him, assessments aren’t about giving a permanent grade on what students have learned.

“I also allow students to revise after they’ve taken the assessment. That’s important to me, and hopefully important to students too, because it’s not a one-and-done kind of thing,” Pond shares. “It says that the education process is ongoing, and that my goal, and your goal, should be growth.”

Many students prefer projects over traditional written exams. Projects give students more freedom for expression and the ability to individualize their learning to their interests. They also emphasize overall understanding of subject material rather than raw test-taking abilities.

“I think that finals as a project definitely is better than finals as a test. If you’re very good at taking a test, then it shows that skill, but it doesn’t necessarily show your abilities as a student and what you actually know. A project that is [an] accumulation of all your knowledge,” Kaplan says.

However, exam-based finals may be important in certain subjects or fields of study.

“I do think that there are some subjects that require [finals]. [History classes are] more about developing skills; there’s a lot of information out there. I want students to be prepared to harvest information in a way that’s responsible. That said, there are some courses [or] careers in life, where having a final assessment or final exam are probably valuable. You wouldn’t want to go to a surgeon for a brain or heart surgery who had never taken an exam before or had unlimited revisions, right? So in certain fields, I see the value of having a final—language [or] math might be one of those [subjects]. But for my particular subject area, I don’t see a lot of value in a one-and-done assessment,” Pond explains.

In part because of the difference in subject, some teachers have chosen to continue giving classic cumulative exams at the end of the semester.

“I think my math teacher is going to give out a final but she’s not calling it a final. She says that it’s going to be an ‘end of the semester assessment’. It’s going to be on everything that we’ve learned so far,” Kaplan says.

Similarly, AP Biology teacher Teresa Granito is choosing to give an end-of-semester exam.

“I’m giving my students a cumulative test a couple days before the end of the semester. We’ll probably have a week to review the content,” Granito says. “I’m doing that because I feel it’s important that, after learning all these individual topics, cumulative exams have helped to put all of those concepts together and see how they’re all connected. It’s not going to count like a semester exam used to count; it’s just going to count as a regular unit test.”

“I don’t think it’s good for the kids to have six or seven classes, all of them doing projects. I know a lot of universities are switching to more projects rather than exams, but I know there are still exams. I think a combination of both for the kids is good.” Granito says. “I know that, in college, kids are going to have midterms, they’re going to have semester exams, whether that be a project or paper or multiple choice test. They have to know how to study for that much information. So I think it’s really important.”

Some students agree with this assertion. Perhaps with all its stress and negative effects, for many students, finals ensure that they are equipped for future enterprises that may not be as lenient as ETHS.

“Personally, I think finals can be helpful in some areas, especially for getting ready for college. In college, you have finals. Taking finals in high school can be a lot of help, so you can get practicing and stuff like that.” agrees Meyer.

Other students disagree, expressing that not everybody will be looking to go to college after graduation. There are many paths other than going to a four-year college, and many of those paths have no need for finals.

“A lot of teachers argue [finals] prepare you for college. I’m all for being prepared for college, but I think that we have a lot of stress now about other things,” Kaplan remarks. “There are a lot of opportunities to prepare for college in other ways, like taking AP classes, for example. And not everybody is college bound, so I don’t think it’s necessarily worth everybody taking all these tests just for [the skill] not to be used later.

“If a student is planning on going to college and is expecting to take finals, the practice definitely could be beneficial. But I also think that a lot of people go into college with all different kinds of experiences, and you’re going to have to study and work hard for finals in college, regardless [of] whether or not you’ve taken them before.”

There are many other alternatives to exams, such as student-written projects, research papers, student-written tests, lower stakes cumulative exams with retakes, or even giving lower-weighted quizzes throughout the semester.

“I do feel like it’s a lot of stress for one week trying to remember so much from all of your classes, and just everything that you did throughout the year. Maybe if there’s a way to go over the material, but it wouldn’t affect your grade in the same way and it could just be something where you can practice and revisit things, that would be much more beneficial and less stressful to students,” Meyer expresses.

“For all we know, maybe in a couple years, colleges are going to phase out finals, the same way that they’re phasing out mandatory ACT or SATs,” Kaplan comments. “We’re changing our view as a society on standardized testing.”