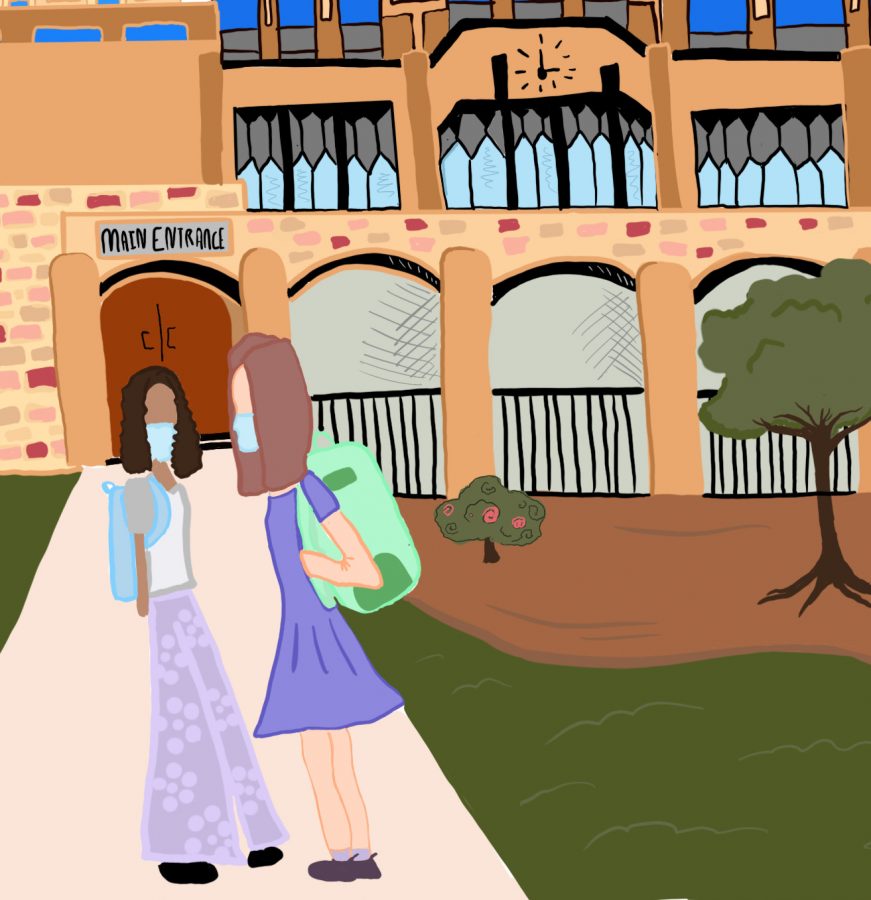 The bell rings, echoing across the ETHS building. Students stream in and out of doors, rooms and hallways finding their way to their next class. The block schedule is now fully in place, finals have been cut from the program and students are finally able to interact without clicking an unmute button. It’s fall at ETHS once again.

It’s an emotional time for everybody, whether that be a good thing or a bad thing. Many things are changing in a short amount of time.

With feelings running at full speed, ETHS staff, students and teachers look to the following year of school in-person with stomach-churning apprehension and excitement.

Principal Marcus Campbell was a big part of proposing the changes to in-person school that will be adopted at the beginning of the school year. Along with more safety precautions, many new things will be fully established—primarily, the removal of finals and the implementation of a block schedule containing longer, but fewer, classes per day.

According to Campbell, the block schedule will likely have a huge impact on the education of ETHS students as well as their experience socially.

“I think the block [schedule] is going to slow down our day… Teachers are going to be able to go deeper in the content,” Campbell says. “We’ll have 10-minute passing periods. Everybody can take a breather, take care of their needs, go to the next class.”

Campbell views the block schedule as an opportunity to “rehumanize” the school. He considers student’s health—mental and physical—to be of the utmost importance.

“For many kids, schools have been dehumanizing places. Part of block… is about rehumanizing the space…and focus[ing] on being back together, and teaching and learning,” Campbell explains thoughtfully.

He adds that the presentation of work may change too, taking into account the lack of finals in the coming year. “There’ll be more project-based learning, for sure,” Campbell says.

Finals were a cause of stress for students, teachers, and administrators alike. Getting rid of final exams is a radical decision but is aimed at making the school experience more humane.

These two pillars of change are good enough on their own but work together wonderfully.

“Instead of having a week of exams, anytime a teacher wants to give a multi-unit exam, a multi-unit test over 85 minutes, they can do that,” Campbell says.

“After doing online school for so long, I got really comfortable being home,” junior Alice Lavan said. “I think all the [understandable] allowances we made for ourselves definitely changed the way I performed in my classes. And the combination of that with the lack of social aspects [online] made it even harder. You weren’t seeing many faces or hearing many voices, which made it harder to put that effort in.”

“I think for a lot of people, it might be a rough transition, given the adjustments we made at home. [It’s a big change] to then be in person and need to hold yourself accountable.”

Leah Johnson is going into her junior year at ETHS. After trudging through 10th grade, she is looking forward to being able to learn in-person in the coming year. Her sophomore year was pretty rocky, positive as a whole but lined with frustration over the mediocrity of e-learning.

“I don’t think sophomore year laid the best foundation for junior year,” Johnson states.  In the last two years, online school has deprived students of having a full and preparative learning experience.

Junior year is widely acknowledged as the hardest year of high school, complete with a fresh load of AP and honors classes, taking the SATs and ACTs and beginning to leave behind your childhood to make difficult choices about your future.

But for Johnson, putting aside the deficiency of the ‘20-’21 school year, next year is looking up.

“I’m excited. I’m taking classes that I asked to do work in, my harder classes I chose to take. I don’t think I’ve set myself up to fail,” Johnson says.

Senior Maeve Smith views next year a little differently. The class of 2022 could easily be considered the only current class comfortably familiar with ETHS. They’ve had over a year and a half in the building to get used to its operation.

“I don’t think [in-person school] will affect me very much. It’s not going to be too different from my freshman and sophomore year, when I was [in-school],” Smith says.

However, Smith agrees that the shift to in-person school will be a struggle for the younger students.

“[Especially for underclassmen], the building can be a stressful place,” she says. “Our homes, most of the time, are safe spaces.”

The elimination of finals is a blessing in Smith’s mind. After taking the SATs in a COVID-19 environment and having to get through the most difficult year of her high school education, finals were just another anxiety to add to the list.

“[Junior year] was definitely the most difficult year, especially because of the pandemic, so the elimination of finals is a huge weight lifted off my shoulders,” she says. “School is very stressful for me, and [not] having to worry about finals is a huge stress reliever.”

It’s been a while since the ETHS population was fully in the school at the same time. The 2021-2022 school year is going to have its challenges, no doubt. The school is turning classical education on its head, making a number of big changes in a short amount of time, but those changes are all made in the name of honoring students’ humanity.

It’s fall at ETHS once again.