From one circus family to another 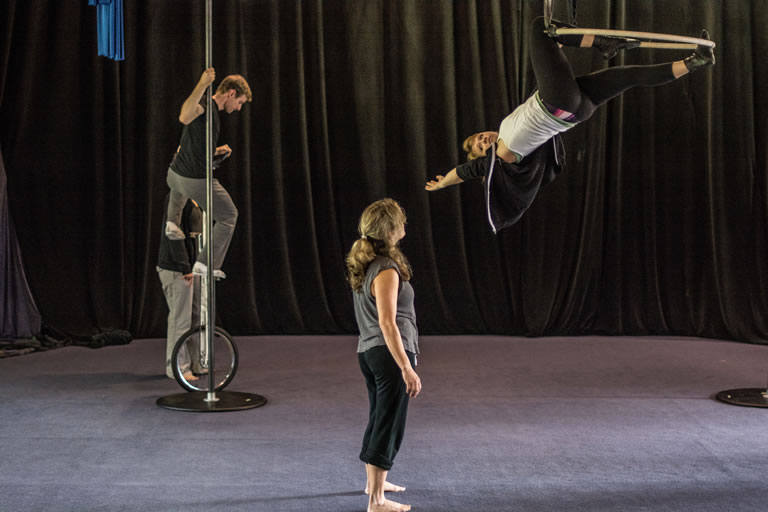 The Actors Gymnasium was founded in 1995, and it has since become a nationally recognized performing arts center and a staple of the Evanston community.

I watch as Sylvia Hernandez-DiStasi stands at the front of her practice gym, staring with eager eyes up at the silks hanging from the ceiling, where her students are rehearsing. The room is big, with a vaulted ceiling and blue mats to catch the artists after they fly through the air. Unicycles lay resting against the walls next to large colorful hoops. Hernandez-DiStasi looks right at home amongst all the colors and chaos. “Good job!” she yells up to the student, who is still suspended gracefully in the air. I look up, and, watching her, I can’t help but imagine Hernandez-DiStasi as a young girl, flying in the same position. But, instead, she’s in a huge circus tent, filled with an audience, and the sign Barnum and Bailey posted outside.

Hernandez-DiStasi grew up in a family of circus performers.

“My parents were in the circus when I was born. I have a picture of myself sitting in front of their circus tent at three months old. I was always a part of it,” Hernandez-DiStasi says.

Her father’s German, and her mother immigrated from Germany before joining the circus. Hernandez-DiStasi started performing and touring with Barnum and Bailey and The Ringling Brothers at the age of only seven. With her parents and three brothers, she toured from March until November every year and would then go to her hometown of Sarasota, Fl., until the next touring season. With no official schooling, this was her whole world.

“All of our friends were circus people; everyone I knew was in the circus. It’s interesting now, because I teach circus, and I have students who say they grew up in the circus, but it’s different,” Hernandez-DiStasi explains.

While on the road, Hernandez-DiStasi’s family traveled and lived out of a big white trailer, the words “Ringling Bros. and Barnum & Bailey” imprinted in big red letters on the side. Every night, they performed in a huge red circus tent. The audience, eager and loud, would pack inside, surrounding a large ring where the performers entertained. Nightly, the scent of buttered popcorn filled the room and joyful laughter of children rang. Right in the center of all the commotion, dressed in sparkly mini-skirts for the girls and bedazzled leggings for the boys, stood the Hernandez troupe ready to perform feats of danger and excitement.

Together, the family performed over 500 shows throughout Hernandez-DiStasi’s childhood. While touring, they lived in trailers and spent all their time immersed in the circus.

Growing up in the circus was a much different experience than that of a typical childhood. It meant work when other kids would be free to play.

“I didn’t really like to practice; I had to practice a lot. I was inside my friend’s trailer, and I heard my dad calling me, and I was like, ‘Oh, no, I have to go practice!’ At the time, I was hiding in my friend’s trailer, but there was a big storm. Hernandez-DiStasi explains. “I looked out the window, and the circus tent had blown down. It was terrible. But I remember thinking, ‘Oh, good, now I don’t have to practice.’”

Hernandez-DiStasi was most famous for her family’s teeterboard act. To the sound of trumpets flaring, the family would run into the center of the ring dressed from head to toe in red and white sparkly clothes. She was at the center of it all, her high blonde ponytail bouncing and a smile spread across her face, stood eagerly at the bottom of what appeared to be a large seesaw like contraption, called a teeterboard. Behind her, five impressively strong men, standing stacked on top of one another, stood waiting for her act of bravery. On the other side of the teeterboard was a ladder as tall as the stacked men. On top of the ladder stood two other performers waiting to jump. Down they went, propelling Hernandez-DiStasi high into the air. She flew, flipping and then landing perfectly on top of the highest stacked man. The audience erupted in applause and celebration at this mighty feat, begging for more. The Hernandez family performed this act around the country with the Ringling Brothers. Recently, in 2019, they were inducted into the Circus Ring of Fame, in their hometown of Sarasota, for this very act.

Feeling stuck and wanting to do and learn more, Hernandez-DiStasi left the only life she knew behind, because it felt like the only way to completely escape. And, so, in 1990, she moved from her family and the circus and ran away with a clown.

“I didn’t want to be in the circus anymore. I was always the circus girl,” Hernandez-DiStasi reflects.

As a quiet young woman, she ventured to Chicago, where she bought a condo and began working in restaurants trying to find her way. It wasn’t until her waiter friend introduced her to a theater director that she was able to find her new calling. He was looking for someone to help teach his actors circus tricks to incorporate into his play. Hernandez-DiStasi was perfect for the job. She was then introduced to Lookingglass Theatre, a theatre company located in downtown Chicago, founded by actor David Schwimmer. She continued to do the same work there, training actors in the art of circus.

“It reminded me of the community and environment of the circus, working together and taking care of each other,” she says.

In 1995, after a while of working at Lookingglass, someone told Hernandez-DiStasi about some studio spaces for rent in Evanston. Immediately, she was intrigued. It would be a great opportunity to start her own school and be able to continue to teach circus. Pooling her money with some friends, Hernandez-DiStasi and her new business partners started what is now known as the Actors Gymnasium.

“It was so weird, because you grow up working with people you know really well. And, now, it was four strangers who barely knew each other. But it felt just meant to be. I didn’t stress too much. What’s meant to be is going to be,” Hernandez-DiStasi explains.

The Actors Gymnasium, located in Evanston, has since become one of the nation’s premier circus and performing arts training centers with Hernandez-DiStasi as the co-founder, artistic director and master teacher. There, she teaches classes to children age seven and all the way up to adults training for Cirque Du Soleil.

“I love that I made a place where people can feel good and have a place to go and feel normal. I think my world is very small. The world itself is so big, but all I can do is affect the people in the closest of my circle. I have seen a lot of people in my circle go and affect the bigger circle. The kids that have come through the Actors Gymnasium and have gone on to do greater things; I can take a little pride in being able to give them space to come through for a little while,” she says.

One of her students, senior Sadie Sims, has been a student at the Actors Gymnasium for twelve years

“I’ve seen her impact people constantly. She has been a person in my life that has pushed me. In fourth grade, I would say she was my role model. She has that effect on a ton of kids,” Sims explains.

. Trained by Hernandez-DiStasi, she’s now part of the teen ensemble and has performed in many shows. At the Gym, she’s known for her bravery and enthusiasm.

“I’ve never been super afraid, which I think is why Sylvia would put me in these large stunts ever since I was a really little kid,” Sims says.

Growing up at the Actors Gym, Sadie has spent years training with Hernandez-DiStasi.

“She’s fully tough love—she’s going to push you, especially if she sees potential. She wants you to do better. It makes sense that that’s the way she teaches; that’s probably the way she grew up. She was a little girl helping her family. It’s all tough love.” Sims explains. “She doesn’t put up with a lot of crap, but, at the same time, she doesn’t want to fall into a pattern of pushing kids too hard and pushing them out of the circus.”

Thirty years after leaving the touring life of the circus, Hernandez-DiStasi teaches at the Actors Gymnasium and spends time with her son, Griffin, who’s in college but grew up performing with the Actors Gymnasium. Now, she’s helping to begin others’ circus journeys while also coming full circle on her own.

“Circus isn’t a thing you do; it’s more of a lifestyle. I’ve been doing it for a long time. I left because I thought I had never done anything else. But it didn’t take long to realize that it’s not something you can leave. It gets into you” Hernandez-DiStasi explains. “ It’s not just something you do. It becomes a passion. It’s an eclectic group of people who are looking for some place to belong. My son said, ‘It’s a place for everyone to be together when you don’t belong.’ ‘It’s not about performing or competing. It’s unique.’”