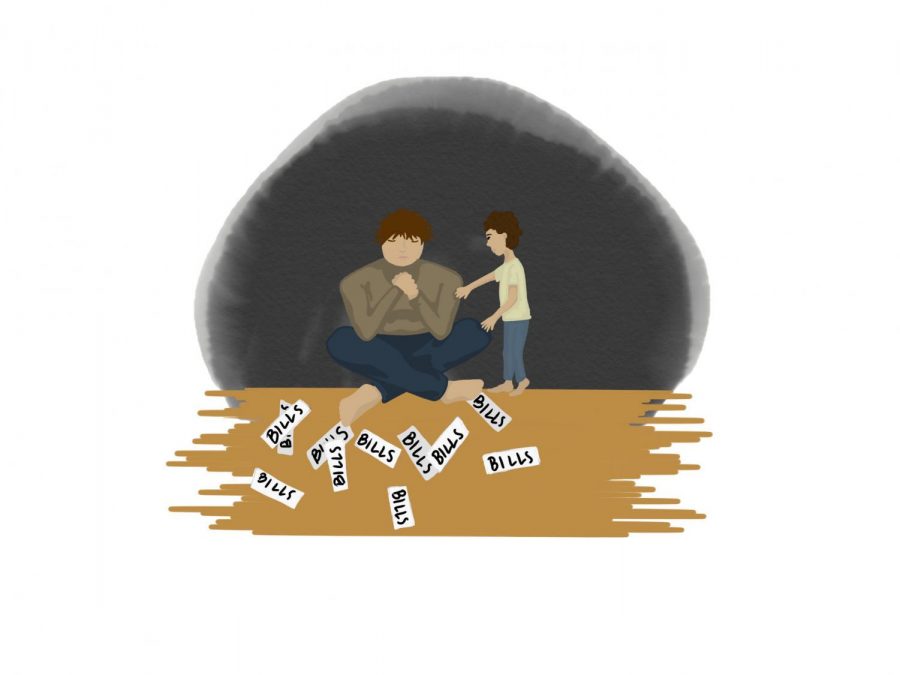 *Leah is a fictional name created for anonymity.

On March 17, 2020, every student in ETHS stopped attending in-person classes and went through a dramatic shift to online learning, or e-learning. That enormous building at 1600 Dodge Avenue was completely deserted by the beginning of April. This shift happened across the U.S., leaving many families locked at home confused and doubtful of what the future would hold. My family was one of them.

Thirteen months ago, China reported the existence of COVID-19 on Dec. 31, 2019. It has been ten months since the World Health Organization (WHO) declared COVID-19 a pandemic.

Despite the U.S. government’s constant assurance that the country would soon go back to normal, with enthusiastic remarks of “we’re in this together” and “this too shall pass,” most families are still at home—and, often, in trouble financially.

Even though I faced financial instability, on this particular December morning, I went out in search of a Christmas gift. Old Orchard looked like a rainy desert when we arrived. I kept thinking about how unfortunate it was to have been born into a low-income family. You’d have to think twice before you buy that red turtleneck for Christmas and let’s not mention if the turtleneck is a designer one. For that, you might as well break the piggy bank. Yet, there we were, looking for a Christmas present to buy for the person who birthed me.

It has been a while since I had hung out with Leah,* and the weather just had to be a lovely pairing of rain and wind. We spent hours walking in and out of stores, thinking about what I could buy with $200 on my card. I felt awful having to decide what gift was cheaper, but luxurious. Ugh, I remember thinking, I wish I had a job.

Since the pandemic started, people across the United States lost their jobs, family members and friends due to COVID-19. This has been a constant reality for people in lower-income communities. This, too, has been my reality.

According to Data USA the three largest ethnic groups in Evanston are white (59.4 percent), Black/African-American (16.2 percent) and Asian (9.18 percent). Among the ethnic groups in Evanston, the three ethnic groups living in or below the poverty line are white with 5,010 people, Black/African-American with 1,939 people and Hispanic with 1,600 people. These groups add up to 13 percent of the Evanston population.
Data USA also stated that unemployment insurance claims rose in April 2020 with the claims reaching their highest point at 202,000. In that same report, Illinois has the third-largest number of unemployment claims, coming right after California and New York. The new cases of COVID-19 correlated with weekly unemployment claims in Illinois for much of 2020.

Since the start of the school year, I’ve interviewed friends that I know who have been struggling in some way or another financially due to COVID-19. And, during the reporting process, I’ve racked my head over and over with the idea that I can’t tell everyone’s story. All of us have gone through different hurdles because of the pandemic, and it would be unjust and hypocritical of me to tell you that these stories represent all of ETHS students’ struggles due to COVID-19. But I can share my own.

I am an only child and live with my mom, who has been both my mother and father simultaneously. Since her job relies on International students attending Northwestern, she has not been working since March 17 of last year. We have depended on unemployment benefits since the start of the pandemic.

In the summer, there were citizens and government officials who believed that the $600 a week in unemployment benefits for unemployed workers should not be extended or should be cut in half, because, as they believed, these workers were clearly “free-riders” who should instead go back to work.

During these past months, I have witnessed the lack of responsibility from our government as well as from corporations such as FLIK Hospitality Group, which is in charge of James L Allen Center, where my mom works, a lack of responsibility that flies in the face of most people’s ideas about what a free-rider is.

A free-rider is a person or group of people who want “others to pay for a public good but plans to use the good themselves”. If an unemployed worker is considered to be a “free-rider” because they are using their unemployment benefits, this would mean that they aren’t paying for the benefits—the money—they receive. However, unemployment benefit funds come from paying into unemployment, and what you receive is based on what you were making before going on unemployment.

Now how does this connect to students and their families in ETHS?

A gift is “a thing given willingly to someone without payment.” That is what I was looking for on that depressing day. I wanted something that would show how much I love my mom despite my lack of a job or a place that constantly pays me for my work.

My beautiful check of $200 came from the 16 hours of volunteer work at the Election polls in Oakton Elementary School on Nov. 3. I volunteered with two ideas in mind: serve the community at such a crucial moment in history and get paid $200 that I would use to buy my mom a gift.

I wanted to remind her that no matter how difficult our financial situation may be, we could still get through it. I also wanted to make her feel loved and remembered; that was the purpose of a luxurious gift. There’s a science behind it.

Leah, who helped me choose a gift for my mom, lives with her dad, mom and older sister in a two-bedroom apartment. Her dad works two jobs every day except Saturday. He sometimes undertakes side jobs with Leah’s older brother, such as painting houses or fixing the roof.

“Do you think your dad gets tired or stressed out because he works so much?”

Leah’s older sister also works two jobs, not including the delivery of Amazon packages she takes on periodically. And her mom? Her mom underwent surgery on her wrist and has stopped working for about a year.

During the beginning of quarantine, in May, Leah’s mom and dad tested positive for COVID-19. The whole family had to be in quarantine for two weeks in different rooms; no one left the house or was near Leah’s mom or dad.

During that time, I had received alarming voice messages from Leah.

Leah’s mom had carpal tunnel syndrome on both her wrists; that’s why she received surgery. She was in a vulnerable state which had worried Leah to the point of crying and thinking that this might be how she’d lose her mom to COVID-19.

Leah’s older brother would leave groceries and other necessities outside their door so as not to have any sort of contact with his family.

This has been a frequent occurrence among families around the United States. This says plenty about our government who has left us with a vicious cycle of COVID-19 cases rising, lowering and rising again.

“While I do acknowledge that my father was at an advantage in keeping both of his jobs. I will also point out that the government did not do a fair job in supporting the US population,” Leah wrote in a response to me back in December. “This isn’t the first time the human race has gone through a pandemic that required extreme and urgent care.

There’s been the influenza pandemic, the Bubonic Plague, the Spanish Flu, etc.”

Leah also wrote, “It is very much evident that history repeats itself. When we ask ourselves if the government could have done a better job in caring for the people, the answer is yes. The truth is, the government knew that, sooner or later, we would have yet another illness. The government might not have known it would be specifically COVID-19, but, if history has taught us that diseases are repetitive and similar to each other, why weren’t we (as a country) prepared for the next outbreak? Before COVID-19, the government should have bought supplies—such as masks, gloves, tissues, etc.—in large quantities to provide for the people. This should have been done beforehand, but they didn’t. Why, you might ask? The reason being is very simple. Money. The government would need to hire a group of people to maintain the supplies sanitized and in good shape over the years until we had our next outbreak. One might argue that the government would not be able to do this because of X, Y and Z. But the reality is that we do this all the time. The tyrannical government does this with weapons. They build and maintain these weapons just in case of a war, we would be prepared. So, then, the real question is this, “Does our government care for the people?” Short answer: No.”

When a parent has to work multiple jobs to feed their families, they’re most likely not going to stay home amidst a pandemic. That’s why Leah’s father is still waking up at four in the morning and coming home at three in the morning.

My mom, now 48 years old with back pains and severe anxiety is tirelessly looking for jobs that can pay her enough to feed us and maintain a roof over our heads. For those who criticize wage workers such as my mom, she is the embodiment of years of strenuous labor, she embodies the thousands upon thousands of people who are just trying to do right by their families.