Students take to the polls in more ways than one 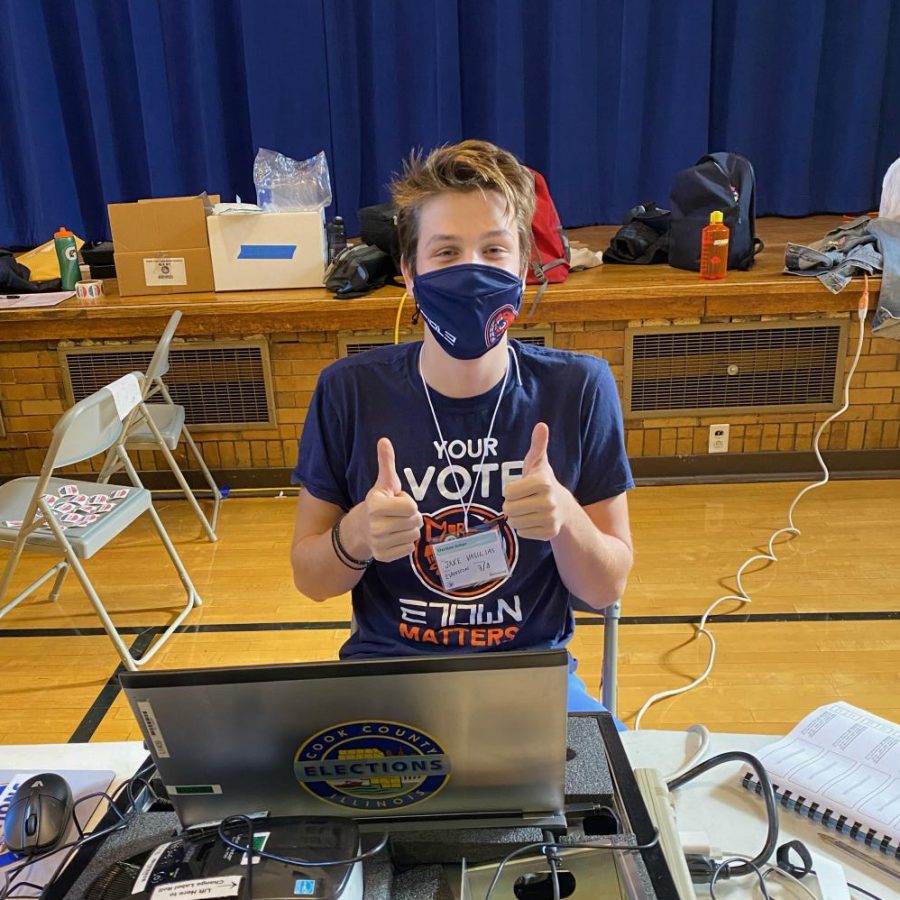 Elections don’t simply happen. Behind the scenes, there are people working to make sure everything runs smoothly. As we’ve seen this year, making sure that every vote is counted can take time. With an increase in mail- in voting, allegations of voter fraud and the ever-present threat of COVID-19, the 2020 election has been one of the most contentious ones yet. To make sure Evanston’s election ran successfully, countless students stepped up and taken the role of election judges or poll workers.

For senior Alex Johnson, preserving the integrity of the election was a crucial reason he applied to become a poll worker, and even though he wasn’t assigned to a polling place, he believes that poll workers are essential to preserving American democracy.

“Especially when there’s this idea that there is fraud in the elections or that it’s un- safe, I think that it’s really important to do as much as you can to make sure that elections run smoothly,” Johnson says.“I just thought that it would be a good way to help out in the election, not even in a partisan way but just to support the voting process.”

Senior and polling technician Oliver Leopold explained on the election day Kit Chat (The Evanstonian’s podcast) that even though only one voter came to his polling station, making sure that person had an opportunity to share their voice was worth their efforts.

One cause of voter-fraud claims has been minor errors in the polling process, most of which have been corrected. For example, according to BBC, a typo when entering ballot data in Michigan circulated on Twitter as evidence of voter fraud. Sophomore Emily Felts was an election judge and says these mistakes are more common than you might think. In fact, they even happen during our own local elections. “My computer had an error message,” Felts says. “Towards the end of the night, no one knew what it was, it wasn’t in the manual book that they gave us, and we even called the county problem-hotline. We had a bunch of other weird problems, but they were all solved pretty easily, the keycard scanner on one computer wasn’t working, and one computer kept jumping on and off the WiFi.”

Election judges are trained to deal with these problems and are provided with resources to help them with any unforeseen circumstances. In a normal year, anyone who applied to become a first-time election judge, even if they didn’t end up with a precinct assignment, would have to attend classes to learn the in’s and out’s of the process. Due to COVID-19, the training took place completely online.

“It was an online course, and full of watching videos and reading short lessons and then taking a test. It’s really in-depth, and it pretty much walks you through the process of what you do, from the night before, to the election, to the end of the election and the end of the day.” Johnson says. There are also a number of assessments dispersed throughout the training, to make sure that all election judges are fully qualified and understand the proper procedures.

Another reason more students have decided to become election judges is to protect the elderly. According to the U.S Election Assistance Committee, 58 percent of all poll workers in 2018 were 61 and older, a group classified as high risk for COVID-19. This year, there have been fewer people signing up to be poll workers nationwide. According to Injustice Watch, in mid-September, Chicago only had half as many applications as positions that needed filling. Because of this shortage, young people have stepped up.

“I think younger people will be more safe if they’re able to go out and be poll workers. I did feel like I had some responsibility, as someone who’s healthy and able, to go out and fill these positions,” Johnson says.

Junior Peyton Benz agrees on the importance of poll workers.

“It’s not the most fun job ever, but it is essential,” Benz says. “I think anyone who’s voted before can tell you that they are an essential part of the process. It’s really important, especially with COVID-19, to be a poll worker if you’re relatively healthy.”