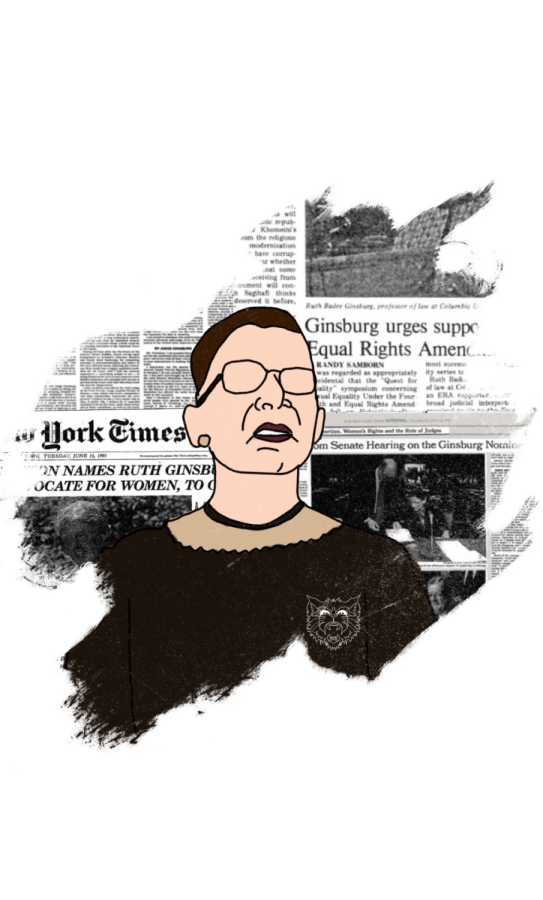 On Sept. 18, the whole country learned of the passing of 87-year-old Supreme Court Justice, Ruth Bader Ginsburg (RBG) from complications due to pancreatic cancer. Millions were left overwhelmed and shocked; some of whom honored her with the words “rest in power.” They reflected with gratitude and admiration for the way she leveraged her position both on the Supreme Court and throughout her life. In the 50 plus years of her career, she advocated on issues such as abortion, equal pay and same-sex marriage. The loss of her progressive ideologies on the Supreme Court makes the appointment of a new justice even more pivotal.

“I think that before she died, she was the last hope,” sophomore Natalie Svolos says.

“My most fervent wish is that I will not be replaced until a new president is installed,” Ginsburg confided to her granddaughter prior to her death.

Currently, it appears that her wish is unlikely to be fulfilled. With the upcoming election, both Democrats and Republicans are pushing for what they believe is most beneficial for their party. President Donald Trump has already nominated Amy Coney Barrett, a circuit judge on the U.S. Court of Appeals for the Seventh Circuit, but she has not yet been confirmed by the Senate.

In 2016, the government was in a similar position when Supreme Court Justice Antonin Scalia died. President Barack Obama tried to appoint Merrick Garland, but a Republican majority Senate refused to hold a hearing and ruled they should wait until the election so Americans could have a more direct say in appointing judges to the highest court.

This year, Democrats argue in favor of the same decision, as the election could result in a Democratic president and a left-leaning justice could take Bader Ginsburg’s place. If Trump succeeded in filling this space before the election is decided, it would be much easier for him to institute laws aligning with his party.

“Amy Coney Barrett, in my opinion, is anti-woman for her opposition to the right to choose and anti-human rights due to her opinions on equal and affordable access to healthcare,” senior Lara-Nour Walton says.

Some people believe that confirming Coney Barrett will threaten the laws that Ginsburg helped put into place and make it harder for underprivileged people to receive justice.

Whether another justice fills her seat before the election is decided, Ruth Bader Ginsburg’s legacy lives on through American youth and everyone she inspired.

Many ETHS students and staff believe her strong will and tenacity is reflected in young- er female politicians and paved the way for future activists.

“They’re incredibly similar… in terms of their confidence and belief [in] fundamental human rights,” history teacher DeAnna Duffy says, comparing Congresswoman Alexandria Ocasio-Cortez (AOC) and Ruth Bader Gins- burg. “RBG always had these ideas of ‘this is not a political thing; this is a human right,’ and AOC [does] as well. They’re ahead of their time.”

At age 29, AOC became the youngest woman to serve in the House of Representatives, and she is known for her extremely progressive ideals. A notable moment was when she confronted Representative Ted Yoho after he used derogatory words and insulted her on the steps of the Capitol. But, AOC is not the only woman confronting men in power.

“[When I was] watching the vice presidential debate, it was empowering to watch her [Harris] getting control of the situation,” sophomore Alicia Frajman says.

Harris held her own at the vice presidential debate. Known for her bemused looks towards Vice President Pence and for saying “I’m speaking,” Harris demonstrated that she would not be spoken over.

Historically, people of color, especially women, have been underrepresented in politics and the media in general. To many young females, it’s inspirational to see women of all races finally be able to speak their truth because of the work that RBG and feminists like her have done. Some have begun to implement and continue to spread their words and actions in the world.

Those who are legal adults can more directly support the values of these politicians in the general election that is coming up.

“In terms of how the future will look,” Duffy says, “I’m waiting to see who gets elected and what their actions will be. It’s so hard to tell at this point.”

Though it may seem like students don’t have a voice, anything helps. Svolos, for example, owns a Redbubble shop and sells products with the artwork of these politicians and their quotes.

As RBG once said: “Real and enduring change happens one step at a time.”