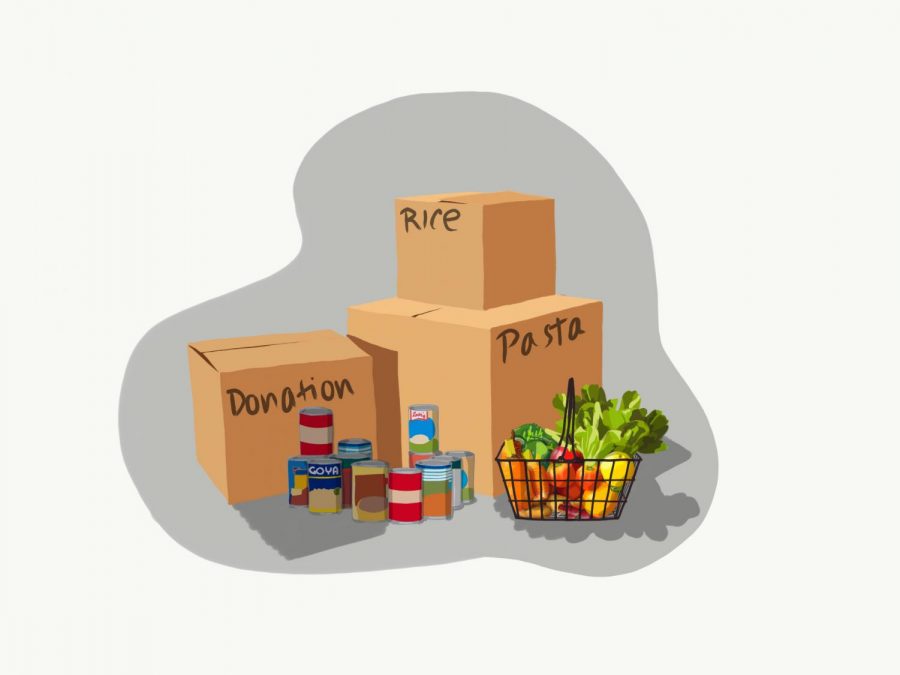 The lockdown posed a unique question for ETHS’ nutritional staff: how could they feed the thousands of students who get their lunches from school when no one was allowed into the building?

“We were flying by the seat of our pants, just like everyone [else],” says Kimberly Minestra, ETHS Director of Nutrition Services.

Changes had to be made to the processes of meal preparation and distribution to prevent the spread of the coronavirus.

Even without a global pandemic, it is crucial that food is always kept sanitary for the health of anyone who consumes it. Lunchroom workers already have to wear gloves and hairnets when handling food, so most of the new precautions put in place were focused on keeping workers safe.

“We only have four people working together at a time. We take all the precautionary measures in regard to sanitizing daily. Our distributors have done the same. We’re so used to doing that anyway, it’s not too different, I suppose.” Minestra says. “But with masks, and not keeping many staff in certain areas all the time is something that’s different. Also, we put up plexiglass throughout the kitchen, in areas where people might be working closer together, so we can separate them a little bit more that way.”

Nutritional services rose to the challenge, and they were able to make sure all ETHS students had access to food during this time of crisis.

“Starting in the spring, we did weekly meals. It was a bag of meals that was five breakfasts and five lunches that you could pick up every Monday,” Minestra says.

They have continued to provide two meals a day for students in need and have been able to distribute them across a wide variety of locations in order to make them more easily accessible to families all over Evanston.

By incorporating variety into the meals they provided and including some basic prep that students could do on their own, the nutrition services team worked to combat the boredom caused by quarantine, even if it’s marginal

“There’s a two-week menu cycle. Basically, it just switches over every two weeks, so five different kinds of breakfast things a day, five different lunch things a day. We’ve provided cooking directions with that. We try to make it convenient and not too boring. Something that the kids would still like,” Minestra says.

ETHS students’ anonymous responses to a survey confirmed that the meal preparations were easy, and the food overall was very helpful to them.

One of the challenges nutrition services faced at the beginning of quarantine, and again now that school is starting up, is figuring out how much food to order and make. Because they could no longer rely on a consistent amount of students being in the lunchroom to buy food, at first, there was no way of knowing how much they would need.

“It’s a total guessing game, for sure, and then it starts to like even itself out after a couple of weeks. We’re at that point right now where we’re just guessing.” Minestra says.

However, nutrition services have recently started using a website that students can pre-order on to get a more accurate picture of how much food they’ll need.

“When the school opened up officially, we started doing the site,” Minestra says. “We didn’t have a pre-order before. So that was nice to see, any idea.”

Now, thanks to a United States Department of Agriculture (USDA) waiver, ETHS can provide its meals completely free of charge to all people under the age of 18.

“It’ll be free to get for everyone, so we’re trying to get that word out that no matter what district you go to, no matter what grade you’re in, just as long as you’re under 18,” Minestra said. “Just say how many kids are in your [family], and, then, you just give them however many bags.”