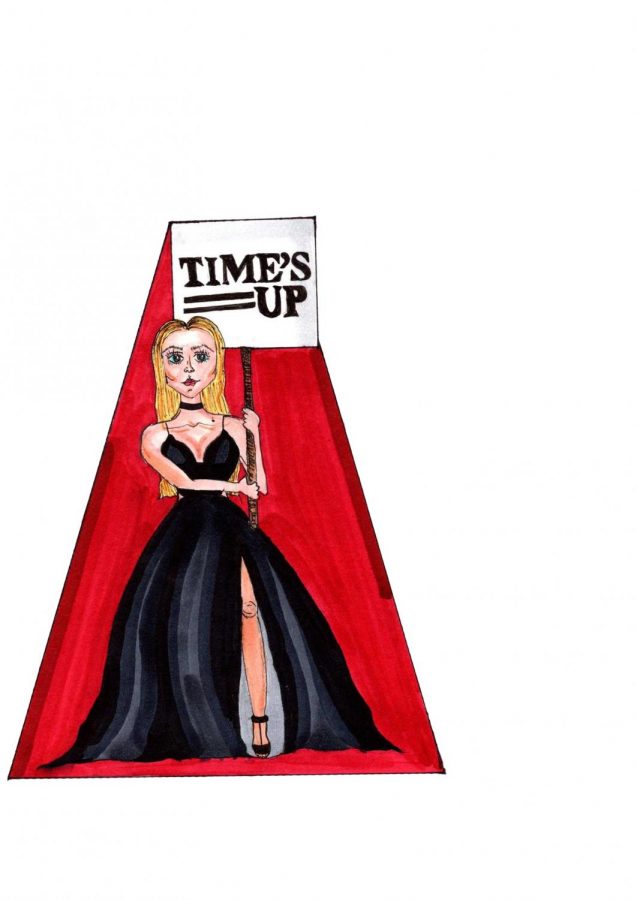 In the past decade, red carpet movements have served as a way for celebrities to elevate their voices and represent those who lack the ‘ability to speak out against sexual harassment. Arguably the most influential movement in that past few years has been the  #MeToo movement, which Tarana Burke started in 2006 to empower sexual assault victims, particulary women of color in low income communities, according to the #MeToo mission statement.

After about six months of the hashtag going viral, the conversation around sexual violence spread to reach a global audience of survivors willing to speak about their experiences and their allies. The movement’s organizers work with survivors in community events to establish empowerment.

Following the same outlines as #MeToo, #TimesUp is another organization that is focusing on empowering women who have survived sexual assault. Starting at the 2018 Oscars, many celebrities began wearing black  on the red carpet in support of the the #TimesUp movement which sparked a conversation surrounding sexual assault in celebrity culture.

In recent years, not only has the public eye caught on to sexism on the red carpet, but many celebrities have spoken out about how sexism affects them too. At the 2015 Grammys, Reese Witherspoon advocated for the #AskHerMore movement, which demanded media question women with as much thought and intents as men. The movement has taken off with many iconic figures behind the idea. With women like Reese Witherspoon, Shonda Rhimes, Gloria Steinem, Maria Shriver, Lisa Ling and Sandra Fluke, many people believe that the image of the red carpet is changing for the better.

“I think as a society we have shifted from a place where women are asked about fashion first to where women are asked about their lives and the things that they are doing or working with in the same way that men are, which I think is good,” says sophomore Ella Greenberg Winnick. “I think that that is a change we needed to see, and it’s still definitely one that we are waiting for completely, but it is moving in the right direction.”

The mission of the #TimesUp movement, similarly to the #MeToo movement, is to include all races, genders and ethnicities, which is something that has set #TimesUp apart from other red carpet movements that historically focused less on celebrity voice.

“We want every person — across race, ethnicity, religion, sexuality, gender identity and income level — to be safe on the job and have equal opportunity for economic success and security,”  the TimesUp mission statement says.

With its three goals of safety, equity and power, TimesUp is expanding its platform beyond the red carpet and to a world of people who are often silenced. The red carpet is continuing to shift into a place that includes all races and genders to support all voices.

“I definitely think that sharing that platform with black women and women of color is more important because you aren’t getting a one sided view, and I think race plays into it as well,” says junior Naiyah Bryant. “I think it’s important that [Times Up] continues to allow women of color to speak and include themselves in that conversation.”

In today’s world, celebrities are dominant figures in the media. Celebrities are using their platforms to promote products, stand for political beliefs and talk about their experiences. Movements including #MeToo have started on the red carpet because of celebrities’ recognition of their powerful platform. However, even with the support of fans from around the world, speaking out about traumatic events can be a daunting task.

“The majority of women – if they came forward – were stigmatised for reporting it, and in some cases lost their jobs,” says Reese Witherspoon in an interview with Anne Fulenwider.

“There was no reason to share your story if the results would be so punitive.”

Celebrities are helping survivors empower themselves by showing how strong any type of person can be, no matter what level of society they are in or what the “price” will be.

“Celebrities have a lot more attention on them,” says sophomore Ash Nelson.

“When they use their voices to talk about something important, there are millions of people following their decisions that can benefit from them addressing a larger issue.”

Corrected on February 28, 2020: The original version of this story incorrectly reported that Reese Witherspoon created the #AskHerMore movement at the 2015 Grammys. She advocated for the movement; she did not create it.