Euphoria exaggerates the misuse of drugs among American teenagers 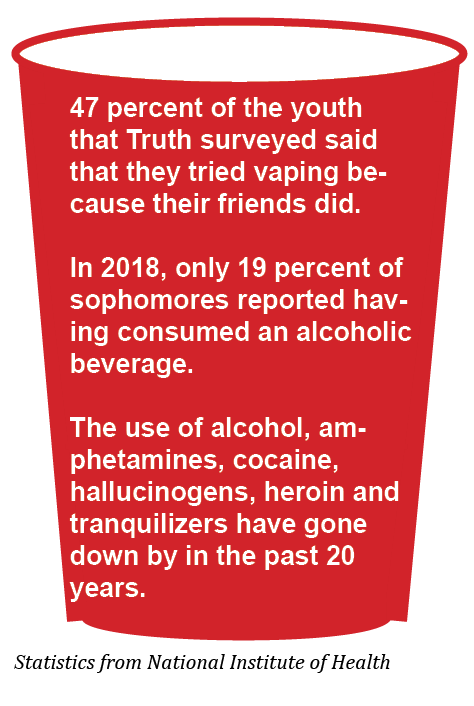 Following the life of 17-year-old drug addict Rue, recently released HBO drama series Euphoria graphically captures what teen drug use can look like in the United States. Some viewers argue that these scenes are too heavy, and take away from the show, while others say that these scenes truly depict teen life in America.

Although Euphoria focuses on more extreme drugs like fentanyl and heroin, the largest drug problem in Evanston and the North Shore is one that people tend to avoid focusing on: nicotine. Truth Initiative, America’s largest nonprofit public health organization, found that more than eight times as many 15- to 17-year-olds had tried Juul in October 2018 than in August 2017.

ETHS has addressed the issue of drug use on multiple levels, including the student athlete meetings, breathalyzers at school events, and by writing “Don’t let vape rule your life” on this year’s school issued planners.

“I think that our approach of informing students about drugs is one of the best approaches,” Wellness teacher Montell Wilburn says. “We don’t make decisions for students, but we understand that we will do everything in our power to empower students to make healthy decisions and hopefully they will continue to do that after they are outside of ETHS.”

However, this issue is not only relevant to Evanston residents.

According to Sarper Taskiran, a child and adolescent psychiatrist at the Child Mind Institute, the biggest problem with teens and drugs is that they are unaware of the health damages. Many teens try Juuling and nicotine but don’t understand the dangers of getting addicted.

“They [children and adolescents] really think that [Juuls] are mostly flavors and that they are inhaling a pleasant gas,” Taskiran says in an interview with Child Mind Institute.

47 percent of the youth that Truth surveyed said that they tried vaping because their friends did. Statistics like these show the effect that teenagers’ actions have on each other.

In Euphoria, almost all the characters struggle with some type of addiction, leading many to say that this makes the show seem unrealistic.

“I think it [Euphoria] really cast a new light on that kind of stuff [drug use],” says sophomore Lily Aaron.

Although Euphoria shows excessive drug usage, teen drug use has actually gone down substantially in the past 20 years.

According to “Key Findings on Adolescent Drug Use” published in 2018 by The National Institutes of Health there are fewer teenagers that smoke and drink than decades ago. The use of alcohol, amphetamines, cocaine, hallucinogens, heroin and tranquilizers have gone down by 20 percent in the past 20 years. Five percent of sophomores now report having used a hallucinogen in the last month, which is a third of the amount compared to the 80’s. In 2018, only 19 percent of sophomores reported having consumed an alcoholic beverage in the prior 30 days, down by more than 40 percent in the 90’s, according to the same NIH study.

“I think that Euphoria definitely intensifies the use of drugs in American high schools,” says Aaron. “I wouldn’t say that drug use is not prevalent but I definitely think it’s not as glorified as Euphoria presents it to be.”

Although these studies how that the use of nicotine is rising, the overall amount of other drugs in teenagers is actually decreasing.

One concept Euphoria does not exaggerate is the emotional effect of drugs. Aside from showing how drug use affects individuals’ lives, Euphoria also explores how a character’s addiction affects those who are close to them.

Multiple episodes of Euphoria explore the responsibilities that come with taking care of a loved one who suffers from addiction.

“After [Euphoria], I realized how much one choice can affect so many other people,” says sophomore Kate Suvari. “I think a lot of this show is about how [Rue’s] overdose affected so many people and that was just one decision. It definitely shows the impact of the things you do.”