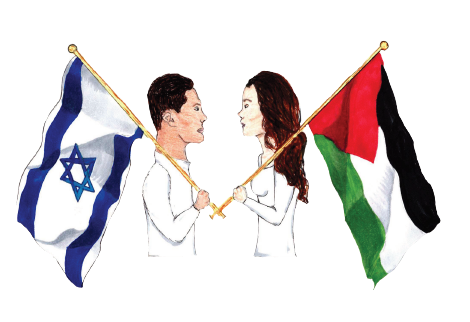 Judaism has played an integral role in my life and my family’s lives for nearly as long as I can remember. It started for me when I was just six years old, attending a public elementary school. Still too young to attend religious school, but yearning to learn what my older friends from synagogue were learning, I started to learn Hebrew. Day after day, I would sit at the desk in our guest bedroom, tediously following dotted lines that outlined Hebrew letters. After I finished a few pages, I would beg my dad to teach me words that I could repeat back to him. I would then open my workbook, make him spell the words slowly, and match them to the letters that I had outlined earlier with my shaky hand and dull pencil. To this day, I often think back fondly to those times. These early memories of forming my Jewish identity resonate with me on an extremely personal level. However, over time, these memories have become separated from my beliefs about Israel and Israeli politics.

Personally, I have struggled to craft a Jewish identity that I feel proud of, and ultimately deciding to separate that from my stance regarding Israeli politics was challenging. (I use the term “stance” rather than “opinion” because I have many opinions, and some conflict with others. The term “stance” more accurately depicts my eagerness to expand my knowledge). It has taken me a very long time to be able to articulate my feelings about these enigmas that have been surrounding me for my entire life, and I acknowledge the fact that I don’t know everything there is to know about this issue.

Oftentimes, a confusing word that often contributes to both identity and complexities around the Israeli/Palestinian conflict is the term “Zionism.” Zionism is most commonly recognized as a term used for a modern political ideology regarding the creation and upholding of Israel, or as many consider it, the Jewish homeland.

In 2014, differing opinions on Zionism and the conflict even resulted in a divide between the members of The Jewish Reconstructionist Congregation [JRC], a synagogue located on Dodge Avenue. According to the Chicago Tribune, this disagreement caused the rabbi at the time to resign, with articles about his resignation detailing that he felt his views on the conflict created too much contention among the members of the congregation.

“It was difficult for me personally to see my congregational home divided like that,” Carol Friedman, member of JRC, English teacher and co-sponsor of Israeli Culture Club explains. “It was a huge schism within our community. It’s really hard- this issue affects our identities as Jews.”

According to My Jewish Learning, a nonprofit media organization, the word Zionism was originally attributed to Nathan Burnbaum, who was an Austrian Jewish writer, but Theodor Herzl was the man responsible for turning Zionism into a political movement, and in turn trademarking the term. Theodor Herzl is often considered “Israel’s founding father,” because of his pamphlet titled Der Judenstaat [The Jewish State]. This pamphlet contained details of why Jews needed to establish their own state in order to maintain safety and to flee persecution and anti-Semitism throughout Europe and America. Herzl’s ideas did not come from nothing; he established his ideas over many years and as a response to some of his experiences with anti-Semitism and Jewish persecution in Eastern Europe.

Currently, in modern politics, there are often heated debates about whether the terms anti-Zionism and anti-Semitism are conflicting or synonymous. Certain Jews would say that the terms are synonymous; some believe that promoting and supporting Palestinian advocacy groups is silencing Jews’ right to self-determination, a right that Herzl believed so deeply in. Another common stance is that if Zionism is at the core of Jewish identity, then opposing Zionism is opposing Jewish survival, which is anti-Semitic. If Zionism is so inextricably linked to Jewish identity and growth, then anyone who actively opposes it is oppressing an entire group of people.

However, these heated debates don’t only take place among politicians.

“I find that recently the discussions about Israel-Palestine have been much more frequent, especially in the past year,” says junior Ilan Friedman. “It can be hard to separate the two at this point; you’re either a Jew for Israel or a Jew for Palestine.”

Although there are a range of views on these complex issues, there are also many Jews who believe that the terms anti-Zionism and anti-Semitism cannot be conflated. For Jews who do not support Zionist movements, having their views conflated with anti-Semitism can be upsetting. Oftentimes, those who do not support Zionism still actively support the practices of Judaism, the values it instills in young people, and the community it can provide for American Jews. Jews who choose to take an anti-Zionist stance often separate their dismay for Israel’s actions from their feelings for the Jewish people as a community. However, establishing this separation is not simple. In a world where Jewish culture is often overlooked by the political atrocities that take place in Israel, some Jews like myself find that it can be difficult to craft an identity that feels whole.

“[To me] anti-Semitism is different than anti-Zionism. You can be Jewish, have a full Jewish identity, accept Jews, but feel differently towards the state of Israel.” says junior Deena Goodgold.

Now, it is also crucial to understand that the conversations around Zionism are only a fraction of the larger conflict regarding Israel, and one that is primarily, but not exclusively, discussed among diaspora Jews. For both Israelis and Palestinians, the larger issue at hand is a conflict over pursuit of more land. Although this issue is very closely intertwined with Zionism and Israeli nationalism, the conflict brings up many ethical dilemmas regarding identity, activism, and politics for Jews around the world.

From my experience, separating my Jewish communities from my stance on a political dilemma has presented itself with personal conflicts about how legitimate my Jewish identity is. However, that doesn’t discourage me from looking to myself and those around me in search of ethical answers to my questions. Having made the distinction between politics and personal identity, I am able to acknowledge that Jewish identity is not always, or in some cases even partially, formed by views on Israeli politics.

“I would say that my identity as a Jew is formed by my family history. But I am deeply troubled, as many Jews are, by the ongoing persecution of the Palestinian people,” Carol Friedman says.

Additionally, many other factors influence how Americans identify their political views on Israel, regardless of religious identity. These factors include political identification and age.

According to a study conducted by Pew Research, Democrats increasingly sympathize more with Palestinians than Israelis. 40 percent of Liberal Democrats were reported to support Palestinians in 2016, while only 21 percent supported Palestinians two years prior in 2014.

Recently, many have taken to Twitter, using the hashtag #DisloyalToTrump. This followed a comment President Trump made about how Jews who vote for liberal candidates are disloyal to Israel because of the more common pro-Palestinian stance within the Democratic party. Trump’s usage of the word disloyal was used to describe what he viewed as a frayed connection to Israel, but many have reclaimed it over Twitter in attempts to justify their connection to Israel while also voting for Democratic candidates.

This trend is also visible today when looking at recent American Jewish activism. According to an article from Truthout.org, on September 7, 2019, liberal and progressive Jewish organizations organized marches all over the country to protest Immigrations and Customs Enforcement while using the mantra, “Never Again,” which stems from Holocaust Remembrance.

For me, I have found that opportunities like these often make me feel more connected to my Jewish identity than a debate about the Israel/Palestinian conflict would. To me, Judaism doesn’t have to mean Zionism, supporting a nation without questioning their moral decisions, or identifying in the same way as everyone around me. My Judaism is versatile. Judaism plays a crucial role in my life, and I don’t plan on changing that. I will continue to practice and celebrate Judaism in a way that works for me, even if that is not what I am surrounded with or told to do. I identify as Jewish, and that makes me feel connected to every person in the world who identifies the same way. It makes me feel connected to a larger entity, and a group of people that may not be able to agree on political issues, but still has a bond over shared history and collective experience.