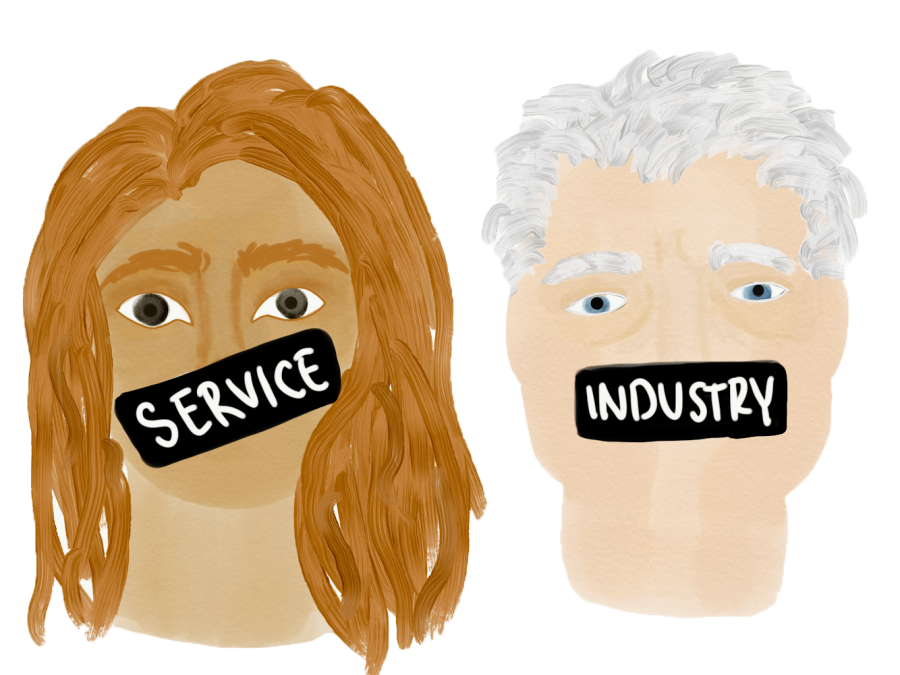 Senior Ariannej Cabrera worked at a local Evanston restaurant for two years. When she first started working there as a hostess, she wore nice clothes to match what she envisioned a hostess to look like: skirts, blouses and other professional attire.  Most of her coworkers were middle aged men; when these coworkers would make comments about her appearance, she felt uncomfortable, but she continued to do her job. After three or four months, another female worker came up to her.

“[She] told me ‘you have to stop wearing [skirts]. I’ve had people complain to me’ ‘I can hear people saying stuff about you’ and so I found out that a lot of the men who worked there were talking about me and what I was wearing. So I started wearing pants to work,” Cabrera says.

The Bureau of Labor Statistics finds that over three-quarters of teenage workers are employed in two major occupational categories: service and sales/office with 16-19 year olds making up one-fifth of all workers in food prep occupations.

A 2014 study conducted by The Restaurant Opportunities Center found that the dependency on tips only promotes a cycle of sexual harassment and assault, given that many employees are dependent on tips to earn a sufficient income. The common perception of the customer ‘always’ being right can often lead customers to mistreat workers. The survey also found that two thirds of female employees reported experiencing sexual teasing, jokes, remarks or questions from customers. Often going unnoticed or left unresolved, harassment from customers is more prevalent than from employers and coworkers of employees.

“People would come in and order their food, and ask for your number. Our manager was really great about making sure those people would leave,” junior Sylvi Imrem says.

Junior Rachel Lott, who works as a lifeguard, recalls, “We had to clear the water because our lightning radar was going off, as I was helping people exit the water, a middle-aged man with a young child by his side came up to me and kept telling me how great of a job I was doing. After pestering me, he asked for my number. It was incredibly uncomfortable.”

Sexual assault and harrassment also affects people differently based on race, gender expression and sexual orientation. According to End Rape on Campus, 80 percent of sexual assault is reported by white women, but women of color are more likely to be victims of sexual assault. 13 percent of black transgender people have experienced sexual violence in the workplace.

In many cases, the service industry has ways to encourage people to report sexual harassment and assault. Heather Behm, owner of Union Pizzeria says, “I feel as the owner it is important to make sure the staff understands that they are empowered and that we do not believe in the old adage: ‘The customer is always right.’ Their rights as individuals and deserving of respect, courtesy and dignity will always be of the utmost importance to me as their advocate, and I will always do my part to help prevent and protect them from being subjected to such treatment.”

An individual’s experience of harassment and assault can be harmful to their mental health and personal feelings of safety. The Institute for Women’s Policy Research states that “harassment can lead to depression; one study reported that one in ten women who experienced harassment had such severe symptoms that they met the definition of PTSD.”

“Where I work, it used to be really bad, like [the people who worked there] would grab girls’ butts and they only really hire female waitresses. It’s better now, but I don’t always feel super comfortable there,” junior Riley Smith* says.

The deeply negative effects of sexual harassment and assault in the workplace not only impacts an employee’s mental health, but also links to overall job performance. Individuals who experience it are likely to be fearful and anxious rather than comfortable and motivated as they should be in their workplace. The Journal of Applied Psychology notes that employees who experience sexual harassment or assault report decreased job satisfaction, job loss and dwindling relationships with coworkers.

“A couple personal experiences I’ve had was one of the male workers grabbing my butt, inappropriately touching my back, calling me sexy and other words along those lines,” senior Lucy Shapiro says. “I shouldn’t have to feel uncomfortable in my place of work. I shouldn’t have to change how I perform my job.”

Employees may even go to great lengths to avoid the perpetrator of their sexual harrassment, such as refraining from leadership positions or simply avoiding work as a whole. When employees experience sexual harassment at work, it takes a heavy toll on their mental health and personal welfare. Employers are necessary facilitators to build a safe, professional culture, especially for teen workers who may be entering workplaces for the first time.

“Sexual assault and harrassment is a mandatory training to set the foundation for knowing what behavior is acceptable versus unacceptable,” says Jeanette Hollingsworth, Aquatics manager and ARC coordinator at the McGaw YMCA. “As a manager, I try and have a relationship with each staff member so they can feel comfortable to talk about anything that happens.”

*Name has been changed at the request of the student and to protect the student’s privacy.