The complexity of having body cameras in school 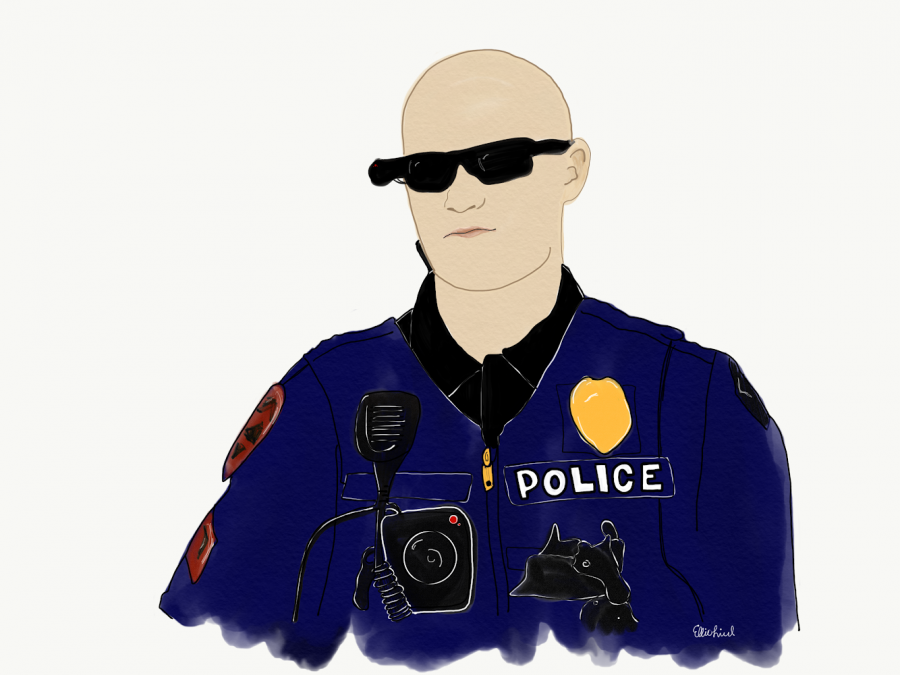 On February 25, Evanston aldermen voted on implementing a policy that could have many impacts on student life. This policy allows police officers in the school, otherwise known as student resource officers [SROs], to actively wear body cameras and even turn them on in situations where SROs feel necessary to do so. This policy was enacted to coordinate with a state law that mandates the use of body cameras across all police departments.

Throughout the voting process, school board members and aldermen believed that this policy would contribute to a safer school environment; however, it appears they overlooked a few details that could potentially harm students. One would be the language of the policy, which is extremely vague and does not explicitly state either why body cameras should be turned on or in what specific situations the body cameras should be activated. According to the policy, SROs should only activate body cameras if they “have reason to believe that a crime has been, or is in the process of being committed” or “is in a hostile situation or perceives that a complaint will be raised.”

“[The wording of this portion] is very vague, and it all depends on the SROs perception of what is a hostile situation, and I was not clear how that interacted with the first part about a crime being committed,” ETHS school board member Jonathan Baum says, the only school board member to vote against the policy. “I was concerned with having so much discretion with the SRO about when to turn on the camera and also since there is this discretion there is nobody to review that discretion. It is not clear about whether someone in the police department or administration can review that situation and decide when that is an appropriate time to do so.”

Based on the language of this portion, it appears that officers are able to turn cameras on or off whenever they deem necessary. This type of discretion can be problematic. If officers are only able to capture specific moments, the footage is an edited version of the actual events. When officers and students are engaging with one another, the perspective of both are necessary for an accurate record, especially if this event is to be under scrutiny by local authorities and media.

Even in recent Chicago history, the dangers of edited body camera footage have become more and more prevalent. In July 2018, protests erupted across Chicago’s South Side regarding the shooting of a beloved neighborhood barber. In an effort to become more transparent, the Chicago Police Department released the body camera footage from that night. However, the footage lacked sound and was edited, which obscured the officer’s responsibility to the wrongful death of Harith “Snoop” Augustus. . The footage that was released at the time was only 45 seconds long, yet it contained 19 seconds of the actual incident and a four second freeze frame showing Augustus had a weapon on him.

This type of story is one of the many examples in recent history of the complicated relationship across the police, the people they are in contact with and the cameras intended to keep officers more accountable. It is just impossible to be able to capture the entirety of a scene. This is  why it is problematic for a school to implement such a policy without more carefully considering the complexity of the issue. At ETHS, the goal is to try and create a school that is a safe space for students to come and learn in peace, but with this implementation, those goals may not be as easily achievable.

Almost all police officers wear body cameras when they are on parole, but many do not wear them on school premises. Given that schools are a safe place for many students, having officers with cameras in the building can lead to varying degrees of discomfort among students. This may even lead to breaches of privacy, making students feel uneasy knowing that officers can record them without their knowledge.

“I’m skeptical in the fact that filming it can get the whole picture of what happened and I think it can give people a false sense of confidence that this is the actual record of what happened,” Baum says.

This false sense of confidence is tied to having only one specific version of a scenario being captured. Officers are able to turn their cameras on or off at any moment, which can create one version of an occurrence that can impact the way the general public sees a scenario. While these recordings do have audio, this does not automatically confirm that what is heard is what occurred. Since nobody knows what is running through people’s minds during the occurrence, it is unfair to judge either person just based on a recording that may not capture  the whole story.

While the implementation of body cameras may not tell the whole story on an occurrence, it can provide a better sense of transparency among officers and students so officers can be held accountable, especially in situations where people may be targeted due to discriminatory biases.

“I think that having police officers wear body cameras in the school would increase transparency and hold police officers accountable when needed, which would be a good thing,” senior Elena Morales-Grahl says. “I do also think that there should be stricter guidelines on when these cameras can be turned on because from what I understand, the discretion is completely left to the police officer. I also worry about who will have access to the camera footage and how it will be kept secure.”

The main reason SROs are now mandated to wear body cameras is to be able to get a fuller perspective of a given situation. While the intention behind this policy may be for the benefit of the public the regulations placed appear to be poorly planned. According to Baum, the contract for SROs  with body cameras is five years long–meaning that if this causes problems within the student body and the community, there would still be an obligation to use them until the contract has ended.

In addition, many students were unaware of the implementation at the time and were not given proper information; therefore,  students were not given opportunities to speak on an issue that is largely affecting students, and in turn can have many unexpected impact on them.

“While I think it may make students feel uncomfortable being filmed, safety wise I think it can help monitor suspicious activities that occur within the school, ” Michael Burrell says.

Having SROs wear body cameras creates a complex situation for students and staff. Overall, this policy creates a unique situation because of the several ways that cameras can be implemented and understood among officers, staff, and students. It is imperative that this works as intended in order to ensure the safety of students and faculty at ETHS; however, with the regulations set in place through the wording and interpretation of the policy, the implications may be different.