The Rise of Social Media Activism 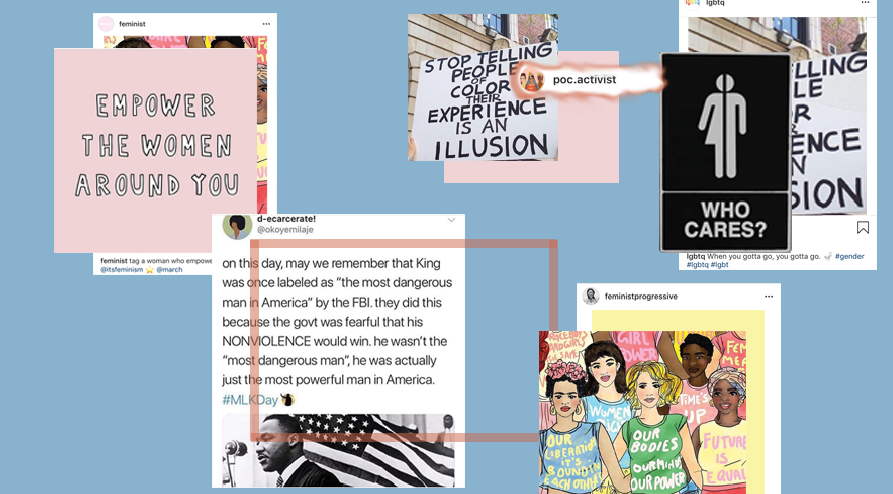 If you find yourself scrolling through Twitter and you see your local 80-year-old representative tweeting about gun control laws, don’t be alarmed, they’re just doing their best to fit in with the shifting times.

Since 2016, I’ve seen a gradual rise in political activism on social media. The presidential election outcome fueled people to stand up for what they believed was right; many people took to the streets and to the polls, or even started to prepare for the elections that were occurring two years later. However, there were still some people who were able to utilize another effective method: media activism. Ever since the 2016 presidential election, I’ve seen my Twitter and Instagram feeds flooded with posts about saving the environment and encouraging people to vote.

“People were able to live with their privilege and now they want to prove they’re right. People now pay more attention to what they are reading which is really helpful,” sophomore Alice Gottesman states.

According to a Pew Research Center study from 2018, approximately 35 percent of all social media users have made a post about a political topic that may concern them.

“I’m not trying to convince anyone that they’re wrong or I’m right. The more people are exposed to [it] the more they feel invested in it,” Gottesman says.

Social media also provides people with the ability to connect with other people who share similar beliefs and experiences as them. In December of 2017, the #MeToo movement entered popular culture despite being started in the early 2000’s by Tarana Burke. In addition, this formation of communities helped spark the #BlackLivesMatter movement early on.

According to NPR, in the first three years since its creation in 2013, there were over 40 million posts using the Black Lives Matter hashtag. This tag, accompanied by many others calling for an end to racially-driven police murders, were influential in triggering the rise of social media activism.

“People turn to social media because that is where they have a following  you can add links for people to look into and feel more connected on a topic,” Gottesman adds.
Which brings up an additional point. As students, many of us don’t have an extremely large audience, but we constantly see people using whatever platform they do have to help elaborate upon a topic.

“Somebody who lives in a small town in Wyoming or Kentucky, if they have a decent sized following, they can get their point across and get ‘trending,’” senior Brea Matthews states.

The walkout last Friday [March 15] was largely publicized through social media platforms locally, nationally and internationally. Many politicians have been taking to Instagram, Twitter or Facebook. Donald Trump is infamous for his Twitter addiction; however, many other politicians are doing some of the same things as President Trump, just not as often and as acerbic as Trump.

Social media also allows for politicians to connect with their supporters. New York representative Alexandra Ocasio-Cortez famously went on Instagram Live in November and made mac-and-cheese while answering questions her fans asked her.

“Because [Ocasio-Cortez] is of a younger generation and can appeal to people and reference pop culture effectively and clapback people can feel like relate to her,” Matthews adds.

Democratic presidential candidate Beto O’Rourke is in charge of his own social media, and uses the Facebook Live feature to help his campaign for Texas senator in 2018.

During the Illinois gubernatorial election, Gov. JB Pritzker spent nearly $150 million dollars according to the Chicago Tribune. — $30 million of which were spent on online ads. Probably explains why before the election every Youtube video had a ten second ad for him.

However, all this usage of social media does have its downsides. According to a survey conducted by Axios in 2018, 72 percent of all Americans believe that news sources “report news they know to be fake, false, or misleading.” In 2018, 31 percent of Americans said they experienced fake news once a week span according to statista.com. Platforms such as Facebook are trying to stop the spread of fake news.
According to Facebook’s statement on their plan for stopping fake news, they plan to “fight the spread of false news in three key areas: disrupting economic incentives because most false news is financially motivated; building new products to curb the spread of false news; and helping people make more informed decisions when they encounter false news.” Facebook is where most fake news is spread. The average age of Facebook users in the US are 40.5, according to chron.com. Older generations, such as Gen X and the Baby Boomers are more susceptible to spreading fake news, according to The Washington Post.

That 80-year-old senator tweeting about gun control laws is doing what the younger generation has been influencing him to do, fit in and adapt because in 2019, one of the most effective ways of broadcasting yourself is through social media.