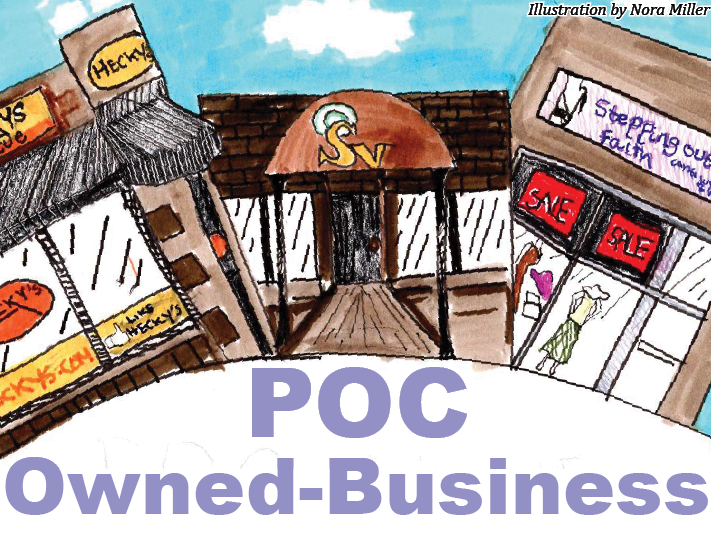 In 1934, when the National Housing Act — also known as “redlining” — was enacted, people of color living in the United States were prohibited from inhabiting many areas — meaning communities of color had to create their own businesses to shop from, given the little access they had to the white businesses. These community members created their own products, shops and businesses and were able to thrive on the business of their fellow residents. Though segregation continued and continues to exist, once it was considered illegal to segregate businesses, gentrification influenced communities, allowing larger white businesses to be vacuums for the consumers’ money and success.

In rapper and activist Killer Mike’s TV series called “Trigger Warning with Killer Mike,” he attempts to “live black” for three days in Georgia — only using and buying black products, black owned and manufactured transportation, black grown and sold food. Unable to find a black owned facility in Athens, Georgia he was forced to sleep on a park bench. The only way he was able to keep his money in the black community for the night was to sleep outside.

In addition to addressing the systemic issues, “any serious attempt to close the racial wealth gap and build Black American wealth must leverage the trillion dollars of buying power controlled by the Black American,” wrote Marc Morial, president and CEO, National Urban League in a review of the book “One Black Year.” We would pose that this extends beyond just the black and white binary to communities of color more broadly and the responsibility of ourselves (Collins and Stitley) as white consumers.

There are a wide variety of Chicagoland-based businesses owned by people of color that can be acknowledged and supported. The ones on this page are just some businesses, but there are many others in the community and across the country. When deciding where to go get dinner, or where to browse online, and you have the resources to do so, consider one of these businesses below [and those not listed].

Stepping Out on Faith

“Before my husband died, it was really a pipedream. He said to me before he died, ‘Vivian you gotta promise me that you’ll open up your shop. You’ll be good at it.’ He said, ‘you have to step out on faith sometimes cause people will come, and it will be a success,” Vivian Killeberew says.

“Thrifting is great cause you never know what you’re gonna find. Everything is such a treasure,” Killeberw says. “It has a story, and it has a history.”

Vivian Killeberew, who identifies as a African-American woman, opened the store in 2009 following her late-husband’s death.
“I knew fashion. It was easier for me to do something that I love, something that’s a lot of fun. And, you know, you can make a living at the same time,” she says.

Additionally, Stepping Out on Faith partners with a few shelters helping women through “desperate situations,” along with providing clothes for women attending job interviews.

“[I decided to partner] cause it’s important to give back,” Killeberew explains. “Because everybody always needs help at some point, at some time in their lives.”

“Everything is based on small businesses. Before there were malls, and there were big department stores, there were your local store,” Killeberew explains. “You knew the people at your store. Whether you were able to pay for your groceries all at once or you had an ongoing deal with your butcher.”

Killeberew later went on to say, “I think with small business you get to know people. It’s like a family. Just supporting each other and trying to help each other make it through.”

Other Chicagoland Based, POC Owned Businesses

This list does not encompass every business whose owner identifies at a person of color. However, these are several businesses in the area:

There are a multitude of sites that offer POC-made products and services. Here are just a few that sell things from food, to birthday cards to handmade jewelry:

EyesSeeMe.com: “to create programs that increase childhood literacy for under-served communities and to promote African American History and multicultural literature that will increase respect and tolerance for diverse cultures.”

WeBuyBlack: “More than a marketplace for black owned businesses, we’re a movement to see social and economical justice globally.”

A Crafty Arab: “I am a Libyan American who creates art to promote a positive image of Arab and Islamic culture.”

Benue Co.: “We are committed to making you fall in love with your skin; are you? At Benue Co, we understand that just like people, skin is diverse.”

Cheekbone Beauty: “Cheekbone Beauty will be supporting First Nations Child & Family Caring Society of Canada with 10 percent of profits from all purchases. “