The 411 on the 504: Students are challenged with obtaining necessary accommodations 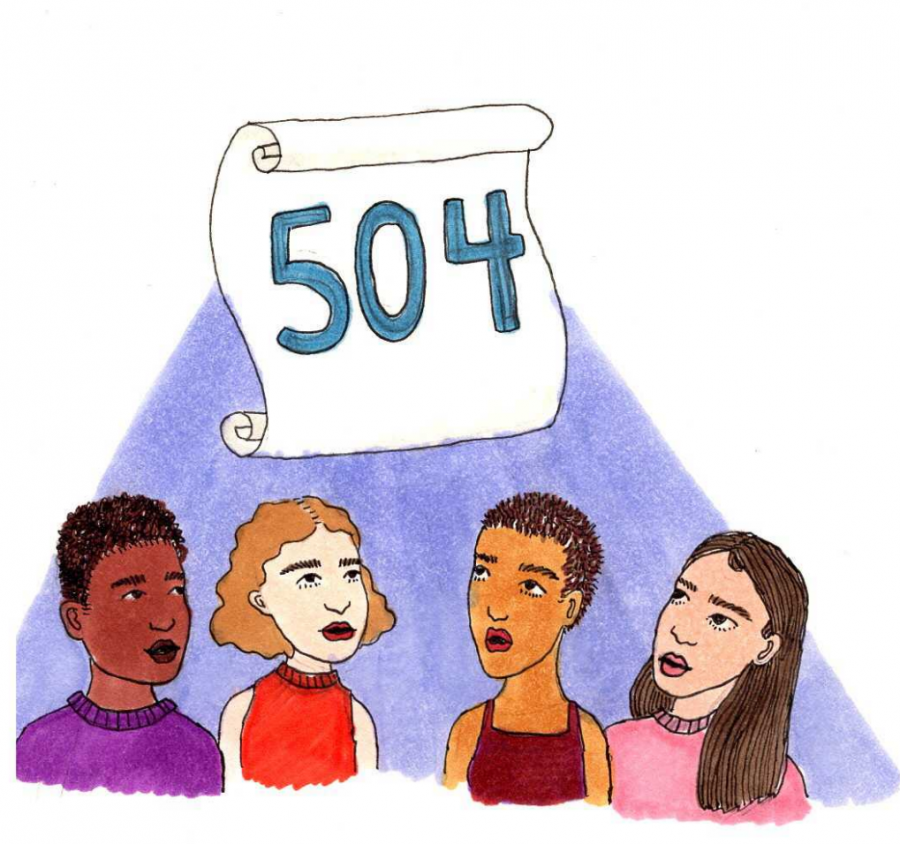 Individuals with mental illnesses, chronic illnesses and cognitive differences have faced a wide range of struggles when attempting to function in the school system not historically designed for them. In response, a federal law was passed in 1973 which was constructed to protect and aid these students through accommodations. However, 45 years later, students are still discussing the complexities that lie within the embodiment of this law: the IEP and 504 plans.

Overview–IEP Versus 504
“The distinction between both is IEPs are a special education law; Section 504 is a civil rights disscrimination law,” Director of Special Education Lanée Walls says. “Under the 504, it prevents students with disabilities from being discriminated against, so they get their accommodations.”

The 504 plan was created to ensure that students with legally identified mental health impairments, chronic illnesses and cognitive differences [impairments of skills involving processing and understanding information–ADHD (Attention-deficit/hyperactivity disorder) for example] –acquire accommodations to achieve academic success, as reported by the DO-IT Knowledge Base. With a 504, these students will receive accommodations predominantly within their classroom settings.

“There are three criteria under section 504. Is there a diagnosis? Is it documented by a licensed therapist or physician? Does the diagnosis substantially limit a life functioning activity?” Director of Student Services Dondelayo White says. “If the answer to that is yes, then the student is granted a 504.”

An IEP [Individualized Education Plan], in contrast to a 504, gives specialized services to students with disabilities. Accommodations might be, but are not limited to, speech-language pathology and audiology services, physical and occupational therapy and orientation and mobility services. These will often take place outside of the traditional classroom.

Those that acquire a 504 receive accommodations based on the circumstances of their impairments in the traditional classroom setting. Accommodations include, but are not limited to, extra time on tests and assignments, verbal visual or technology aids and preferential seating. The accommodations are used to change one’s learning environments without having to alter the content of the curriculum or work. The Section 504 appendix states that when 504 teams decide the student’s needs, general accommodations are created for each specific recipient. They deal with environmental, organizational, behavioral, presentational and assessment strategies. Accommodations can also vary due to the school’s design.

The Two Plans’ Intersection at ETHS
ETHS, following state law, currently does not allow an individual to have both an IEP and 504. Once they reach high school, the students with impairments intersecting under the two plans who were granted both plans in middle and elementary school, must choose to keep one. According to White, “you don’t need both.”

ETHS senior, Alex Johnson*, was granted both the 504 plan and an IEP in middle school. She says that she was made to choose between the speech therapy her IEP granted, and the extra time allowed by her 504 when she reached high school. Johnson’s speech therapy goal was to reach 80 percent on the speaking test. She had reached 75 percent when she was had to decide between the two plans. She chose her 504. The speech therapy did not carry over to her new personalized plan under the 504 and she did not end up reaching her goal of an 80 percent on the test.

School Environment
“If a student has a 504 plan, it’s a mandated plan. It’s a part of the American Disabilities Act, so it is a federal law,” White says. “So it doesn’t matter the level of classes the students are in, teachers have to provide those accommodations that are aligned in the 504 plan.”

However, educational psychologist Dr. Ari Goldstein says that he sees pushback from honors and AP teachers when it comes to accommodating their students throughout the Chicagoland area.

“In the higher level schools like Evanston and New Trier, the teachers in the higher tracks are less likely to allow and provide those supports,” Goldstein says. “They feel that if the students are at that level, they should be working at that level without any support.”

The appearance of success in the classroom can affect accessibility to a 504. Speaking to this, Riley Brown*, senior student identifying as a woman, says, “ I strongly believe that my depression affects my school work on a day to day basis to not qualify for a 504 plan because I participate in class and receive As’ is beyond ridiculous.” She elaborates, “I was told that I am too good of a student.”

“The teachers were all really understanding about it,” Bailey says. “I was like ‘I’m probably not gonna use it in class’ and they were like, ‘ok, but if you do just let us know and we’ll be happy to help in any way we can.”

Economic Accessibility
Some students who seek academic accommodations through an IEP or a 504 plan may get shut down by their school due to lack of resources. Evaluations are both time consuming and expensive for the school and usually, school psychologists are short staffed.

“In my clinic, we do a sliding scale.” Goldstein says. “Where if someone doesn’t have insurance, [is self pay] it’s $2500 for an evaluation but we slide all the way down to $975 based on their income and if they even can’t afford that we will put them with a postdoc [postdoctoral] student and let them do the testing; I will supervise it and charge them with $500.”

While senior Charlie Miller* was able to afford this, not every student in need of an evaluation can.
“With people who aren’t in my circumstances, or couldn’t pay for it, and then they don’t have this [test results] to back them up. I don’t even know if people would consider them for the 504.” Miller says.

Not all students can afford the necessary evaluations. White says, “Yes, there are instances when we recognize that a student is having some difficulties that we do conduct evaluations or a screenings on our own between the grade level psychologist and the grade level social worker.”

Gender
Mainstream perceptions point to males being more prone to learning disabilities, but studies show otherwise. Scientific research conducted by Bob Cunninhan, advisor-in-residence for Understood.org, a group of non profit organizations providing information on learning and attention issues, found that the gender gap doesn’t exist when it comes to learning and attention problems. He elaborates on how the gap was created because teachers recommend males almost twice as much as females for accommodations.

“Boys are identified at a much higher level because the boys, first of all, tend to have the hyperactive component a little bit more,” Goldstein says. “As a general rule, females tend to internalize, so when a girl is struggling because of focus or attention or executive issues they tend to be more spacy and day dreamy [and] teachers don’t notice them.”
Bailey, who identifies as a man, says about the process of obtaining a 504, “For me, it was extremely easy. Like shockingly easy. I thought it was gonna be far more difficult than it was,”

Brown says, “I appear to participate in class is ridiculous,” she elaborates, “I have given up on trying to obtain a 504 plan because the process is so ridiculous and in order to get one you have to contact way too many people, half of which will never get back to you.”

Section 504 of the Rehabilitation Act of 1973 protects students with disabilities from discrimination. However racial discrimination in 504 plan decisions exists. Research in the Journal of American Academy of Pediatrics, written by Dr. Paul L. Morgan, Jeremy Staff, Marianne M. Hillemeier, George Farkas and Steven Maczuga, titled “Racial and Ethnic Disparities in ADHD Diagnosis From Kindergarten to Eighth Grade,” states that race/ethnic minorities had 69 percent lower odds than whites of receiving an ADHD diagnosis. Research done by The Advocacy Institute shows that 65 percent of 504 plan holders are white and the 2017- 2018 Illinois Report Card of ETHS shows that 28 percent of IEP holders are white. Illinois Report Card indicates that a majority of the IEP holders at ETHS are either black or Hispanic. The same study concluded that three percent of 504 holders are Asian.

“Every time someone would find out that I have one [504] they’d look confused.” Johnson says. “And they’re like ‘oh but you’re so smart; you’re advanced in every class.’ And all this type of stuff, and I’m like what do you mean? And then they’ll say, ‘you know…you’re Asian’.”

Intersecting Accessibility, Gender & Race
White and male identifying student Miller, said in response to whether or not his race and/or gender affected the process, “I’m sure. It coud have. I don’t really have necessarily any evidence, but I know a lot of people and they’ve had a very dificult time getting 504s and IEPs and stuff like that.” Miller says. “I know people who aren’t white- cis- heterosexuels that have had problems with it.”

Morgan, Staff, Hillemeier, Farkas and Maczuga state in their article that the chances of an individual receiving a 504 plan are increased if they have an adult mother figure, they identify as a male, have English as a first language, and openly express behavioral issues. Factors that decrease their chances include the ability to stay engaged and attentive in classrooms, demonstrating above average academic achievements and not having health insurance.

“I am a white cis-gender female, so I obviously have a ton of privilege. However, I feel as though my gender has played a major role in the reason I have been denied a 504. When one thinks of a kid who has a 504 plan, you typically think about a prepubescent boys with ADHD. Not a mature female with depression and anxiety,” Brown says. “No matter how many times I beg and plead for a 504 plan, I always get denied.”

*Minors names have been changed to protect the privacy of students.