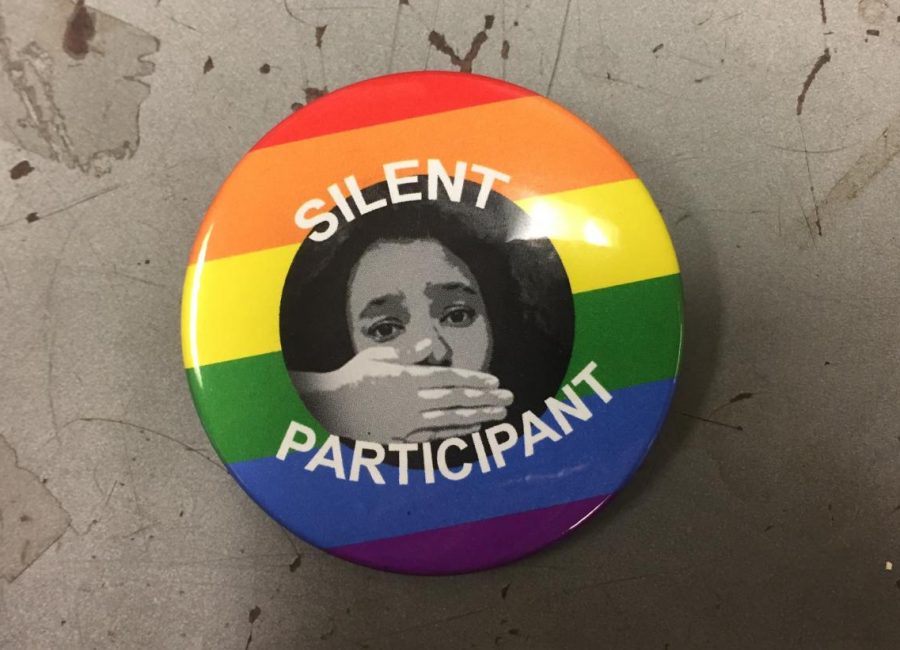 More than 300 students are participating in today’s ETHS Day of Silence in an effort to spread awareness about the silencing effects of harassment towards members of the LGBTQIA+ community.

“The Day of Silence is an opportunity to partake in a different form of protest and serves as a way to bring attention to LGBTQ+ issues,” Day of Silence participant and senior Yolanda Odufuwa said. “For me, this event is about disrupting spaces that continually ignore and disapprove of queer and trans people.”

Today marks the 21st time that students will participate in the Day of Silence at ETHS, but the day itself reaches much further than the walls of ETHS The Day of Silence was first organized at the University of Virginia in 1996 as just over 150 participants did not speak throughout their days, according to the Gay, Lesbian and Straight Education Network (GLSEN), but student organizers took the event to the national stage the following year.

The day is now sponsored and organized by GLSEN which reports that in 2008 (the most recent statistic available), hundreds of thousands of students and faculty at more than 8,000 schools across the US partook in the event. Last year, participants hailed from all 50 US states, as well as from multiple countries around the world and attended grade schools, middle schools, high schools and colleges.

At ETHS, the Day of Silence is a run through the Gender and Sexuality Alliance Club (GSA). While GSA sponsors help coordinate the event, the day is student run and organized. Students this year are attempting to inform those who participate what the day is truly about.

“This year, [students] are trying to shift what the Day of Silence does and how it works at ETHS, because they’re concerned that the message of why people participate in the Day of Silence is lost on the general students population,” GSA Sponsor William Farmer said. “While the faculty may understand why students do it, we have some students who just participate without knowing its purpose and more for school avoidance.”

In addition to spreading awareness on what the Day of Silence is about, some students are attempting to share their stories of silence in order to get other students involved and broaden the meaning of the day for others.

“Evanston is a wonderful environment to exist and come out as a queer person but coming out is still hard and can be difficult for many LGBTQ+ people,” Day of Silence participant and junior Owen Lindsey explained. “I wanted to use our standing as an open, inclusive environment to create a pedestal for the voices of those that still are silenced, not having the same privileges as many out queer people.”

Additionally, students want to inform others that the Day of Silence is not the only way to bring light to the everyday problems that the LGBTQIA+ community faces.

“I hope people learn that there are many different ways to engage and bring attention to LGBTQ+ issues, the Day of Silence is simply one method,” Odufuwa said. “It’s our job to continue working and pushing for change and speaking up every day after that. Some people are more interested in their comfort level than justice, that is unacceptable. That’s why it’s important to highlight these topics.”

Along with highlight present topics, students are starting new traditions for the Day of Silence, such as the Emerging Voices program.

“Emerging Voices is a new Day of Silence tradition we’re starting this year at ETHS,” Lindsey said. “The premise is that LGBTQ+ people spend years of their lives in silence, and in the face of that we want to bring some of their anonymous stories into the open.”

Sweeney also believes that Emerging Voices will not only will this benefit those being silenced, but bystanders as well.

“ETHS falls short in its lessons in empathetic narratives of queer students,” Sweeney said. “To bring our own E-Town education to the Day of Silence, I thought that sharing stories would let our bystanders be directly involved in the queer community by hearing the stories of silenced LGBTQ+ students.”