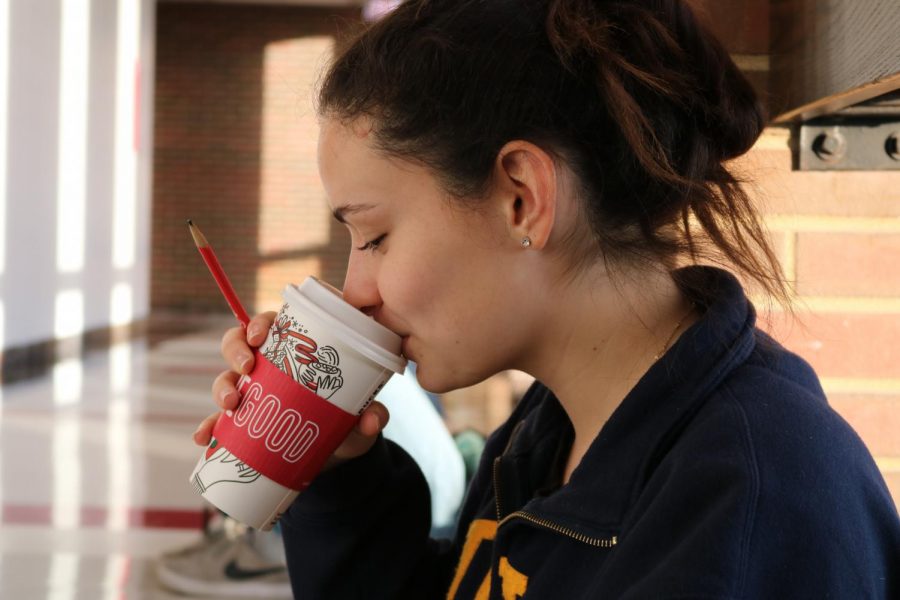 75 percent of teens consume caffeinated beverages, but few know how they affect their metabolism and cognitive functions.

“Caffeine has similar effects to many mood altering drugs, in some cases more dangerous compared to marijuana and other recreational drugs that inhibit memory dysfunction,” head nurse Lisa Walters says. Walters reveals what many teens do not know: caffeine affects teenagers in similar ways to illicit drugs.

Typically a student will use caffeine to enhance their studying, such as pulling an all-nighter to prepare for an exam. In some cases, it has also been used to combat age-related memory issues. Despite having some benefits, caffeine addiction has drawn comparisons to alcoholism and marijuana dependency.

The effects of withdrawal can be just as devastating. Stronger symptoms include anxiety attacks, drowsiness and irritability among others found on  Healthline.com. This is why drinking caffeinated beverages is not recommended, especially for teens.

But freshman Alliey Cunningham says she doesn’t feel like she is herself without caffeine.

“I feel more pain, the caffeine sort of drowns out that pain,” she says.  She also says that this only occurs after withdrawal following longer periods of consumption.

Another common use of caffeine is to enhance brain function, specifically, focus, studying longevity, and other types of studying techniques. Northwestern neuroscientist Nicholas Bannon called it an “adenosine receptor antagonist.”

“The adenosine in the brain cells makes the cells less active and conserves energy,” Bannon says. “Caffeine tricks your brain into thinking it is less tired than it actually is.”

This highlights the “false effects” of caffeine. The substance convinces the brain that it is not tired. Later, once it runs out, the user will become very tired. This is why caffeine is not recommended for late nights of studying– the energy boost it provides is unsustainable.

In a survey of 31 students, 92 percent of subjects said they felt better when they drank water rather than caffeinated drinks. Water can provides the same energy boost as caffeine without the side-effects or risk of long-term dependency.

The average adolescent should sleep about  eight and a half or nine per night. However due to the stressful school workloads, in recent years many teens are no longer sleeping the necessary amount. Students are drinking more caffeine to stay up later in order to study. According to Newportacademy.com, the sleep deprivation caused by caffeine has costly side effects including  drowsiness during the day as well as mood swings and increased stress.

Caffeine can appear to be beneficial to the human body in the short term, but this is rarely the case. The costs of caffeine dependence far out way any benefits. There are effective alternatives like water, or, for users trying to reduce their dependency, decaffeinated options. More important though, it eliminating the initial need to caffeine’s energy boost. This means both better planning and anti-procrastination habits from teens, as well as more reasonable workloads are school. Without the need to stay up as late and wake up as early, teens could increase their productivity without turning to caffeine.