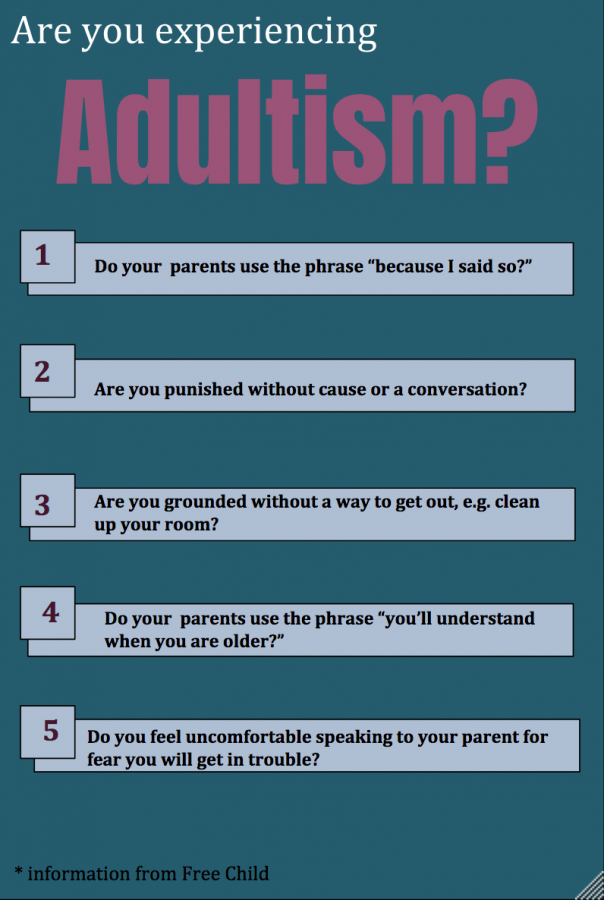 Parents obtain control over their children, creating a sense of adultism, impacting their relationship.

“It is a fairly new concept, especially in the past two or three years. Children have brought this up as a new issue and are trying to explain how it feels,” therapist Melinda Stengel says.  “Helpless is a terrible way to feel in life. Kids start to never raise their hand in class and it lowers their self-esteem.”

Adultism is defined as the “behaviors and attitudes based on the assumptions that adults are better than young people, and entitled to act upon young people without agreement.”

Adultism is affecting students at ETHS as well as younger grades. This behavior has become a larger problem in recent years, sweeping the nation.

“We all need to feel like we have control in our life,” Stengel says. “I think one of the most important things is to make sure that a family is making compromises and not only one person is making a decision for a group. This way, no person can say that one person had to say over the other.”

Without this sense of control, students are becoming more rebellious because of adultism. Adults are making more and more rules and becoming strict, this is leading to kids acting out.

“I think that kids should have an input in decision making because it will allow the household to be more balanced.” freshman Abby Roman says.

Other students simply want adults to make informed decisions. “Before adults make any serious decision they should put themselves in their children’s shoes to see how it feels.” freshman Quinn Parks says.

According to Stengel, adultism with most of her clients when they are in middle school. In middle school, students start to realize that they have more rights and start hanging out with friends more which requires new rules. However, the power creating these new rules have may inflict a sense of superiority in the adult.

Adultism is starting to become an even bigger problem in our community, and the greater country, it impacts the relationships of youth to elders everywhere.

For more information go to https://freechild.org/discrimination-against-youth-voice/