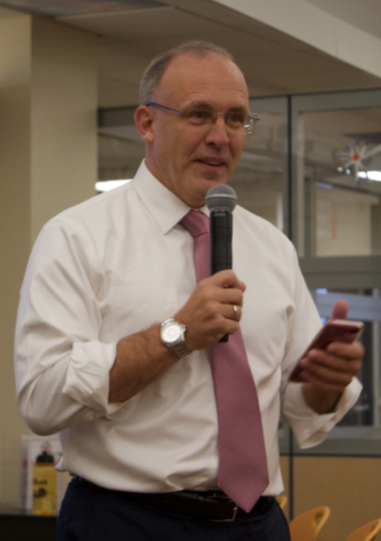 Mayor Hagerty speaks at the Meet the Mayor event.

Although Evanston is considered an active political community, many students seek a greater voice and place in the city’s politics; Mayor Steve Hagerty’s visit and discussions on Nov. 9 attempted to appease such students.

Mayor Hagerty spoke on the city’s immense amount of debt. He discussed his focus of helping the stimulation of growth in the financial sector of Evanston. This plan caused various responses among students, from concern to encouragement.

There are various ways that the mayor discussed this economic stimulation. One example is bringing in big businesses, like the Urban Target in downtown Evanston, to create more revenue through sales tax and job creation. He also mentioned the vacancy at 1111 Chicago Ave. There were discussions of possibly a Binny’s Beverage Depot buying the space.

This sparked a discussion between students and the mayor about the presence of big businesses in Evanston and the toll they take on small, family-owned businesses.

“The mayor’s visit was an attempt to connect students to community leaders and city government,” Student Representative Emma Stein said. “Our city needs outspoken and conscious youth to advocate for their needs. The mayor’s visit is a product of a greater push for student voice.”

By speaking at the school, Hagerty was illustrating that students and their outlook on current issues in Evanston is something to be taken seriously. In fact, some of the decisions made in the mayoral office affect student life here, even if it is indirectly.

The mayor brought up that as property taxes go up, the percent of certain minorities, specifically the black population of Evanston, has been decreasing,” sophomore Julia English said. “I think it’s a very important issue that doesn’t just affect us individually, but as a whole school.”

One peculiar issue that was discussed during the fifth period block with the Mayor was the lack of a bowling alley in Evanston. He discussed how a bowling alley would not bring in enough revenue to be sustainable. Many students were disappointed by this.

Another key question that was raised was how the police force in Evanston is trained in diminishing racial profiling. Since Evanston is such a diverse community, it is imperative to have police that are fair and professional. The mayor undertook this challenge after receiving numerous e-mails, he claims to be seeking improved training and monitoring for the EPD.

Students at the speech say they were impressed by the Mayor’s consistency in discussing issues. “While [Steve Hagerty] discussed his countless daily emails, I was impacted by his dedication to respond to each one,” senior Jake Marks said.

Hagerty also spoke on residential development in Evanston, environmental sustainability, racial equity and the opportunity for high school students to go to the beach for free.

Many students felt slighted at the lack of open questioning in some of his earlier speeches, but Mayor Hagerty seemed to make an adjustment throughout the day to encourage a discussion between himself and the youth of Evanston.