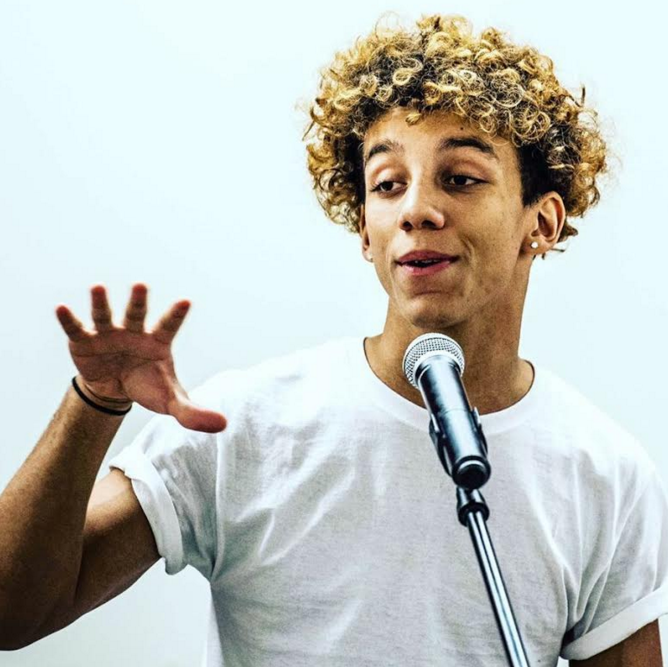 At first glance, senior Noah McKay seems like a normal student who loves pizza rolls and his sociology class. However, if you dig a little deeper, you’ll discover that Noah has some pretty extravagant talent and has been producing rap and hip hop music since his freshman year. Going by the name “Noah Chris” on Soundcloud, he has now amassed over 900 followers and over 400 reposts of his music. Noah is hoping to continue producing music and wants to eventually make it a full career. In total, Noah has worked and collaborated on nine different songs, and continues to gain great popularity in the music industry.

How did you first get started in music?

First, I started off as a spoken word poet. In middle school, I tried to write a rap, but it didn’t really work out. So instead of rap, I decided to do spoken word. That’s where my writing first started. Then, freshmen year, I started doing music again, and I started to incorporate rapping and singing into my work.

Who are some of the biggest influences of your music?

I was born in Detroit, so the only person I really listened to was Eminem. I still think he’s the greatest rapper ever. I grew up down the street from where he grew up, and seeing how he was able to come up out of nowhere and become something huge, I thought that I would be able to do that too in a different way.

What are some of the best moments of your music career?

I got to perform in front of Chance the Rapper, I’ve opened for A Boogie, I performed for the Secretary of State, Louder Than A Bomb was great, I also performed at a bunch of venues in downtown Chicago. It’s really cool.

How has your music changed over your career?

At first, I would talk about my pains, insecurities, tough stuff that I’ve been through. But I find that as I keep making music, I keep finding ways to love myself, if that makes sense.

What is an event in your life that has shaped your music?

What else do you do outside of school besides music?

I work a lot as a busboy, and I do that to make money so I can record my music. I record at a studio in downtown Chicago, and I also have a recording studio in my basement, so it helps to fund that.

How do you think poetry and music intersect?

They’re both really the same thing. People try to find ways to separate rap from poetry but rap is poetry, just in a different form. It’s all the same thing, there’s no real difference, it’s all art.

What are your future aspirations for your music career? Where do you see yourself in five years?