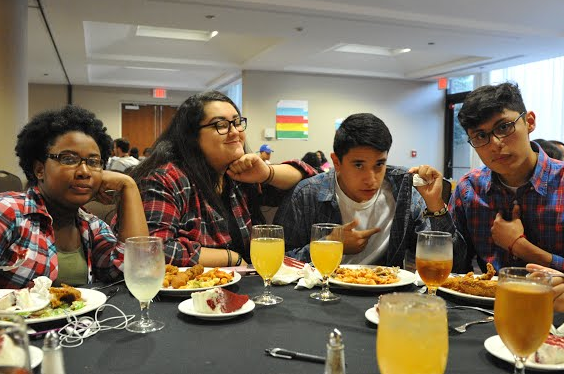 Though America has proven itself to be a country where racism is still extremely prevalent, Students Organized Against Racism (SOAR) is fighting back.

“SOAR tries to provide a space for students to learn how to communicate with each other and to disrupt racist systems of oppression,” says sponsor Corey Winchester.

The SOAR board facilitates a two day conferences where Evanston students are able to immerse themselves in the fight against racism. The conference can act as a space where people can speak on their own encounters with racism, as well as a place where students can learn about what they can do to continue the fight.

There are two, two day conferences each year. The last one, which took place on Feb. 23 and 24, was the first conference that included students from other schools such as: New Trier, Niles North, and even some 8th graders from District 65.

SOAR also facilitates different programs throughout the school including Equity Zones, Mix It Up Day, and The Alliance.

Equity Zones are safe spaces where students can go to deal with issues regarding equity and identity. Any student is able to fill out a form, nominating a teacher or staff member to make their classroom an Equity Zone.

Mix it Up Day is when the SOAR board heads to the freshman cafeteria and encourages all students to sit with new people. The Alliance is a space where SOAR leaders can help to resolve race issues between teachers and students of color. Students who feel as though they are undergoing racism in class can go to The Alliance for support.

Many of the students on the SOAR board are also leading The Minority Student Achievement Network (MSAN). Like SOAR, this program is in place to support students hindered by institutional racism. The MSAN program at ETHS was created when student leaders went to the MSAN conference in Chapel Hill, North Carolina.

“On the last day, we all broke into action groups,” says one of the leaders of MSAN, Chirasree Mandal. “We had a presentation on what it means to take action in our communities and the best steps towards implementing programs to get minority students achieving.”

It was in Chapel Hill where the students were able to make an action plan to further the support of students of color. They named the plan “The Agency” because the goal was to increase the agency of students, or in other words, increase an individual’s ability to accomplish what they seek to do.

Essentially, there are three different phases in The Agency. Two of these phases include promoting Kingian non-violence programs and the implementation of project SHAPE.

“Project SHAPE is a high school readiness program that involves MSAN going to middle schools for a half day long conference,” says Mandal. “We are basically facilitating a comfortable transition into freshman year, tailored towards students of color.”

The other aspect of the plan is a new project that MSAN has been working on; it’s a mentoring program for students of color.

Through this mentoring program, sophomores, juniors, and seniors will act as mentors towards freshman. The mentors are there to help freshmen with various aspects of high school, such as guiding them through athletics, academics, etc.

“Mentors will be there to answer questions and be a resource to help negotiate the halls of ETHS,” says Winchester. “They will help provide another layer of support.”

At first, the program was supposed to cater to both freshmen and sophomores. However, the students and sponsors leading the project find it more effective to have freshmen exclusively act as the mentees.

The main goal of the mentoring program was originally to guide students of color who planned on taking Honors and AP level courses. Though this is still a big aspect in the program, the mentors wanted to take on responsibilities that would be beneficial to all students.

“Not everyone is interested in going to college. That’s not always the end all be all for everyone,” says Winchester.

“Putting kids in AP classes is not the only solution. Its also about having POC led solutions and having students of color determine what success means to them,” Mandal adds.

Ultimately, SOAR and MSAN want to create racial consciousness among students. They want to provide safe spaces for students of color, as well as educate those on the effects of racism.

“We really try to deconstruct and interrupt the opportunity gap that exists between students of color and white students,” says Winchester.