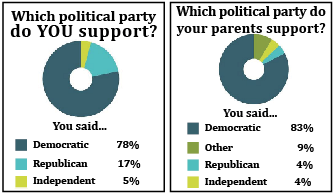 A chip off the old block.

Many of you have the same political views as your parents despite doing research.

“My parents and I have similar views, but they let me create my own political beliefs.  Of course there is some influence, but I end up making my own decision,” says sophomore class senator Nadav Sered-Schoenberg.

Young adults tend to fall under the same political beliefs as their parents.  This is becoming particularly evident because of the upcoming election.

Political socialization is the process in which people formulate their political beliefs, and it occurs specifically through family.Factors like economic status, peer influence and religion also impact political views.

“This is the first election that I really understand what is happening around the world and in our country,” junior Gaby Godinez says. “I chose my own candidate, but they still happen to be someone my family supports too.”

Evanston falls on the liberal side of the political spectrum, and this impacts the socialization of students.

Whether someone’s parents are democratic or republican affects their political opinions. Classroom debates or just normal conversations are some of the first instances of political socialization.

It is very difficult for many to overcome this initial socialization.

Gaby and Nadav, both liberal, have beliefs similar to their parents.  However, there are also students with conservative values at ETHS.

“In elementary and middle school everyone would associate right-wing with bad and left-wing with good. I went out and did research to form my own ideas and educate myself,” sophomore Will Peterson says.

Even so, a teenager’s rebellious nature can cause them to branch out and have different opinions than their parents.

Some students emphatically say that they have the same political beliefs as their parents but they aren’t impacted by their opinions.  Many students with politically liberal parents end up also being liberal due to growing up in a more this environment.