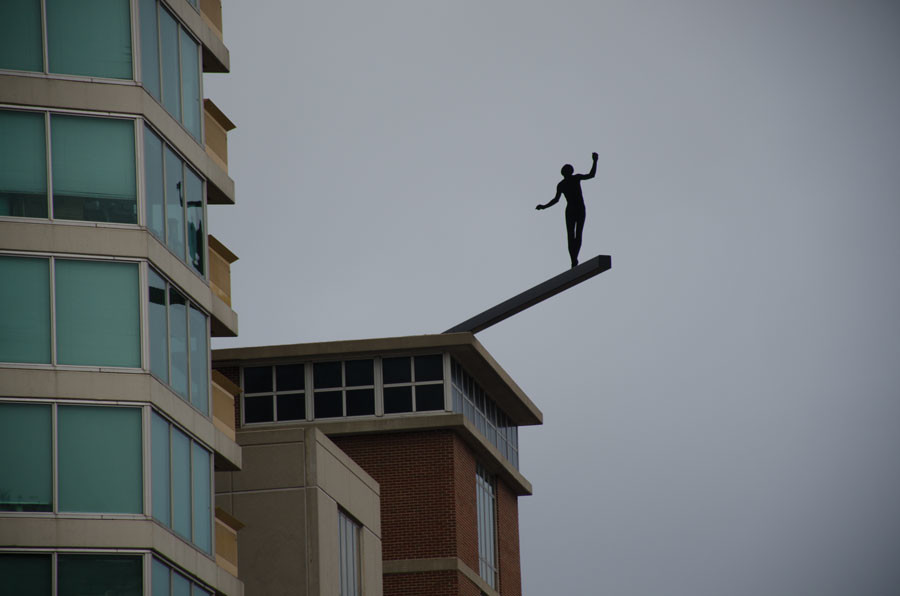 One of the biggest issues in America is suicide, but parking garage suicides have become a big issue right in downtown Evanston.
“People commit suicide, but it’s the public ones we see, take note of and make the news. Other people do commit suicide in Evanston that we don’t hear about,” says alderman Jane Grover.
Many of the public suicides have taken place off of parking garages around Evanston. The most recent one took place on Oct. 28 just before noon. According to the Chicago Tribune, a 35 year old man jumped from a deck of the Sherman Plaza parking garage. This is just one of three suicides from parking garages since 2013. There has also been one attempt where the suicidal person was saved by an off duty officer.
Coincidentally, all four of these instances have taken place since the sculpture depicting a person walking off of the Maple parking garage doing a sort of circus, tightrope act. This sculpture has caused a lot of controversy.
“I don’t know how likely it is for someone going off the one three blocks away at Davis and Benson or St. Francis garage to be thinking of that. I don’t really see a correlation between the two myself,” comments Evanston Police department commander Joe Dugan.
Jane Grover agrees with Dugan regarding the sculpture.
“My opinion is that’s art. It’s art in all the ways art challenges us, delights us and makes us smile and laugh. That’s my interpretation of that sculpture,” mentions Jane.
However, their view is only one side of the controversy. People like alderman Ann Rainey believe that the sculpture is bizarre and implies potential suicide. This is per Evanston Now. The sculpture also cost the city $105,000 of public art money which is paid by the residents’ tax dollars.
Other than getting rid of the sculpture, there have been various solutions for this issue proposed to the City of Evanston. One of the offered solutions was to put fencing at the top of the parking garages to prevent the suicides. That proposal was turned down by City Council in July of 2014. The idea was suggested after the first two suicides in Nov. 2013.
“Netting or fencing would help reduce the number of suicides off of parking garages, but I don’t know if it would reduce the number of suicides in general,” says commander Dugan. “[Fencing] might help for someone coming off the garage and landing on a pedestrian. That is another person getting hurt, which is not a good thing.”
There still is not anything officially being done in the city to prevent these suicides. The logic behind this is that suicide is something that is completely in the moment, and people can unfortunately find a way to do it no matter what. However, the main solution is to catch these issues early on so it doesn’t turn into something like suicide.
ETHS has clubs like Erika’s Lighthouse that helps inform students about depressions and mental illness. It was started by a mother who lost her daughter to suicide.
“I heard about one the other week and I was really saddened by it. It is awful when someone is so unhappy that they think the only way things are going to get better is if they end their life,” says sophomore Millie Hawkins who is a member of Erika’s Lighthouse.
Suicide is something that typically affects friends and family of the victim. However, public suicides like the ones off of parking garages potentially affect the entire community of Evanston.