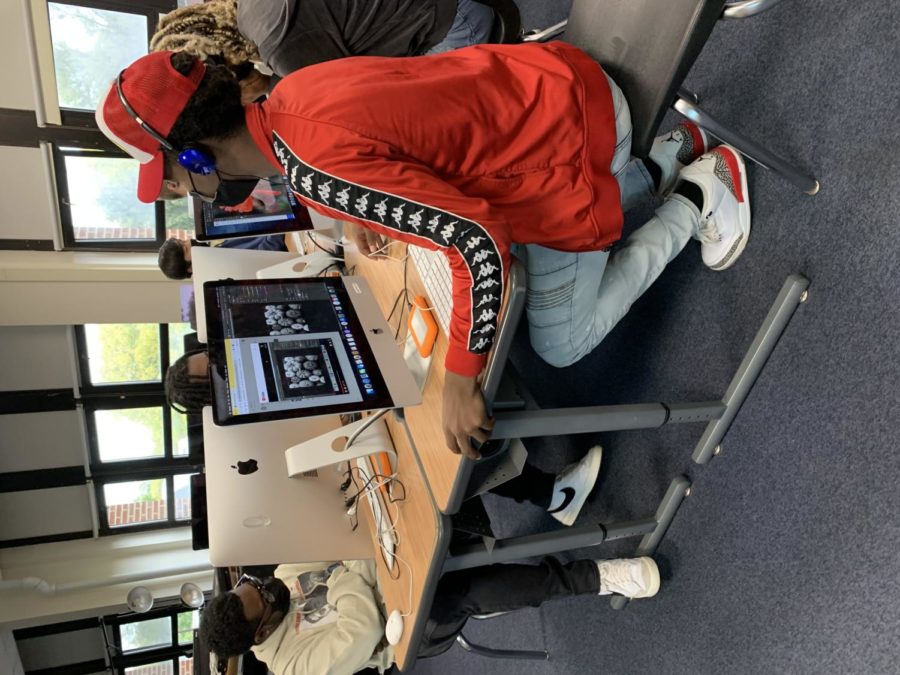 Civic engagement comes in various forms such as volunteering, national service, community organizing and voting. However, one of the lesser-known ways to participate in civic engagement is through the arts. Art is a form of expression and can be utilized to start conversations about divisive social issues in a unique, meaningful way.

Here, we examine how ETHS and the Evanston community get people involved in civic engagement to start these meaningful conversations through the arts.

Across the world, artists and musicians constantly stay informed to respond to current events and issues, usually pertaining to social activism and protests. ETHS-wise, it’s been challenging to get young musicians involved, especially after a virtual year and a pandemic.

However, there are a few classes and projects where students can explore social and political topics.

“In Music Tech One, a project that we are just starting on is one where students can take inspiration from source material that is non-musical,” Director of Choirs Sarah Zegree says. “It’s counterintuitive to what we would do in a music class, where we’re creating music, since this one sort of forces the students to think a little bit outside the musical world, but that could be in something that they’re seeing in the news, something that they’ve seen on social media or something that they feel like they can connect to.”

In addition to the ‘inspired by’ projects in Music Tech One, Jazz, a form of music that has been strongly linked to the civil rights movement and the fight for racial equality, is explored by students in many of the Jazz music programs like the Jazz bands and Vocal Jazz.

“Even though we take standards from decades and decades ago, I think a lot of [Jazz] is about exploring current events through music,” Zegree states. “ I think Jazz is a living breathing art form that is brought to us by Black musicians.”

“A dream of mine has always been to take students with me to the National Arts Advocacy Day on Capitol Hill,” Zegree says. “It’s a really powerful day to be a part of, where you get to actually talk to your elected representatives about getting funding to the programs that come back that indirectly or directly support artists and support the community.”

Theater has the ability to bring people of all backgrounds together. This gives productions the power to showcase empathy through the arts.

“Dramatic arts play an enormous part in terms of getting people to really see things from other people’s perspective, whether that’s a civic issue or a more personal issue, an issue of social justice or just an issue of basic empathy, that’s what art does,” Tim Herbert, a member of the ETHS theater department, says.

Both the curriculum of theater classes and shows performed at ETHS play a role in the connection between civic engagement and fine arts. In theater classes, students learn the history of theater and learn about the foundation of contemporary acting.

“In order to really look at [theater history], you have to look at social movements of the time. Theater’s trying to live up to its promise to be more representative and democratic; always has been,” Herbert explains.

Meanwhile, plays performed at ETHS have focused on topics important to the theater department and community. This fall, the theater department put on 12 Angry Jurors, a play about participating in civic duty and the impact it has on our society. In 2019, ETHS presented The Colored Museum, which showcased images of Black excellence in art and theater and has even performed a political satire before. These shows are all relevant to different aspects of political and social issues, but they share a common intention.

“We hope to create conversation around particular subjects. Theater is supposed to make you see things in someone else’s perspective and understand. There’s a human being at the center of every issue and every political controversy. The middle of every social issue—we can explore, discuss, see clearly and tell truthfully. The goal is that the audiences and students recognize that,” Herbert says.

Whether it’s animations, photos, art, commercials, graphic design or video, visual arts use visual communication to convey messages that are important or personal to the creator. In classes such as Video Production, students incorporate civic engagement into their documentary projects, focusing on issues or visions they are passionate about to make a change in their community.

“I have a student right now in my AP video class who just did a documentary about trying to get a skatepark in the community,” Video Production teacher Amy Moore says. “He’s interviewing the mayor. A bunch of people who work on a committee to try to get [a plan for a local skatepark] done, and then people are also antagonistic to it.”

In addition to documentary projects, students in Video Production Two work on a project called “Messages,” which has a theme to make inspiring messages or a call to action using text animations.

“The students used things that were important to them to create media to put out there,” Moore says. “We’re gonna have an exhibition based on [text animations], so hopefully we’ll get out there in the broader world, because that’s always the challenge.”

Moore is also runs Students Without Borders, a club comprised of students who are immigrants, undocumented, third-generation and other immigrant populations who fight for immigrant rights and undocumented students. In addition to getting government and police officers to agree on supporting these people in the community, Students Without Borders also does a great deal of active involvement using art.

“We have a button maker, we create T-shirts, we create posters and media related to the issue of immigration through [Students Without Borders],” Moore lists. “A bunch of students who happen to be in my classes that are involved in my club do a lot of active civic engagement.”

The Open Studio Project is a non-profit and social services organization located in Evanston that aims to provide an artistic outlet for children of all ages.

“We provide a safe space for people to lean into the challenges of civic and political life. We have seen a lot of art created that combats social justice issues,” Sarah Laing, Executive Director for the Open Studio Project, says.

The institution provides many unique opportunities to inspire growth through art and writing while creating a positive change in our society.

“One exhibit that was particularly powerful this year that we hosted was the REYS exhibit, where Evanston youth created powerful artwork about their experiences [with] trauma. The art was able to hold a broad definition for that, whether it was racism, immigration, gender identity or mental health issues related to the pandemic,” Laing says.

As well as the REYS exhibit, the studio also provided a doll exhibit about Chicago gun violence which soon advanced all over the city. This exhibit sought to change the views of teenagers on gun violence, teaching them how it could impact their lives strongly while also impacting their own communities. The exhibit was a convention to provide peoples’ own thoughts by letting them express themselves through dolls.

“We are currently working with ETHS, Y.O.U., Connections for the Homeless and Chicago Public Schools. We need a lot of help prepping supplies, particularly for the virtual programs. We also welcome partnerships in workshops and our gallery space,” Laing states. Laing believes that creativity is everyone’s birthright and that everyone is welcomed into the program and studio. If students are ever interested, they offer open art on Mondays from 2:09 to 3:45 in the Hub, which includes collage making, painting, drawing and more.

Through the vast array of different art projects offered in ETHS and Open Studio, it’s clear that art plays a critical role in how we engage with one another. As community members, we have more ways to engage and more chances to support other people in our community. Arts and culture are powerful tools in community building, and community strength carries us all.