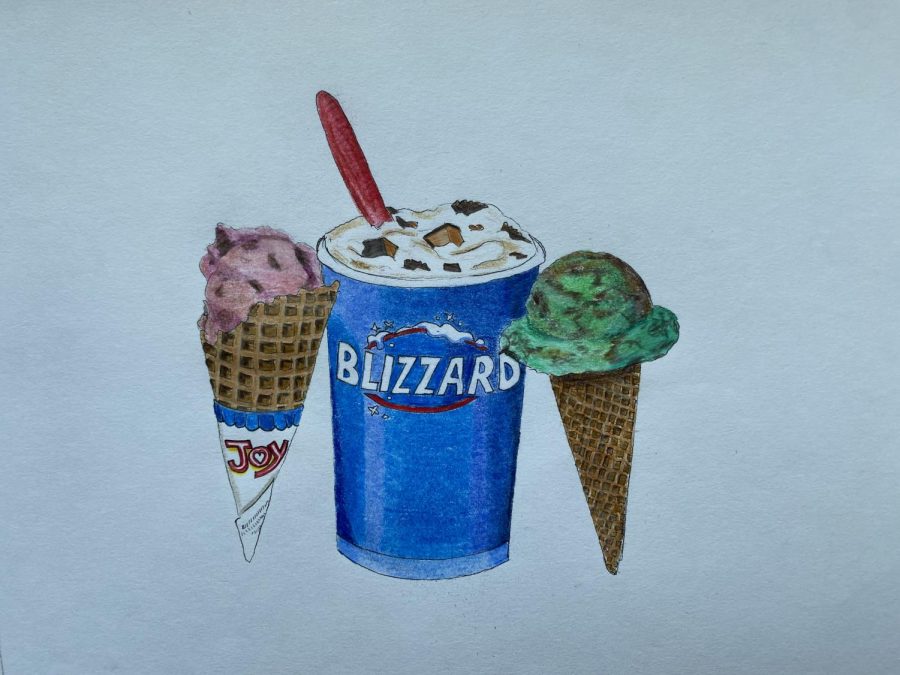 Ice cream is truly the best medicine. It is both healing and preventative, brightening a gloomy day and warding off a bad mood. Personally, I like to think I’m somewhat of an ice cream connoisseur. I eat it all the time: when I’m feeling good and bad, in sickness and in health. Honestly, I could eat it every day for the rest of my life, till death do us part. I even dabble with soft serve and frozen yogurt. With that said, I take my ice cream very seriously.

Originally, I planned on taking a note from Munchin with Michael to review the same flavour from a few popular ice cream destinations around Evanston. However, deciding what ice cream flavor to review was actually quite a taxing process—the flavour needed to be basic and widespread, but I just could not commit myself to an entire summer of eating chocolate and vanilla—and I realized the importance of diversifying my ice cream intake.  After my second single scoop of mint chocolate chip in a sugar cone, I realized that not only was the flavor already on its way to boring, but I also just could not come up with something new to say about it. In reality, they all pretty much taste the same (except for Mint Mackinac Island fudge at Hartigans, which will always be one of my favorites). In order to keep me motivated on my quest, I had to make a change and widen my repertoire. Although I hope I am not disappointing my predecessor, Michael, I give you not a review, but a reflection on a few of my favorite ice cream places on the North Shore.

I won’t lie, going to Dairy Queen is a trip and a half. Taking Lake in Wilmette all the way down to Loyola is no walk down the street to Hartigan’s, but is it worth it for a thick, cold blizzard or heaping pile of soft serve?

I think it is. At Dairy Queen, I ordered the Reese’s Blizzard and was met minutes later with a cup of heaven. The finely chopped Reese’s are the perfect compliment to the smooth vanilla soft serve. The ice cream was thick, rich, cold and incredibly satisfying.

Let me start with this: I am not a Northsider, and I was not raised on Hartigans. Some Northside legends do not stack up to their sizable reputation (cough, cough, Old Neighborhood Grill). Hartigans, on the other hand, is something different. From those 9 months old to 99 years old, Evanstonians flock to the small, friendly shop lit with Christmas lights on the corner of Central and Lincolnwood all throughout the summer, and for good reason. The Mint Mackinac Island Fudge at Hartigan’s is arguably one of the best flavours of ice cream ever created. With a base of mint ice cream and streaks of rich, dark chocolate fudge, Mint Mackinac Island Fudge is the more attractive, more athletic overachieving cousin of mint chocolate chip. As much as mint chocolate chip can try to compete, it will never outshine its golden boy cousin, who, by the way, just got into Harvard Law School. Immediately upon the first bite, I enjoyed a mouthful of smooth, refreshing mint ice cream, offset by the dark, fudgey streams of chocolate. The mint flavour was potent but not overpowering, and the ratio of chocolate to ice cream was nothing short of exceptional. The ice cream itself was the perfect temperature, not too cold but clearly right out of the freezer. I always have high hopes at Hartigan’s, and they rise even more when I order Mint Mackinac Island Fudge. Clearly, it did not disappoint.

I’ve been going to Homers since before I could walk. Although it’s in Wilmette, the warm, loud ice cream parlor filled with vintage posters and smiling patrons is a staple for New Trier Township and Evanstonians alike. One of the most important parts of the Homers’ charm is the experience; there’s always something going on there, someone you know or will soon meet sitting at the many tables. In that way, Homers is a 10/10, no question, but does the ice cream really stack up?

From Homers, I decided to get a single scoop of their classic Raspberry Chocolate Chip in a sugar cone. The ice cream was creamy and cold, exactly what you want when you order a scoop, and the raspberry flavor was sweet but not overbearing. However, if I didn’t know what I had ordered, I don’t think raspberry would’ve been my first guess since the ice cream tasted more sweet than tangy like many other fruit flavours. In every bite, the raspberry base was beautifully balanced with crunchy squares of semi-sweet chocolate. Overall, the ice cream at Homers is just as good as the experience itself. I never pass up an opportunity to make the trip down Green Bay to this ice cream mecca.