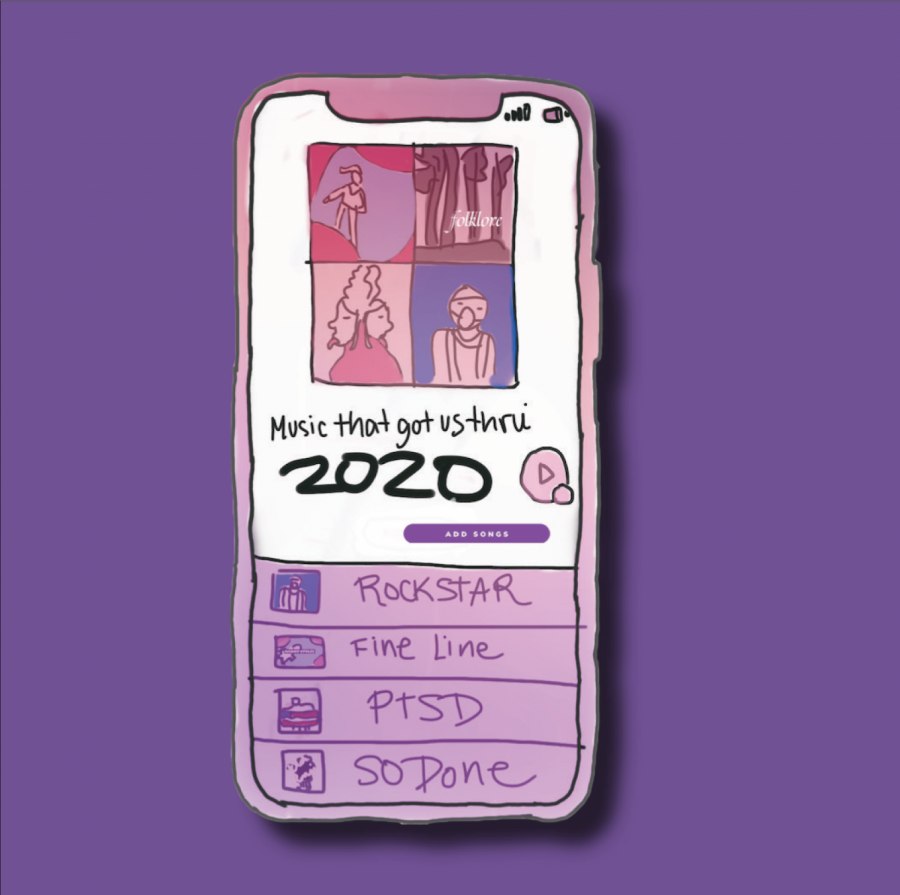 2020 has been a whirlwind of drama and emotions, but what’s a year without music?  Music has always gotten us through difficult times; 2020 is no different.  This year, as teens logged off of their online Zoom classes, they turned up the tunes and listened to artists such as DaBaby, Harry Styles and Taylor Swift to escape. Here’s a look into what music the students have used to help them get through this hectic year.

“I like it cause it has a very calm vibe to it, which is kind of an escape,” Chehab says.

Senior Lia Potter also has been listening to LAROI this year.

“I’ve been listening to the Score and the Iron Maiden,” Potter says. “I really like their style of music.”

One of the most notable releases of 2020 is “WAP” by Cardi B. featuring Megan Thee Stallion.  It has been awarded the American Music Award for Favorite Song Rap/Hip-hop and People’s Choice Award for Favorite Collaboration Song of 2020. In September, Rolling Stone announced that WAP had more than 39 million streams.

Although controversial, there is no denying the song has drawn a lot of attention especially through the app TikTok. The social media app has also been a platform that has spotlighted lesser known artists such as Conan Gray’s “Heather” and beabadoobee’s “Coffee.”  TikTok has made way for older artists such as Dolly Parton to make a comeback as their work becomes part of new trends and pop culture.

“There was another version put out that was connected to the Black Lives Matter Movement so it’s definitely related to what’s going on now,” sophomore Cullen Worth explains.

TikTok isn’t the only way students are consuming music. Students also shared they stayed loyal to the previous artists they had enjoyed in past years, such as Chance the Rapper.

Chance the Rapper collaborated with a variety of other artists this year including Justin Bieber and G. Herbo.

“PTSD,” released in February, is a collaboration with G. Herbo. Freshman Charlotte Murray  discovered Justin Bieber’s song “Holy” through her appreciation for Chance the Rapper.

Some artists, such as Harry Styles and Taylor Swift, have gained tremendous traction or even released full albums despite the chaos of 2020.

Although Harry Styles released his album Fine Line in 2019, songs such as “Golden,” “Adore You” and “Watermelon Sugar” are still regularly listened to in 2020. Styles’ music videos for this album were released in 2020, justifying his continued popularity. Most notably his “Watermelon Sugar” music video made major waves throughout the country and allowed the hit to become what Billboard celebrated as the “song of the summer.” Billboard also saw “Watermelon Sugar” reach number 1 on the charts on August 14, 2020 with over 1.34 billion streams by mid-August.

“The song is actually pretty sad. But in the end, trumpets start to play in the background. His lines are like, you’ll be alright. In a sense, it’s like a hopeful ending. I really like it.”  Rose says.

Rose looks for songs that are thought-provoking, mysterious, slow and sweet. She also pays attention to the lyrics and emotion in the artist’s composition and singing.

, “I think pop music can tend to be overplayed,” Potter says.

Despite her recent recognition as a pop artist, Taylor Swift also debuted her somber, mostly acoustic studio album, Folklore, amidst quarantines.  The unexpected album was released July 24 and received a great deal of attention and, according to Billboard, it became, “the first album to sell a million copies in the U.S. in 2020.”

“I think [Folklore] embodies 2020… and it is completely different from the rest of her music,” Murray says.

Usually, artists hint at an album or new music before the release, but, this July, ‘Swifties’ were in for a surprise.  According to freelance music writer, newsletter editor and fullstack developer Brady Gerber, Swift’s song “mirrorball” “has this kind of glow and haze. It feels really good before seven, which becomes very wistful and nostalgic.”

If you are looking for more missed hits from 2020, Rose suggests songs like “Mount Everest” by Labrinth, “Rhiannon” by Fleetwood Mac, “Japanese Denim” by Daniel Caesar, “The Chain” by Fleetwood Mac, “Fool’s Gold” by Niall Horan, “Silver Lining” by Mt. Joy and “1950” by King Princess. Other recommendations from students included “Cardigan” by Don Tolliver and Childish Gambino. .

This goes to show that preferred music for some is not for others. Music is unique in the sense that everyone can have their own preferences, and there is always more than enough to go around.  2020 music was released a year most unordinary, and without it, we wouldn’t have made it through the year.