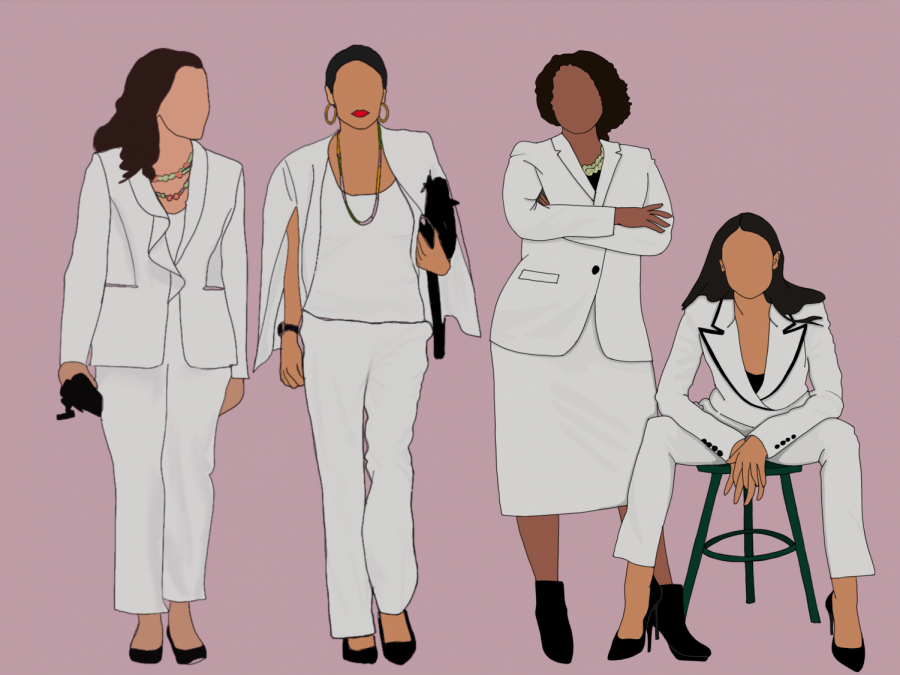 Every year for the Oscars, the Grammys, and award shows, millions of dollars and hundreds of hours are spent in preparation for the red carpet. The outfits are dissected and scrutinized by the media and the public alike, and celebrities, specifically women, are thrown directly into the public eye for the world to see. A similar phenomenon happens in politics on a more regular basis. Although it is often overlooked, female politicians are constantly in the spotlight on the same scale, and their looks and presentation are examined in a similar way.

This November, Kamala Harris became the first female, first Black and first South Asian vice president-elect. In her acceptance speech, she wore a sleek, white pantsuit with a

cream, satin blouse. Harris stepped out onto the stage with an incredible amount of pressure on her shoulders- she is now shouldering the great responsibility of representing both women and people of color in the highest office in the country. With this responsibility comes meticulous preparation with every outing and speech- including the choice of the white suit she wore to accept the position.

White, purple and golds were the official colors of the suffragist movement and the National Woman’s Party, in which white symbolises “the emblem of purity, symbolizes the quality of our purpose.” For Harris, wearing white has an even broader message. Not only is she representing the suffragettes, but also the women of color who were not included in their original campaign, or the 19th Amendment in which white women were granted the right to vote. In 2016, Hillary Clinton became the first woman to ever become the presidential nominee for a major political party in an American election. She also wore a striking, white pantsuit in her acceptance of the nomination.

However, Clinton and Harris were not the first to use this choice of wardrobe to further the message of the suffragettes. Speaker of the House Nancy Pelosi wore a white pantsuit to announce that the House of Representatives would begin drafting Trump’s impeachment articles. The Democratic women of the 116th Congress all wore white during Trump’s State of the Union Address in 2019. In 1984, Geraldine Ferraro wore white to the DNC to accept her nomination as the first female candidate for vice president.

Clinton’s stylists and campaign workers leveraged the popularity of the white pantsuit to their advantage, making it a symbol in her campaign of power and femininity. Although style and presentation have previously been seen as a way to push female intelligence to the side, contemporary politicians are using it as a tool to cultivate power and political strategy.

“I really admire [AOC], and I admire her way of being more personable,” says Junior Eva Epley. “I wouldn’t say I would necessarily copy her style, but the way she presents herself, in and out of the workplace makes her a lot more personable, and I think that also has to do with her style.”

Congresswoman Alexandria Ocasio Cortez is known for many things: her work on the Green New Deal, her connection with her constituents, and her progressive energy. Not only are her policies progressive though, but so is her wardrobe, including a plethora of brightly colored blazers, dresses, and pantsuits, as well as hoop earrings and her classic red lipstick.

“If they have a more youthful presentation, it can attract a different demographic of voters. For example, Hillary was always famous for her pantsuits, so that’s maybe an older style,” says Epley.

The white pantsuit Clinton wore in her acceptance speech became a trademark of her political presence. The suit was seen over and over in pivotal points of Clinton’s campaign, including the third and final presidential debate and the inauguration of President Trump. For Clinton, the style was used as a tool to gain attention and support. However, not all wardrobe choices have that effect.

“In our modern-day society, a lot of styles for businesswomen that are more revealing definitely hinder them. Even the way AOC dresses, or if she dresses more casually, that definitely gets her some criticism from specifically the right [wing].”

“I was watching myself being exposed to the world, and I had to become strategic about how I presented myself because it had the potential to define me for the rest of my life,” Obama said in her documentary, Becoming. “Fashion for a woman predominates how people view you. That’s not fair, that’s not right but it’s true. That’s when fashion isn’t just fashion, it’s how you turn it into your tool rather than being a victim of it.”

Style can be an important way for candidates to build a connection with their constituents. In the words of Vanessa Friedman of the New York Times, “Most of us don’t have to decide on sanctions against Syria, or whether to try to reinstate the Glass-Steagall Act, but we all have to get dressed in the morning. That’s the sweet spot where public politicians and private persons meet.”

Presentation in politics, which continues to be a male-dominated field, has never been of the importance that it is now when female candidates have to deal with the “likeability trap.”

The “likeability trap” is the phenomenon in which, “women who behave in authoritative ways risk being deemed difficult, brusque or bossy, while those who are too nice risk having their competence questioned,” according to the New York Times. This trap is a factor for women in every area of the workplace, but it is especially apparent in politics. Female politicians are expected to be qualified, authoritative and respectable, while also being, nurturing, collaborative and of course, feminine. Male leaders, on the other hand, are not held to the same standards, and their “likeability” is rarely in question. Research by the Barbara Lee Family Foundation has found that voters hold female candidates to a higher standard, even after acknowledging the disparity in standards. The same institute also found that voters will support a male candidate they do not like but who they consider being qualified.

In the case of Hillary, her presentation was of the utmost importance when facing Donald Trump who did not hold back with comments about her looks. Throughout Clinton’s candidacy, the media dived deeply into all aspects of her life. In 2016, Friedman published an article in which she wrote, “Over the months until the general election (and perhaps beyond), she will be scrutinized in evermore exacting detail, not just for her economic platform and her emails, but also for her body language, her eating habits, her relationships. And, yes, her clothes.”

Not only are female candidates’ personalities being dissected, but so are their looks, presentation, and style. Women have had to create a look that balances business with femininity, which historically does not go together due to the male-dominant nature of both business and politics. One example of this is the popularity of pantsuits, which model after the classic suit worn by businessmen and male politicians but allow for women to find femininity in a male-dominated field.

“I think honestly, women are going to receive criticism on everything they do, purely from misogyny,” says Epley. “In professions that are more male-dominated, I think [style] creates an emphasis that women are still allowed to express themselves and be feminine without losing their personality or losing their smarts because it’s not just one or the other.”

As women become more prominent and respected members of Washington and beyond, their wardrobe continues to be a point of conversation, scrutiny and growth. Our style is our mindset, our goals, and our voice- and this is true for politicians too. So in the words of Michelle Obama, “let’s embrace the fact people are looking at my shoes and not just highlight me and the clothes but who we wanted to be as an administration — forward-thinking, embracing youth, embracing diversity.”