Why fanny packs are a concert essential 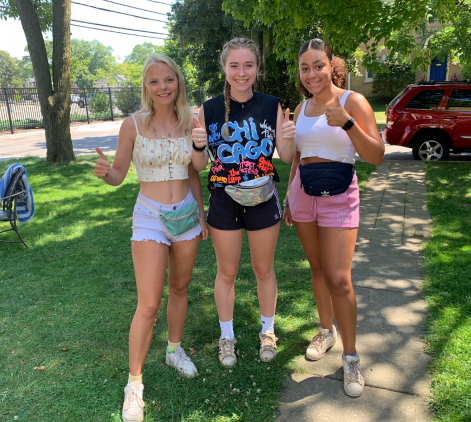 Fanny packs have enhanced the concert experience for the better. Within the past few months, they’re becoming increasingly common.

Popular brands have taken the trend to their advantage, making them fashionable for our generation. Mainstream brands such as Champion, Nike and Adidas along with designer brands Gucci, Louis Vitton and Supreme all have created their own fanny packs.

“Bags and handbags have been closely associated with women in the past but recently people have started to realize that they are not for just one group of people,” senior Chuy Rojas says.

A huge plus is not only that they come in many colors and styles, but that they are useful in many ways, especially at concerts.

Fanny packs are commonly worn in two ways: on your waist or across your chest. Wear it in front of you or over your back; it’ll always be a hands-free bag. Almost all venues don’t allow large purses and backpacks. Not everyone enjoys holding a wristlet or drawstring bag, and these options offer little space for items. People then have to pack as little as possible. Fanny packs may seem small, but they are useful to keep the basics: phone, wallet, cash and some other small items. They can be used as camera bags for audio and visual equipment as well.

During shows, people want to take in every moment. Whether it’s dancing or moshing, people will not have to worry about dropping their phones or checking every five seconds for their cash. Fanny packs also give easy access to take out phones to record. The trend made an appearance at Chicago’s Lollapalooza over the summer. While the festival had restrictions such as no large backpacks or purses, they did, however, approve fanny packs along with camel backs and drawstrings.

“A lot of people wore shoulder bags and fanny packs [to Lollapalooza], because nobody likes to lose their phone, wallet and important things,” junior Alex Pelaez said. “Having a smaller bag is nicer instead of a big bag.”

If people are going out for a stroll, hanging out with friends or going to a concert, a fanny pack is a convenient, stylish way to carry belongings.