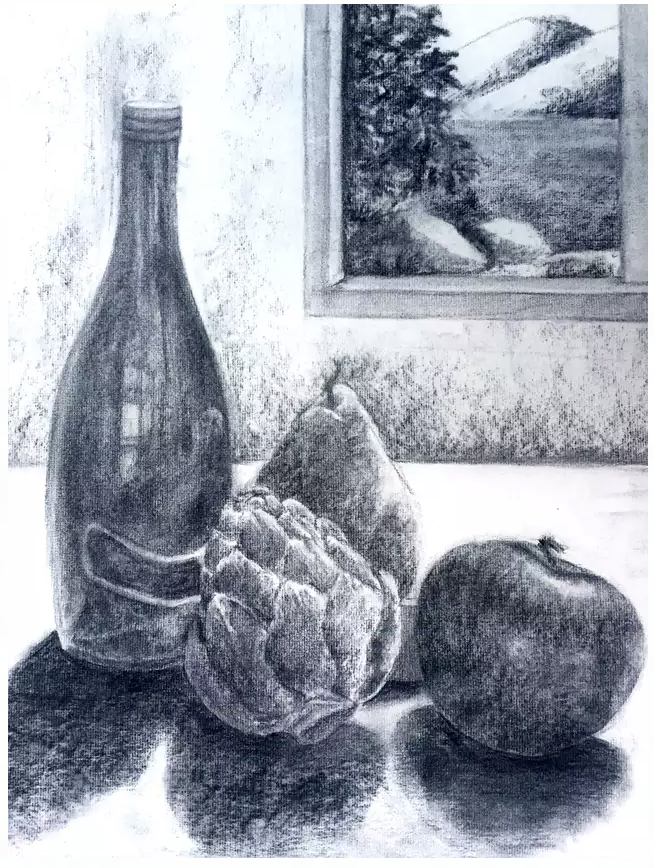 Jasmin Hislop, the coordinator of the South Technology Center, also happens to be a talented artist. Recently, Hislop displayed her art at the Evanston Public Library and is planning a future exhibit in April.

“I can’t tell you when [art] began it was just always there,” Hislop says.

For Hislop, art is something that has always been around. There was not a specific time that she started creating art.  She says that culture is important in her day-to-day life. She incorporates her culture within her art.

“You don’t know or understand your culture until you’re not a part of it. So since I’m here [the United States], my culture has become more visible to me. It’s become something that I interact with more, and I’m more conscious of it,” Hislop says.

Trinidad and Tobago is where Hislop learned a lot about art; she mostly used batik [type of fabric] for fabric work, pencil drawing and acrylic painting Recently, most of her artwork has been semi-abstract/abstract.

When she immigrated to the United States, she began to interact with technology. She incorporates what she learned from both of her cultures into her art she has displayed in her exhibition, A Nowherian Signature.

Her exhibition was showcased at the Evanston Public Library back in November. She showcased multiple works. As a matter of fact, while showcasing her artwork, she met someone who was taking a trip to Hislop’s homeland: Trinidad. Through her art, Hislop wants people to get to know her including her faith and spiritual journey.

“That’s why you have A Nowherian Signature because it doesn’t really sit on one particular approach. It kind of pulls all the different things and kind of mixes and matches and experiments,” Hislop says.

She recalls asking one of her art teachers, “what’s his favorite piece of work he’s ever done, and he told me that’s like asking which one of your kids is your favorite child? You don’t have a real favorite — they’re all your children — and that I never forgot.”

Although she doesn’t have a favorite piece, she has a piece she finds interesting. “Still Life With An Artichoke” is a still life she created while she was taking an art class about 20 years ago. The reason why she still finds it so fascinating is because her daughter noticed something in that art piece that Hislop never noticed. In the art piece, her daughter noticed an old man sitting next to a window.

At first, Hislop didn’t know what her daughter was talking about, but once her daughter pointed the man out, Hislop saw it. The piece was up on display, and it stirred up discussion on whether the person was an old woman or man. Hislop found it interesting how that elderly person who she never saw in her own art was the focus point of the piece. Hislop recalls thinking she was just doing an assignment.

“I was doing pastel work, and I wasn’t finished and left, went to go do something else, and came back and [she] took green and blue and scrolled all over it. When I showed the rest of my family, everybody was like ‘Ooo’ because they thought the piece was ruined,” Hislop says.

Hislop recalls how her daughter would stay awake in class by “doing her own little doodling. And as a result, she would create a ton of stuff.”

Hislop used her artistic eye to take Alyssa’s work, pull images out and incorporate them into a combined product to ultimately show Alyssa how talented she is. Later on, they would continue to create artistic pieces together.

From her journey beginning in Trinidad and Tobago, then arriving to the United States, Hislop is a talented artist who wants people to get to know her through the art she creates.

Her next showcase is April 21 at Gibbs- Morrison Cultural Center.