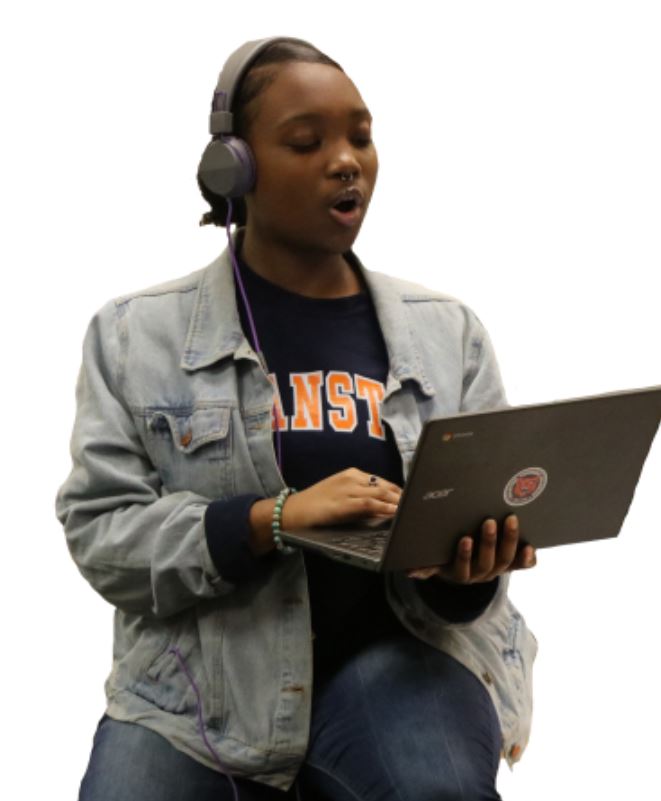 An activity famously associated with the Chicago poetry competition, Louder Than A Bomb, spoken word can be found all around the Chicagoland area, even at ETHS.

ETHS’s Spoken Word team aims to utilize club meetings to elaborate on personal experiences and to collaborate on competitive pieces.

The club selects 10 poets for a competition team at the start of the year, but the club is open to anyone looking to strengthen their poems throughout the year. After auditions, there is a heavier focus on the poems of those who make the team, so the pieces can be ready to be performed at competitions. A misconception surrounding Louder Than A Bomb is that poets must associate with a team or group to perform. In reality, anyone can compete at  Louder Than a Bomb as an “indy” performer, someone who flies solo.

“[Competing] is really fun, because you get up on the stage and read your poem and people snap and say ‘mmm yes!’ It feels really good,”  junior Corbin Kimrey explains.

Competitions, also known as bouts, are held through Louder Than A Bomb and pickup between Feb. 20 to March 2.

In addition to the club being inclusive to members’ identities, the team has been to mini competitions such as Queerosity, Halal If You Hear Me and Louder Than A Lawn Mower, which let authors share their experiences with their identities specific to the LGBTQIA+ community, race and region in Chicago.

“At every competition, they will tell you it’s not about the points, it’s about the poetry, but nobody really listens to that,” senior Devea William says.

While the club members are close, tensions are high among Chicago competitors and poets from the suburbs. Members note that Chicago teams are infamous for looking down on suburban students because of their privilege in wealth and opportunity.

“There is a stigma, because Chicago kids feel like since Evanston is so upper-middle-class; there is no way we could have felt what they have felt,” sophomore Jahnese Adams says.

Even though competitions are described as cutthroat, the team diligently works on their four individual pieces and two group pieces together. The team is open to new ideas and even collaborates outside of scheduled practices.

“In the beginning, we were a little behind, but we got to know each other a lot better. And, we were able to work harder on a piece. We’ve tried working from home on a Google Doc, but it’s not the same as just being in front of the person and communicating,” sophomore Indira Abraham says.

Later in the year, the competition team kicks off poetry week at ETHS by performing during the last three periods of the day with solo and group performances. Besides poetry week, there have been open mic events in the past members note as less nerve-racking.

“My favorite part of being on the team is after we do competitions, there is not as much stress, and we are able to perform to a group of people we know as well as around the community,” Adams explains.

Although collaborating on group pieces can come with a multitude of compromises, the team has created a warm and welcoming atmosphere.

“Of all the clubs I’ve joined, this one is more like a family. I really get along with everyone,” Abraham explains. “There are a lot of fun times. One that stuck with me is when we met each other before we tried out. Everyone was in a classroom, and we were just getting to know each other. It was so cool to see everyone’s presence on stage.”

Getting recognized for hard work is a great bonus, but the real accomplishment is the bravery members show through their commitment to contribute to the community. Through and through, the team stays passionate about poetry, competition or not.