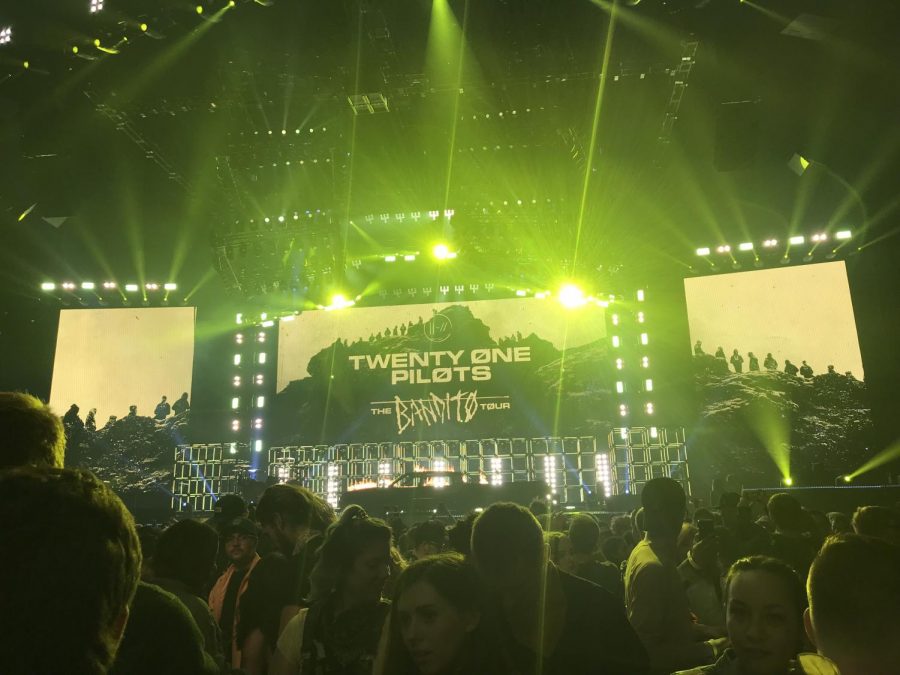 Twenty One Pilots concert at the United Center on Oct. 17.

Twenty One Pilot made its way back on the chart with the release of their new album, Trench after a two year tour and a year long hiatus.

Previously, Twenty One Pilots released Blurryface in May 2015 which had songs “Stressed Out” and “Ride” hit major pop radio stations. After these releases, the band went on a world tour and released another break out song, “Heathens”.

Trench came out this October and was worth the wait. The band put in a lot of time and effort into the making of this album. Trench was produced by the vocalist, Tyler Joseph, along with Paul Meany from the band Mute Math. Mute Math has opened up for Twenty One Pilots before. With Joseph and Meany, producing the album, it gave it a more intimate feel. Their first four singles, which were released before the album between July and October, received amazing feedback from critics and fans. The songs “Jumpsuit,” “Nico And The Niners” and “Levitate” are part of the singles that were released before the album. These songs, while having a similar style of music to previously released album Blurryface.

The band also produced music videos to go along with each of these three songs. Within each music video, there is a storyline that many have yet to figure out. “My Blood” was also released as part of the four singles, but wasn’t a part of the music video series.

The full length album came out on Oct. 5 and is hands-down one of the best albums fans have seen from the band. Each song of the album is well written and very personal. The song “Legend” is about the recent passing of Joseph’s grandfather, who was a huge influence on his life. In fact, he was so influential on him that he, Joseph’s grandpa, appears on the Vessel album cover on the right side. Even in interviews with Joseph, he has stated the huge amount of respect, he holds for his grandpa and the amazing relationship he had with him.

The album also goes over the insane amount of growth the band has made in recent years. In “My Blood” one of the lyrics “stay with me my blood you don’t need to run,” and “Leave the City”  the lyric “last year I needed a change of pace, couldn’t take the pace of change. But this year though I’m far from home, in trench I’m not alone,” explains the fast growth and popularity of Twenty One Pilots. They went from playing in front of a couple hundred people to playing in front of 20,000 people: a huge change in a matter of three years.

Twenty One Pilots has continuously impressed fans with their new content and leave fans with incredible content which was well worth the wait. With their sold out shows and great feedback on the new album, the band has already announced dates for 2019. Hopefully they will make a return back to Chicago next year.

For more on the album check out http://smgviews.com/we-are-banditos/