Students reflect on pop-culture trends over the years 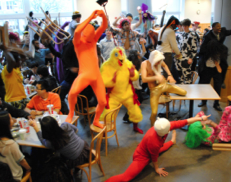 The Harlem Shake sent students across the country into a dance craze.

Over the years, crazes from dabbing to the Ice Bucket Challenge have shaped the way the senior class has viewed their high school experience. Trends, often stemming from the Internet, reach a wide range of categories from dances, viral videos, TV shows, and more.

From the rapid growth of streaming services such as Spotify and Apple Music to the fall of cable television, the last four years have brought many changes in the ways we absorb and appreciate media. When Netflix entered into the original series world in 2013, students and subscribers alike tuned in for hours to binge their favorite TV shows.

Although some trends like Pokemon GO and Vine didn’t stick around for long, others have stayed with the students since the beginning. Here are some of the most memorable trends that have surfaced over the last four years.
2013-2014: Harlem Shake
This dance set chaos to the tune of Baauer’s 2013 novelty hit Harlem Shake. Whether or not you thought the song was good, everyone remembers the month-long obsession with random dancing.
2013-2014: Frozen
Frozen brought Disney to the highest level of success ever for an animated movie, earning over $1.2 billion in the box office and millions more through toy and soundtrack sales. Though it is a kids movie, Frozen will be remembered by teens and adults for many years to come.
2014-2015: The Dress
This internet puzzle debuted on Buzzfeed and instantly had people questioning the quality of their own eyes, and arguing with others for days over the essential question: is “the Dress” white and gold or black and blue?
2014-2015: Ice Bucket Challenge
This challenge, organized by the ALS Association, involved taking a video of ice water being dumped over one’s head to raise awareness for ALS. This challenge brought philanthropy to social media as millions took to the web. Instagram, Facebook, and Vine videos raised over 15 million dollars for the Association.
2015-2016: Hello
After taking a four year hiatus to raise her son, Adele released the Grammy-winning album 25 in 2015. “Hello” debuted at #1 on Billboard’s Hot 100, and stayed there for over 10 weeks.
2015-2016: The “Dab”
This dancing trend, popularized by quarterback Cam Newton and Migos, became habitual in teen conversation. Famous faces like Hillary Clinton have caught on to the dance, along with millions of fifth graders.
2015-2016: Hoverboards
Seemingly overnight, hoverboards became must-have technology for teens in 2015. Unfortunately, this hot trend got too hot- literally! Though a beloved gift for kids across the world, parents were deterred from buying the product due to its tendency to explode.
2016-2017: 13 Reasons Why
This 2017 hit Netflix show follows one girl, and the 13 reasons why she killed herself. The show’s content has met widespread controversy due to its mature themes and graphic nature
2016-2017: Bernie Sanders
This Democratic Socialist presidential candidate took the country by storm in the 2016 election, mobilizing young voters. Sanders’ ideas of legalized marijuana and free college tuition turned him into an internet favorite.
2016-2017: Hamilton
Hamilton brought Broadway into the mainstream when the show hit the stage in 2016. The show’s vision of history and hip-hop attracted a larger audience than almost any other Broadway production has, and tickets currently sell for over 500 dollars.