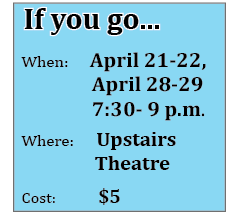 Although most people associate Jesus with church, students will see another side of the religious figure in the upcoming production of Jesus Christ Superstar. Taking place on April 21, the broadway rock show will provide a humorous twist to the story of Jesus.

The story is last told from the perspective of Judas, a former disciple of Jesus, and focuses in on the last seven days before Jesus’ Crucifixion. Following biblical relationships and humorous themes that are not known to the mainstream.

Due to the title and the fact that it focuses in on a religious topic, there is some controversy that surrounds the play. According to the cast, there is no need to worry.

“The show never mentions religion at all, nor is there a practice of religion shown onstage,” says senior Gaby Godinez, playing Mary Magdalene. “This musical is about Jesus the man, not the religious figure. The whole show is about humanizing this story and not making it all about religion.”

Though the title may seem to mention religion, the show, instead, does not mock Jesus and depicts him as a normal man who goes through the pitfall of sudden fame and fortune. According to the cast, the broadway rock music score is what makes this truly memorable.

“It’s a rock musical so all the songs are crazy heavy with electric guitar and bass,” Marta Bady, a junior who plays Judas, says. “There are also songs that sound more like ballads and utilize the full string orchestra which is absolutely beautiful.”

Although a quite challenging soundtrack, the cast members are handling it well and reaching up to the standards. Bringing a show to life, however, also includes the costumes as well.

“While some production use more modern costumes to show the difference between what the play is about and the time period that it takes place in, this is not the case for Jesus Christ Superstar,” says junior Ben Ballmer, who plays Jesus. “Your biblical robes, sandals, and so forth are going to be utilized during this play.”

This production is filled to the brim with entertainment value, whether it be in the challenging broadway rock music score to the dancing to the costumes themselves. Although some people find the play offensive, the premise of the show is not. Following Jesus as a regular man rather than a religious figure, any and all audiences can enjoy this production.