Step team practices their moves for competition and pep rally 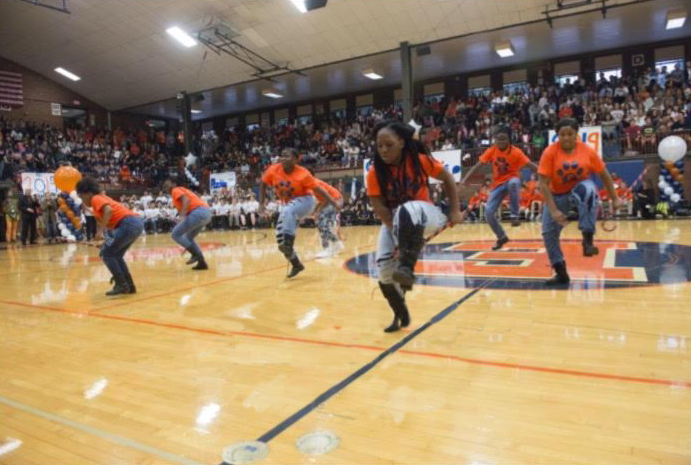 E-Squad is a word almost any Wildkit knows. The step team has been working for hard this year’s for performances as well regionals in April.

“What we’ve done is continued the tradition,” Michelle Lyle, one of E-squad’s coaches says.

The ETHS step-team dates back to 1997. ETHS continued to keep E-squad prevalent, incorporating Caribbean and ethnic beats into the stepping.

On April 8, E-Squad will compete in the Illinois Regional High School Stepping Championship at Thornton Township High School from 2 p.m. to 8 p.m. Tickets will cost $10.

The choreography comes from students and E-squad coaches. When it comes to choreography, there is an equal input from both coaches and students.

The club runs on Thursdays and Fridays and isn’t just dancing. Lyle says that the practices start with a cardio warm-up before working on the dance routines. The team breaks up into different sections to teach the numbers. There is equal input on the choreography from coaches and students. When nearing competitions, they try to practice every day.

The team has already performed in various locations this year. Recently, they have performed at the Levy Center, as well as Fleetwood Jordan. Currently they are practicing for an upcoming competition at Lyons High School on March 25.

The team loves performing at pep rallies, but another big part of step team is the annual Stomp Down, which is hosted by the Delta Sorority and is the one time of year the E-squad steps on home ground.

The members of the E-squad have bonded over their common love of dancing.

“We are very close, we have a group chat. We hangout after school and do homework together too,” Christopher Morris, senior says.

Beside that, E-squad has celebrated holidays together in the past.

In 2014, E-squad gained second place, which was a huge achievement for the steppers. “From there, it has filled so much empowerment in the steppers. We’ve took flight from that moment,” Lyle says.

There is much time to see E-squad perform, at both the pep rallies and the 2017 Illinois High School Stepping Championship.