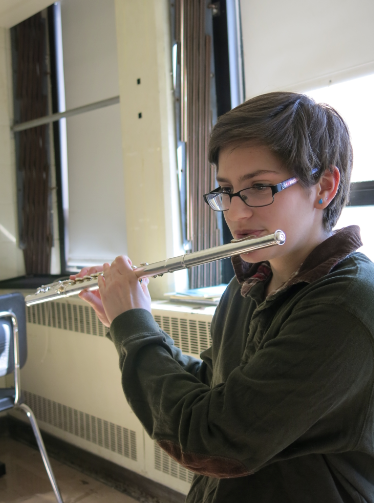 When people think of band, they usually imagine a large group of students, but the Solo and Ensemble festival breaks this mold.

“This is an opportunity to develop the individual musician and provide an outlet for that side of music at ETHS,” Band Director Matthew Bufis says.

Taking place on Mar. 21 at ETHS, individuals who have worked hard all year are able to step outside of their musical comfort zones.

“Solo and Ensemble is a more intimate performance. Playing in a smaller group allows you to have more control of the music outcome and the unity of the group,” junior Gabby Pope says. “It is harder to stay together the more people you have, so this is perfect.”

The judge, also known as the adjudicator, rates each individual on a scale from 1 to 5, with 1 being the highest. The students are also given a verbal critique, which enables individuals who would not normally have an opportunity to perform a solo piece an unbiased opinion on their end.

“I have been working on a few other pieces through the new year, but I wanted to do a new one for solo and ensemble, so I just started working on a piece named Air Varie,” junior Olivia O’Brien says. “I’ve been practicing every day for the last couple of weeks in order to get ready.”

Having about two weeks to prepare their pieces, various band students are working their hardest in order to be ready for the competition. Unlike other band performances, this one truly focuses on each individual’s person ability rather than one of a collective group.

“The program has been consistently growing over the past few years and I hope this trend will continue,” says Bufis. “It creates a new show and group of talented musicians.”