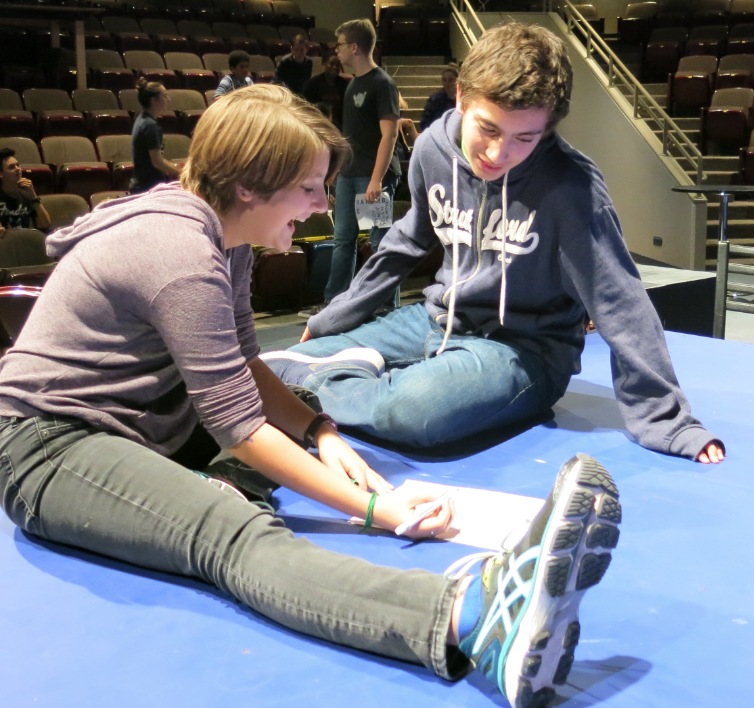 The cast of YAMO rehearse for their upcoming production

Although some people find plays to be boring, this is simply not the case for this years YAMO fall production of Goodnight YAMO.

“The show this year follows a young girl named Jackie who always dreamed of going to see YAMO,” senior Gaby Godinez, musical director says. “She isn’t able to attend this year’s show, so when she falls asleep, she dreams that she is in YAMO herself.”

Unlike previous years, this production stands out with all of its various settings. Due to the plot being based around a dream, things do not always go according to plan. The music and lyrics for the opening, closing, and segue scenes are all written by members of the orchestra board, giving it a unique spin on the production.

“The music is hugely influenced by current culture,” junior Sam Bailey says. “There’s a lot of musical theatre inspired by music as well.”

From pop songs to ballads, this production covers it all. With a cast and crew more talented than ever, this student crafted show brings an edge. The set is handmade as well, incorporating the artwork of various students and crew members.

“The set is a take on the night sky, with a deep blue background and stars painted on it,” senior Graham Byrnes, General Director says. “It’s got an arch and a trapdoor that we plan on utilizing extensively.”

With YAMO being completely crafted by students in all aspects, whether it be music to sets to the script, this program allows for actors to break out of their shells and take on leadership roles in a unique way.

The only aspect of this production that is not crafted exclusively by students are the costumes, covering a variety of looks and time eras.

“The costumes vary from safety officers to futuristic pop stars to our political leaders,” senior Godinez says. “There are all different kinds of sketches, from a Dr. Seuss scene to a scene of updated children’s stories to parodies of famous songs from musicals.”

When a student purchases their ticket they are not just going to a generic production. This unique, student crafted dream of a girl named Jackie is something few can beat. Tickets for this production can be purchased for $12 and it’s definitely something dreamers wouldn’t want to miss.