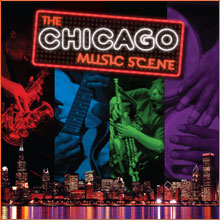 On Oct. 28, Halsey played a sold-out show at the Vic in the northern part of Chicago.

The room is packed, every crevice filled by a person surrounding the small stage, which is sparsely decorated but for a few box-shaped columns with screens that glow with surreal graphics to accompany the rhythm of the bass.

“There’s some enthusiastic people in this city,” she says to the sea of fans, eliciting a collective scream that showcases that aforementioned enthusiasm, “giving me the liberty of playing two nights.”

She holds up two fingers as proof.

“Now that, my friends, is a privilege that is usually reserved for cities for Los Angeles and New York, but you guys said nah, [screw] that.” More screams sound.

Chicago sometimes gets lost in the frenzy of the attention-garnering cities of the coasts. We float, among plains and cornfields, in the middle ground between the East and West, forgotten by the planes that fly coast to coast over our heads.

Big artists play big venues, so naturally they flock to the household names– Madison Square Garden, the Forum, Radio City Music Hall, the House of Blues Hollywood– which reside on the outer edges of the country. The land between is rather disregarded– I can’t say how many times I’ve wished that I lived in New York because my favorite artist was playing a special show there.

It becomes an issue especially for global acts, who focus on the more populated and really, more famous, locations in the United States. Why travel the extra miles to the middle of nowhere when you can just hit up the Big Apple?

Chicago is shrouded by its location, eclipsed by the midwest– but it is not as unassuming as it seems.

Chicago has always taken a lot pride in its reputation as the birthplace of blues, which can be attributed almost entirely to the great influx of black workers during the Great Migration. It continues to be influential in that genre today, especially in its branches in hip-hop and rap, which have produced big names like Kanye West and Chance the Rapper, but where it lacks recognition is in its contributions to rock and alternative music.

An independent music scene was cultivated in the ‘80s, producing punk legends like Patti Smith and the Effigies in the city, which eventually gave way to a rise in alternative rock in the ‘90s. Bands like Veruca Salt and Smashing Pumpkins gained popularity in this wave, along with emerging rock heroine Liz Phair, whose blunt lyrics and deadpan voice quality led a pack of candidly brazen artists into the public eye. This surge was augmented further by the ascension of alternative icons like Eddie Vedder of Pearl Jam and Kim Thayil of Soundgarden.

The contemporary Chicago music scene is alive and well, with emblematic groups like Wilco and Fall Out Boy, and supplemented by a strong alternative underground, but even with this consistent contribution to the industry, Chicago is overlooked.

Lollapalooza has certainly garnered notoriety for the city and its music, and everyone is glued to their computers when the now-four-day passes go on sale, but the festival only brings people to the city for music-related reasons once a year. Pitchfork and Riot Fest also make valiant efforts, but are ultimately overshadowed by more prominent festivals like Coachella and SXSW.

Yet, even with an overlooked past and a slight exclusion from the popular pack, Chicago is rising.

“This is one of my favorites cities to play,” Halsey said later in the show. “Chicago has shown me nothing but love.” She played a co-headlining show at the Park West back in March and made it onto the Lolla setlist this past summer.

“Chicago is becoming a relevant part of my life,” she reflects in an earlier interview. “We’re doing two nights at the Vic in Chicago…Chicago really came out this year as a big city.”

Halsey’s words are well-appreciated, but I’m referencing our rich history when I say: we already were.