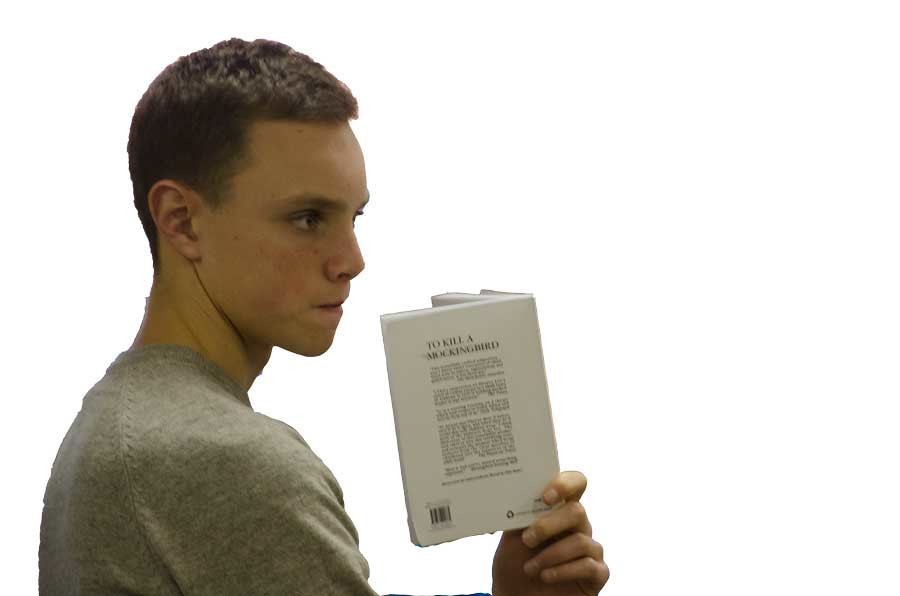 The classic novel has been taught in schools for decades, you may have even read it in your sophomore english class, or seen the film starring Gregory Peck. Now, you can experience To Kill a Mockingbird in a whole new way, starting Dec. 10 in the Upstairs Theatre.

Aaron Carney, Stagecraft teacher and the show’s director, says that while the overall plot of the play stays true to the novel, the ETHS stage production will bring several new changes to the story.

“Our play will feel less like a memory, and more like something new that is currently unfolding in front of the audience; while the novel has a much more reflective feeling,” says Carney, “Our adaptation allows audience members to connect with the characters and

plot of the story on a deeper level than is possible when reading of the events.”

When reading a story such as To Kill a Mockingbird, the reader is given a chance to imagine the setting of the story as he/she pleases, however when viewing a play, the task of setting the show is left entirely to the crew of the production. According to Carney, the play will feature an ambiguous set consisting of platforms and stairs, representing various things, such as porches or the courtroom. Carney adds that lighting changes will play a major role in showing setting and the passing of time in the play.

The play will not only allow audience members to visualize the events of the story, it will provide an entirely new perspective on the events of the novel. The story, originally written as a novel in 1960 by Harper Lee, tells a tale of racial prejudice, social injustice and self identification. The original text version of the story is told from the perspective of a grown of version of the main character of the story, Scout, while the stage adaptation will be told from the perspective of Miss Maudie, the elderly neighbor of Scout’s family. This change of narration to the story is not the only change being added to the plot, the story of To Kill a Mockingbird unfolds over the course of one summer in the play, compared to the three year span that is filled in the novel. In addition to change of timeline, the play allows for a much wider array of characters.

“The novel features around 10 main characters, with somewhere around 30 supporting characters, but the play has 18 significant roles written into the script,” says Carney “This allows for the story to be played out in the most in depth fashion as possible on stage.”

Carney adds that the ability to cast a large number of roles in the show (23 additional cast members make up the ensemble for the show) made the play an obvious choice to be performed, in addition to the show’s relevancy with the curriculum of English classes at the school.

Gavin Farrow, senior, read the novel as a part of his sophomore English class, and will be playing the role of Atticus Finch in the stage production. The show will be Farrow’s twelfth performance at ETHS, a list that includes a variety of shows, such as YAMO, Writer’s Showcase and North Star. Despite his experience in the theatre, Farrow claims that attempting to recreate the classic novel on stage has been his biggest challenge to date.

“One of the great things about the novel is the amount of subtext and deep content that still comes comes off so effortlessly in the text,” says Gavin. “Getting that same sense to be felt on stage is not an easy thing to do. We have had to spend time reading and re-reading both the novel and the script in order to understand the underlying characteristics to play in the characters, however we must still let the dialogue display the message of the play, rather than our physical showing of the characters. It’s one of the main challenges of this performance, trying to remain independent from the text when most of the dialogue is taken directly from it.”

The cast of To Kill a Mockingbird has a tough task in attempting to retell one of the most famous novels in American history; but the story will come to life, thanks to an artfully designed stage and an increased understanding of the plot, characters and themes of the story.