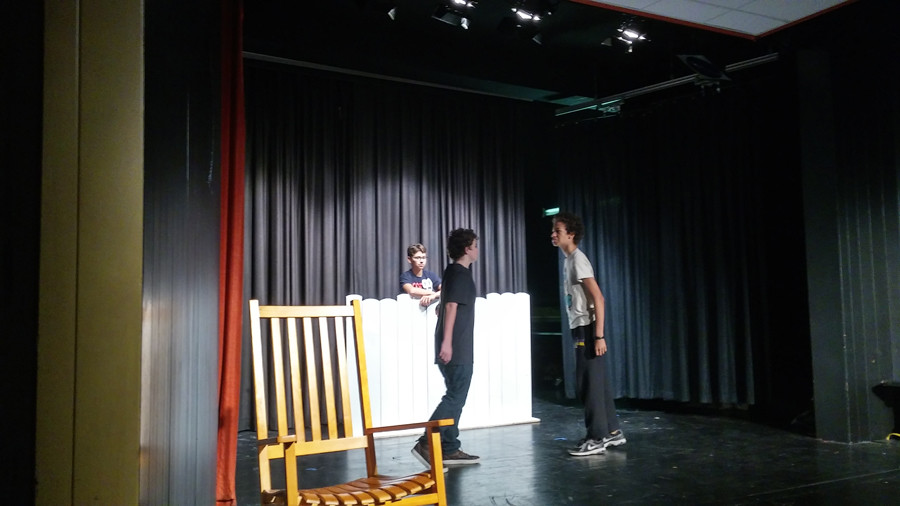 The cast hopes to bring a mix of skill, focus and commitment that is not often found among actors so young.
“All of my casts so far have been wonderful,” says director Anne Lefkovitz, now in her sixth year. “This cast is probably the most committed I’ve ever had.”
In order to ensure a great show the cast and crew, along with junior student assistant director Marjie Erickson, have been working tirelessly to get their lines, stage cues and equipment cues memorized.
Sophomore Grey Turley has the title role of Tom, while sophomores Ian McCall and Meredith Byrnes play Huck Finn and Aunt Polly.
The cast is putting emphasis on staying true to the original work by Mark Twain, while still maintaining a level of artistic freedom. The cast kept all of the names on stage the same as they appear in the book. One exception to this ruke us the character “Injun Joe” whose name has changed to “Old Joe”.
As with most live performances, preparing for the show has not been a walk in the park.
“The accent is definitely what I had the most trouble with when we started,” says sophomore Meredith Byrnes. “I’ve almost mastered it by now though.”
Sophomore Naama Friedman has the dual roles of Rev. Sprague and Judge Thatcher. She’s learning variations because those two characters don’t sound the same.
Tom Sawyer, first published in 1876, is a coming of age story about a young boy’s transition into a young man. It was first performed at ETHS in 2001. It was originally performed as a Broadway musical, and, since its’ release, has been performed over 7000 times all over the country.