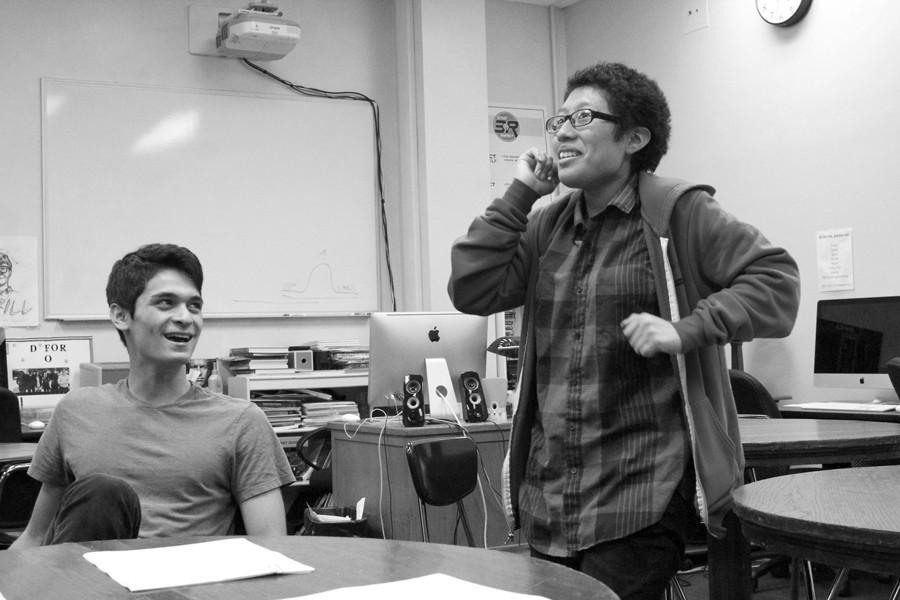 Everybody loves movies, but few can claim to have created one.
The ETHS Film Club recently began the creation process of several short films, all from the minds of students.
“These projects are entirely student driven. Mr. Zoccoli and I are simply here to guide them,” says Darlene Gordon, co-sponsor of the ETHS Film Club. “The writing, filming and directing of the films is all done by students.”
The club, headed by Gordon and James Zoccoli, ETHS Safety officer and actor, recently began the process of film creation. According to Gordon, Zoccoli is helping in the artistic aspect of their films, while she mainly aides in the filming and editing process.
“The process of making these films starts with idea generation, which is where most of our students are right now,” says Gordon. “Then a script must be written, and then the casting and filming of the pieces. All in all, we hope to be done by early May.”
Gordon adds that while there have not been many serious films created by the Film Club in the past, all ideas are welcome, and any project that a student sees through until completion will be produced. Films this year cover a large variety of subject matter, including spy movies, mockumentaries, satirical pieces and even a Soap Opera spoof.
Sophomore Craig Johnson is currently working on his own short film, Advertasia. The film will consist of several short comedic sketches and will be about 20 minutes long, but according to Johnson, the process of creating a short film takes much longer than the end result shows.
“I first began writing the script for Advertasia in October of last year. Since then I have done several rewrites, and the script is just now becoming ready for film,” says Johnson. “Creating this film has taught me the importance of having other people read your work. Since I started creating Advertasia, the students in film club have given me feedback to improve the film overall.”
According to Gordon, the goal of the project isn’t only to create films. “We hope to see these students considering film as a future career, and allowing them to have complete creative control over their work is the best way to accomplish that,” she adds. “Throughout the creation of these films I expect to see these students grow both creatively and professionally.”
“This project has shown me how truly difficult it is to create an entire piece of art from scratch,” explains Johnson. “Now that I have done that, the amount of work that goes into big Hollywood films is really put into perspectiveand I appreciate the art of filmmaking even more.”
By writing and creating their own short films, the ETHS Film Club is allowing anyone with ambitions in filmmaking to learn useful skills about the industry, the creative process, and collaborating with peers, making their projects well worth the time.