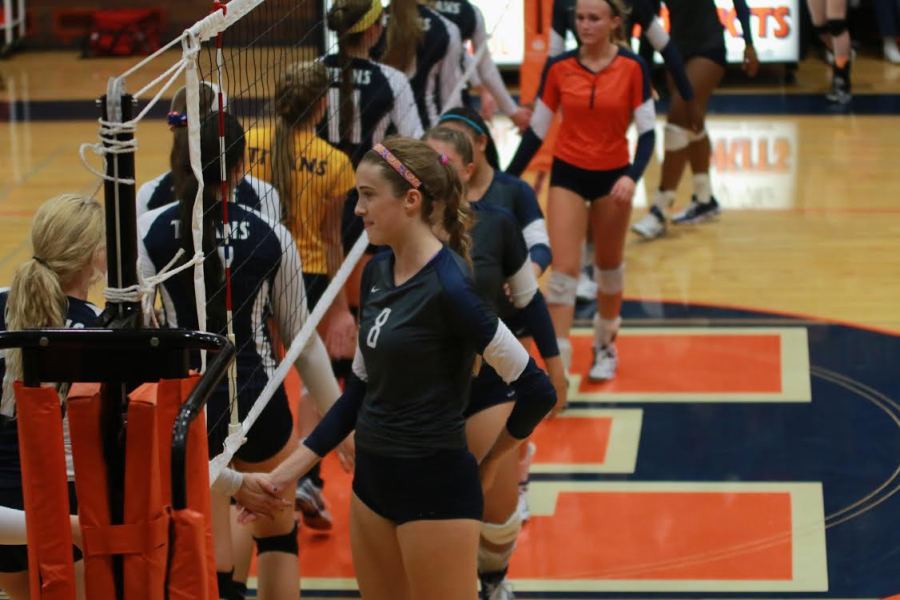 The team shakes hands with New Trier after the game.

Girls volleyball had an outstanding game early in the season against New Trier, but now the Trevians have a redemption match on their home court.

The girls have lost the last three of their four away game, “It’s always harder to play away,” said coach Pam MacPherson, “It’s one of the things we have been struggling with this season.”

Playing New Trier away from Evanston is a big concern for the team. “We have to be mentally tough,” said senior captain Aliana Alanguilan. “If we make a mistake, we need to know we can come back,” added Aliana. “We just need to come out strong and with a lot of confidence,” stated senior captain Wali Deutsch.

“Our mentality is being more strategic making sure we are playing smart but still being aggressive at the same time,” added Aliana.

Although the girls don’t have the best away record they are still confident. “I believe my team is ready for this match, I’m confident in the direction that we are going,” said Macpherson. “I think we still have the advantage this time because we have a lot of strong players across the board,” she explained.

Strategicallym the team will be facing New Trier with a 6-2 lineup different from last match lineup which was a 5-1. “They are already aware that we are running a 5-1, but that will help us against their big hitters,” said MacPherson. “We just need to play our game and play at a fast tempo,” said Deutsch.

The team is coming from placing 23 out of 24 teams in the Wheaton classic last month.

Last time the girls played New Trier in the beginning of the season the Kits knocked off the Trevians by a 25-22, 25-16 margin in the conference opener for both teams. “We have to bring the same mentality and energy like we did last time,” said Aliana.

Also helping out with the win last time was Ehize Omoghibo who had nine kills, and Christine Covode who had seven kills.

“Doesn’t matter who we are playing, we just have to take care of our part if we want to win,” said MacPherson.