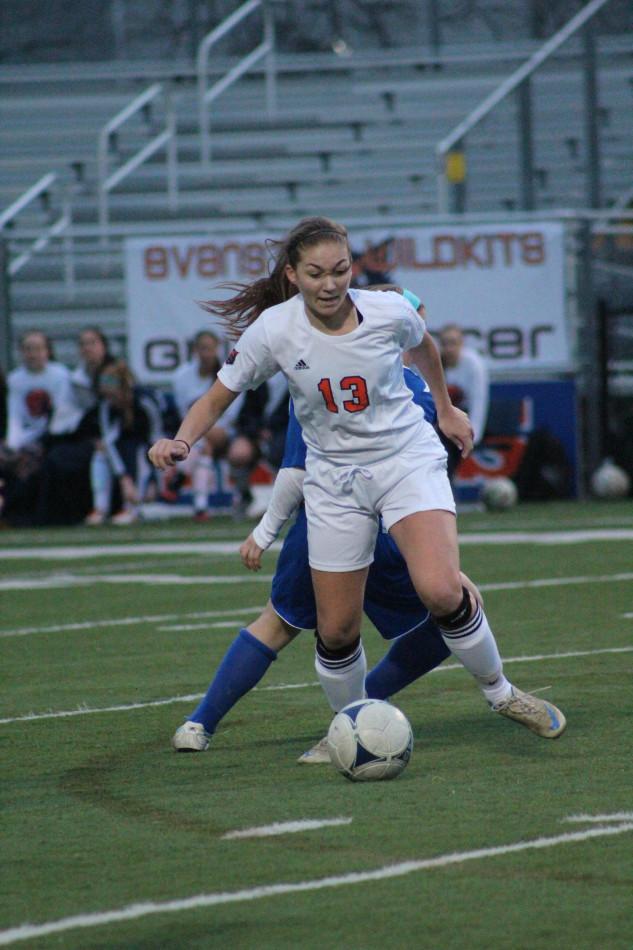 The girls soccer team is in great form as they prepare for the Naperville North Invitational this weekend, in part due to a more attacking-style formation.

“In the past, old coaches at Evanston used more defenders,” said coach Maurizio Grillo.  “We wanted to use more attackers to fit our players and our style, and to try to score more goals.”

The Kits will surely need some offensive firepower at the Invite.  One of the more competitive tournaments the squad will take part in, the Kits will head to Naperville along with fellow conference foe New Trier as well as Loyola.

Grillo says the Kits are especially wary of the Trevians, a perennial powerhouse in the state, after a grueling conference season.

“We have a lot of respect for every team in the conference, but we know that GBS and New Trier are always going to be very tough battles,” added Grillo. “We need to be at our best against them because they are among the best in the state.”

The Kits begin the group stages against Barrington and St. Viator, two solid squads, meaning they will have to be at the top of their game to advance to the knockout stages.

To this point, the Kits have been successful.  They stand at 13-4, and have made a surprising run to the consolation final of the PepsiCo Showdown after beating Stevenson 2-1 and York 4-3 after a dramatic penalty shootout.

The squad then took their talents to Toyota Park, the home of the Chicago Fire, on April 27 as they defeated Wheaton Academy 3-0. Juniors Maureen Kerr and sophomores Kira Favakeh and Alex Berkley netted goals en route to the victory.

It has been evident throughout the season that the Kits’ youth is especially strong, with skilled underclassmen in the midfield and veteran leadership at the front and in the back.

“Alex Berkley has been on Varsity since last year, and she continues to shine and step up her game,” said Grillo.  “Maia Cella is in a special position as a true freshman starter and she has shown a lot of ability.  I think the younger players are starting to have more leadership positions to combat the veteran leadership as well.”

The veterans have set an early example as well, with senior forward Morgan Muno providing a lethal scoring punch and fellow senior defenseman Lydia Hoopingarner locking things down at the back

“Even with the new formation, we still tried to play more defensive against teams like Loyola,” said senior forward Jane Zunamon.  “I think that shows that we are really skilled and have the ability to adapt and adjust our games accordingly.”

The potential is evident, now the Kits simply need to produce against the elite teams.

“We just have to keep working hard and have the faith in ourselves and each other that we can beat any team,” said senior captain defender Olivia Bates.

The stage is set for a furious finish, and the Naperville North Invite provides an excellent chance to make a run before the state playoffs.

The squad is prepared to take it.