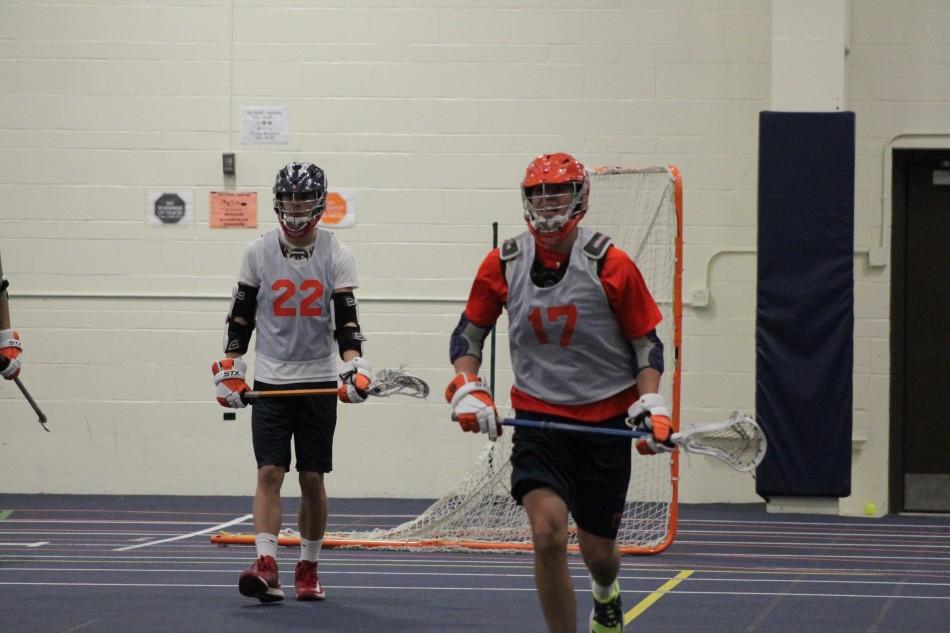 Seniors Charlie Cunningham(right) and Sam O'Donnell at a preseason practice.

While snow currently covers Lazier Field, boys lacrosse expects it will melt as they start the 2014 campaign hosting Maine South on March 17.
The Kits dominated the Hawks, winning 11-3 last year, and they expect more of the same this season.
“We have the tools this year,” said varsity coach Adam Hughes. “Many of our returning players will help the team greatly in taking us to the next level.”
Offensively, the squad will rely on seniors Aidan Crowe and Charlie Cunningham, both four-year varsity players. With Cunningham leading the team in scoring last year, Hughes knows that both Crowe and Cunningham will put an abundance of balls in the net.
“We have a lot of experience at the varsity level,” said Crowe. “We have been main contributors on the team since sophomore year so we’re hoping everything will come together this spring. It’s all FTB.”
Defensively, the team will look to junior and returning-starter, Jack Lydon, to stop opponent’s attack. Finally, junior Marcelo Porter-Dunning will defend between the pipes. Porter-Dunning saw a lot of time in net at the varsity level last year as a sophomore.
While Hughes knows that he has the personnel needed for success, he’s focused on making sure that the team can play at a high level for four quarters.
“We need to make sure that conditioning doesn’t play a factor, especially with the teams we are going to face this year,” said Hughes.“We lost a lot of our games in the fourth quarter last season, and we can’t make those mistakes this year.”
Last year, the team finished 8-7 getting eliminated in the first round of the playoffs.
“It wasn’t pretty. We should have been way better,” said Hughes.
According to Hughes, the team has faced these problems in the past. The Kits always have an ample amount of talent, but they struggle to gel. The team lost all-state defender Jack Egofske as well as defender and captain Jack Collins. The boys also said goodbye to the second leading scorer, Joshua Easington.
“We took some heavy blows with the departing seniors last year,” said Hughes.
Despite losing these players, the team is confident that they have the tools needed for an extremely successful season.
“We will be solid as long as we work on our discipline,” said Crowe.