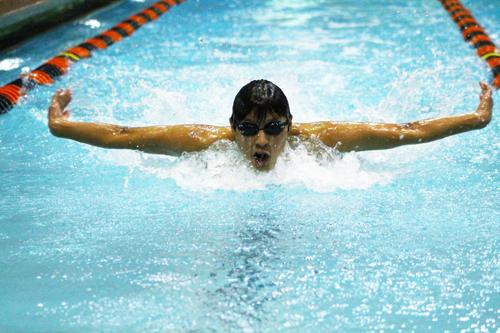 The Kits broke records at the state meet on March 1, a meet they hosted.
The 400 freestyle relay team of sophomore Adrian Lafont-Mueller, junior Ryan Knohl, and seniors Chris Russo and Joe Seguine-Hall finished second in the state with a time of 3:06.65. The time shattered the school record set by the 2001 team, who competed at nationals, as they swam a 3:06.93.
In the 400, Russo revived the team swimming them into second from sixth with a 46.72 in the second led. Seguine-Hall secured second when he swam a 46.09 in the anchor leg.
“When I hit the wall and saw we were under that record, it was on e of the best feelings ever for me,” said Seguine-Hall. “It’s very satisfying especially because we beat New Trier (sixth place) after living in their shadow the entire season. When it came down to it, we beat them when it mattered most.”
In the other relay, the 200 freestyle relay team finished eighth, as Seguine-Hall, Lafont-Mueller, Russo, and junior Christian Stankovich combined to swim a 1:26.76.
Individually, Russo and Seguine-Hall finished eleventh and twelfth respectively in the 100 freestyle with times of 47.16 and 47.42. The two seniors were thrilled to see each other succeed in their final races as Wildkits.
“The more you practice with someone, the better you get to know them,” said Seguine-Hall. “It was helpful to both of us getting to this point that we had the support of another teammate. We’ve both swam well all year and I think we were both happy for each other for being able to finish the season at this point.”
As a team, the squad finished tenth, its highest finish since 2005 when the Kits claimed the state crown. CSL South rivals Glenbrook South and New Trier finished fifth and sixth respectively.