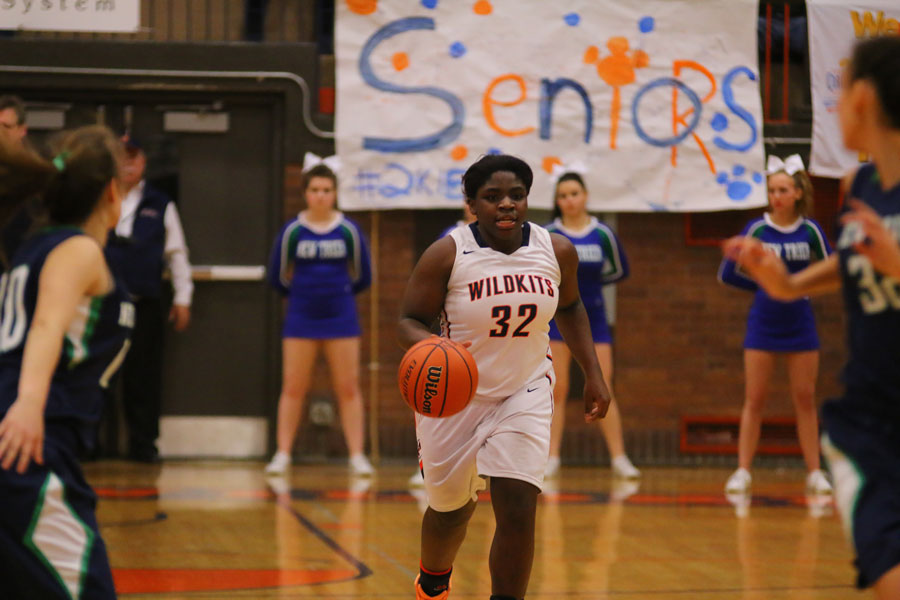 You should have been there.

After the longest game in program history, the Kits defeated Glenbrook South 62-57 after four overtimes,earning their spot in the Sweet Sixteen.

“I am seeing something that I haven’t seen yet. The girls won’t give up,” said coach Elliot Whitefield.  “The girls have learned how to stick together and support each other when things aren’t going well.”

A long game gave plenty of time for the sophomores to show their stuff. Leighah Wool scored 18 points with 17 rebounds, Hanan Richmond scored 20 points, and Savannah Norfleet had 15 points.

Girls basketball holds a 19-11 win-loss record before going into the Sectional Final Thursday against top-ranked New Trier. The 3rd ranked Kits lost to them in the regular season 50-25, but coach Whitefield has hope that the result will be different this time around.

“There have been bigger upsets in sports history than us beating New Trier. If we stay confident, anything is possible,” said Whitefield.

In the first game of the postseason, the Kits crushed GBN 59-22. Sophomores Cookie Boothe and Leighah Wool led the charge with 11 and 10 points respectively.

“This season our team has been able to perform under pressure and compete against really good teams,” said senior Adrianna Carter. “We’ve learned that we need to come out hard and fast, and play every quarter like it’s the fourth.”

Next, the Kits played Loyola in the Regional Finals. After trailing for the first three quarters, sophomore Leighah Wool scored a buzzer-beater with seconds to tie the game and keep postseason hopes alive. The Kits dominated in overtime, finally defeating Loyola 47-41. Savannah Norfleet led the team with 20 points.

“I’m proud that my team was strong enough to pull through and win Regionals,” said sophomore Krystal Forrester. “We played all the way to the end, even though we were down by 2 with 6 seconds left. We never gave up.”

After this season, the Kits say goodbye to four seniors, including captains Adrianna and Erica Carter.

“The Carters understand what the team is about and I think they showed the younger girls what it means to be a captain,” said coach Whitefield. “Our team is lucky to have so many returning players, and I have high expectations for next season.”