Get the most of ETHS and get involved in athletics 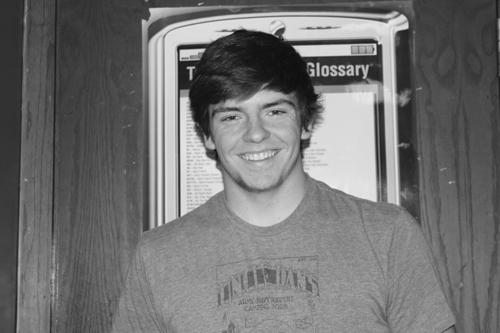 For me, high school would be nothing without sports.
The culture, the atmosphere, and the passion of high school can all be found on the court, the field, the diamond or in the pool. Sports are a prominent aspect of our time here at ETHS, and I want to strongly encourage every student reading this to get involved because it will only enhance your experience at ETHS.
Eight hundred and sixty nine kids participate in varsity sports at ETHS. That’s nearly one-third of the student population. Athletes swarm the halls, games are publicized over the intercom, rallies are held, fundraisers are attended, cheers are screamed, the colors of blue and green are spit on by the colors of orange and blue and why? Because sports matter. And sports can play such an important role in your high school career.
All ETHS athletes are challenged physically, mentally, and academically. There are expectations we must meet, but the benefits of participation are far greater than choosing to opt out.
Reporters Daniel Bowen and Collin Hint published, “High School Sports Aren’t Killing Academics,” in the October 2013 issue of The Atlantic, expressing how being a part of a team actually gives us an edge both socially and academically.
It’s true that our time here at ETHS is defined by so many experiences, but being on a team—to compete and to represent your school—delivers an untouchable sense of pride and achievement. You can be a part of something bigger, something that puts your name into Wildkit history. Memories are made on the field, on the court, or even on the track.
There are countless stereotypes thrown around, depicting high school as being plagued with illiterate jocks who run the school—meathead athletes who form a power circle of only themselves. This vision taints the true image of high school athletics, and it is certainly not true here at Evanston. What the teams here provide is not an inside track to the most popular clique, but a tight-knit family.
Those of you who commit yourselves to athletics get to experience a bond few others can. There is also an emotional aspect that accompanies being part of a team, and as you compete with that group over the course of four years, you develop a sense of trust and brother/sisterhood.
Having had the opportunity to walk out on the diamond and play ball for this school for four years, I can say that that experience has shaped me more than almost anything else. I grew as both a ballplayer and individual, but most of all I got to be a part of something at ETHS outside of just academics.
My teammates became brothers, and my coaches became figures I looked up to. What I have learned from a leadership standpoint could never have happened if not for sports. When students are put into positions where they must come to together in order to succeed, leaders will emerge.
Looking back on the countless hours spent in the weight room, 6 a.m. field house practices or frigid 20 degree games, I can honestly say high school would not have been as enjoyable without all of it. While I’ll miss my teachers, snacks from lunch, and certain hallway encounters, the hardest thing to say goodbye to will be my team.