Tied up in tech

We are too dependent on machines 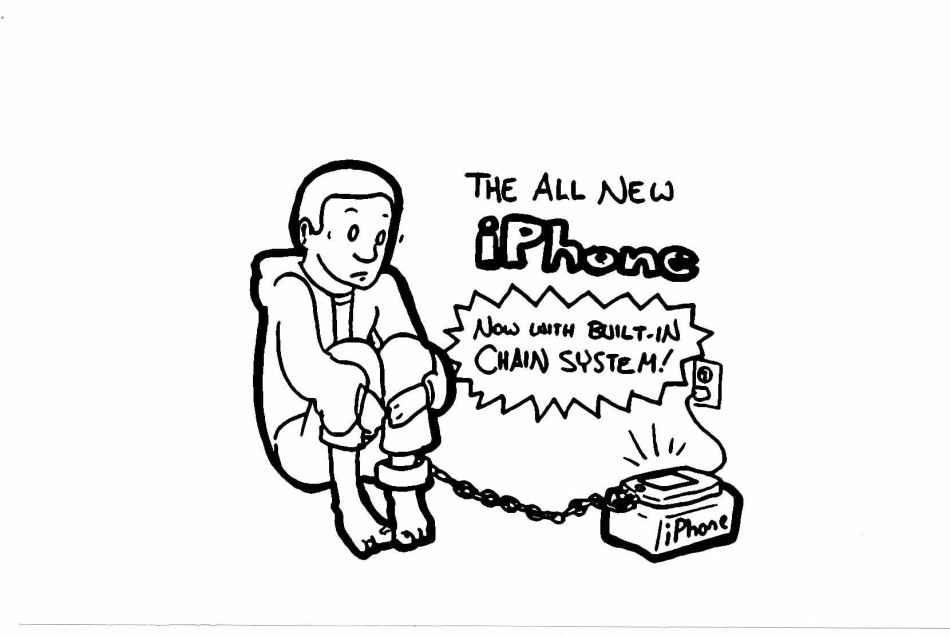 We are shackled to technology.
Whether it is to our phones, computers, Siri, Wikipedia, or even Google, we rely too heavily on modern technology these days. While our parents used to go to a library and look up information in a book, we have gotten to the point where we only do so using devices developed during the last five to 10 years. While this isn’t necessarily a crisis-level problem as of now, it could trend into something very unfortunate later.
First, technology has made some incredible advances in the last few years. We have pieces of machinery now that we could not have even fathomed only a few years prior. Not only has machinery improved, but its usage has too. According to the American Government Census, 85% of American households have a computer and 70% of households have access to the Internet. Using technology isn’t necessarily bad by itself; it is making us lazy because we rely on it way too much.
For example, gone are the days when books have held information, or handwritten letters were a form of appreciation. Everything we as a society do has to do with technology, and it is rapidly replacing the good “old fashioned methods” of doing everything. If we want to communicate with someone, we don’t find them and talk to them face to face, we send them a text or an email. This trend of us exclusively relying on our phones, computers, or the internet is frightening, mainly because we should not be so dependent on one thing in our lives. We are getting way too attached to something we don’t need to be attached to.
On the other hand, with the advances in technology we have been making, it is clear that the trend will only continue, and it is unlikely that we will have a great revival of using “old fashioned” machines to do our work for the sake of nostalgia, but being super reliant on one thing and one thing only, ie. our computers or the internet, is not a healthy habit to be in. The fact that these things monopolize our way of living is not a good way to be existing.
Completely abandoning technology would be foolish, but we need to find a reasonable balance. For example, while it is great that we can use our phones to look something up on Wikipedia, we should also be able to go to a library and know how to look up something in a book. We should not let ourselves perform actions exclusively through new technology.
In conclusion, we need balance. We can still use the new forms of technology that are coming out, but we cannot rely on them exclusively to live. We need to know how to operate without them, so that if we ever find ourselves without them, we are able to fully function.