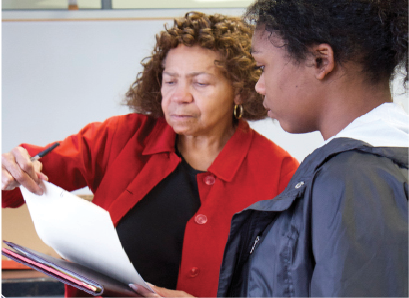 Don’t forget your popcorn and soda when you go to the NAACP Film Festival tonight.

“Students will get the opportunity to view older films directed or produced by blacks that may not be in their film collection,” said cosponsor of the NAACP, Marvin Green.

The festival will take place every Friday after school in the Little Theater throughout Black History Month.

The NAACP is an organization that focuses on on the advancement of colored people. The film festival is organized by the ETHS chapter.

“The club allows students to discuss certain current racial issues from a teenagers persepctive based on the NAACP principles,” added Green.

“Spreading awareness about black culture is one of the main purposes of Black History Month,” said senior Lisa Hayden.

“The film festival accomplishes this by not only educating people but allowing them to experience black culture through the entertaining, colorful plots of these films,” she adds.

Last year, the films shown were ​School Daze, Get on the Bus, Good Hair,​ and​ The Great Debaters.

“The students in the NAACP organization decide which films to show,” said Green. “They get a consensus from their own peers on what movies they are interested in watching.”

The film festival is free and open to all students.

“It’s important for people of all colors to attend the festival as a way to support Black History Month, and to celebrate the achievements of the actors involved in the projects,” said NAACP co-sponsor Baccet Levy.

“Whether the movies are new or old, they help us understand a lot about the traditions, societal norms, and controversies happening in and around the black community,” said Hayden.

“I think for this reason, everyone should come to this year’s film festival because these films will teach or remind us of the richness and diversity of black culture.”

This year, the festival will show ​Fruitvale Station, Undefeated, When it Rains, and ​12 O’clock Boys.

So come and join others in learning, sharing, and enjoying the festivities of Black History month.